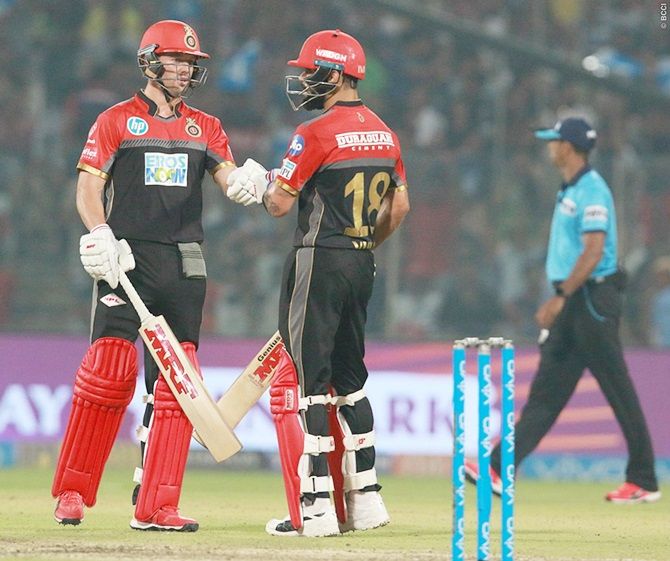 IMAGE: Royal Challengers Bangalore's A B de Villiers, left, and Virat Kohli during their 118-run stand off 64 balls against Delhi Daredevils at the Feroz Shah Kotla, in New Delhi, on the May 12. Photograph: BCCI

Virat Kohli's love for targets is well-known and it's a no-brainer that the Royal Challengers Bangalore captain would ideally like to chase down totals in the remaining games of the Indian Premier League.

Kohli scored a polished 70 off 40 balls as RCB chased down a target of 182 against Delhi Daredevils in 19 overs.

Still with an outside chance of qualification, Kohli wants to make the most of it as he feels that the table is wide open.

"We were not clinical with the ball, but these guys played well. The chase, however, was ideal.

"Bowling first is better at this stage, because it's easier for batsmen to take responsibility. You can almost set up the game how you like. That's what works for our boys," Kohli said at the post-match presentation ceremony.

AB de Villiers was also in great touch, scoring 72 off 37 balls, and Kohli said that there is nothing easier than playing alongside Proteas legend.

"It is lovely batting with AB. We have done this many times in the past. It was a stiff chase, but in the mid-innings break, AB told me 'don't worry, we'll get this', and that helped me get in the zone. I don't need to say much. It has been an honour for me to bat with him."

Kohli said he got out in his bid to up the net run-rate.

"I was disappointed getting out since we had the run-rate in control. Wanted to finish it with three overs to spare and get the net run-rate up. It cost us 10-12 balls to get the victory."