'I think from last time round, I have become more assured of myself, I don't really find the need to prove anything to anyone.' 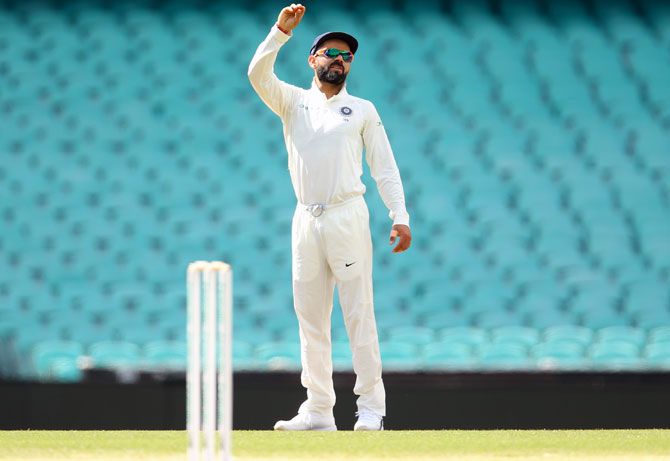 IMAGE: Virat Kohli was involved in sledging war with the Australians in India's previous tour in 2014-15. Photograph: Jason McCawley/Getty Images

India captain Virat Kohli says he is now more assured of himself than the last tour Down Under and and does not feel the need to get involved in any confrontation with the Australians in the upcoming Test series.

Kohli will look to realise India's dream of winning a Test series on Australian soil when he leads the team in a four-match contest, starting with the opening match at Adelaide on December 6.

Known for his on-field aggressive temperament, the 30-year-old Kohli was involved in sledging war with the Australians in the previous tour but the India captain says he has learnt from his past experience and does not expect any such incident happening during the series.

"I think from last time round, I have become more assured of myself, I don't really find the need to prove anything to anyone," Kohli told Macquarie Sports Radio.

"In the early stage of my career I used to think of these things as important milestones which are really important in one's career, but now the focus is purely and solely on making the team win at any cost.

"So ... I don't find the need to get involved in anything with the opposition and I think those are changes that keep happening gradually as you go forward," he said.

Ever since Australian cricket plunged into crisis following the year-long ball-tampering bans on Steve Smith and David Warner, there has been a lot of discussion on the spirit of the game and bringing a change in the culture of the Aussies.

Kohli, who has scored 6331 runs including 24 hundreds from 73 Tests at an average of 54.57, still expects an aggressive battle on the cards.

"Not really, you might not see the same kind of stuff that happened in the last series. But I think in terms of their body language and intent that they have, I'm sure they're still going to be aggressive in their minds," said Kohli, who has scored over 10,000 runs at a whopping average of 59.83 in ODIs.

"That's the way Australia have always played, I don't think there's any other way they like to play their cricket. I don't see any incidents happening on the field, I think it's going to be competitive cricket," the India captain said.

"They're definitely going to bring their A-game and expect us to bring ours, so we definitely expect stiff competition from Australia as always and we're definitely not taking anything for granted."