Pakistan produced a clinical display to beat Sri Lanka by six wickets and storm into the final of the Asia Cup tournament in Mirpur on Thursday.

Their second successive victory put them in the final of this four-nation tournament for the first time in 12 years.

After bundling out Sri Lanka for a paltry 188 in 45.4 overs, the Pakistanis rode on captain Misbah-ul Haq (72 not out) and Umar Akmal's (77) record 152-run partnership to cruise to victory with a bonus point and with 61 balls to spare at the Sher-e-Bangla National stadium.

Pacer Aizaz Cheema (4 for 43) and spinner Saeed Ajmal (3 for 27) had earlier played a big role in ripping through the Sri Lankan batting, which paid the price for poor shot selection. 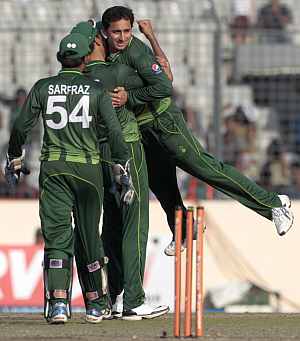 Only Kumar Sangakkarra (71) and Upul Tharanga (57) put up decent knocks.

The defeat virtually knocked Sri Lanka out of the tournament, as they lost both their league matches, the first to India by 50 runs on Tuesday.

If India beat hosts Bangladesh on Friday, the arch rivals will clash in the summit showdown on March 22, rendering the Bangladesh-Sri Lanka league match consequential.

Pakistan did well to recover from early jolts as Misbah and Akmal played sensibly to overhaul the target.

Chasing the modest target, the Pakistani openers began cautiously before getting into a more attacking frame of mind with Nasir Jamshed cracking a couple of delightful boundaries off Nuwan Kulasekara.

The islanders struck in the ninth over through Suranga Lakmal, who evicted Jamshed, who went for a pull but only succeeded in giving a catch to Upul Tharanga.

From 29 for no loss, Pakistan suddenly slumped to a precarious 33 for three as Mohammad Hafeez (11) and the veteran Younis Khan (2) perished in quick succession.

Spinner Seekkuge Prasanna struck in his very first over to get rid of Hafeez as he went for a drive to a flighted delivery and offered a catch to Dinesh Chamdimal at backward point.

Nine balls later, Younis Khan joined him in the pavilion after Farveez Maharoof produced a brilliant catch at the mid-wicket region off Lakmal.

Maharoof ran in from mid-on and just about scooped the ball inches from the ground.

Captain Misbah-ul Haq and Umar Akmal then steadied the ship as they batted cautiously to gradually wriggle out of the tight situation.

The two batsmen then unleashed a barrage of strokes to completely tilt the game in Pakistan's favour as they took the score close to the target Akmal perished.

Earlier, Sangakkara and Tharanga waged a grim battle, adding 96 runs for the fifth wicket, but the Lankans needed more, which they could not, against the pace and spin combo of Cheema, Gul and Ajmal.

Cheema, before his remarkable comeback, was clobbered for 17 runs in his first over.

While Jayawardene blasted the pacer for three fours in the second over, Dilshan joined the party with two consecutive fours in the fourth over off the same bowler.

However, Cheema had the last laugh as he lured Jayawardene into attempting the aerial route, which led to his dismissal. The Lankan skipper was caught by Mohammad Hafeez at extra cover.

Cheema soon had his revenge on Dilshan with a short-pitched delivery. The opener went for a pull even as the ball reared at him quickly from back of a length, resulting in a top-edge, which Ajmal held around mid-wicket.

Sri Lanka slumped into furether misery as Dinesh Chandimal guided a sharp delivery from Gul to the slip cordon, where Younis Khan completed a brilliant, diving catch to his left.

Pacer Hammad Azam made the Sri Lankan scoreline read 65 for four in the 15th over when he accounted for Lahiru Thirimanne (7), who was caught by Umar Akmal at point.

Tharanga then joined hands with former skipper Sangakkara to steady the Lankan ship. Both batsmen were happy to score in singles and doubles as they took Sri Lanka past the 100-run mark in the 26th over.

Sri Lanka had to wait for their first boundary for 58 balls after the collapse of Thirimanne, when Tharanga cut a loose delivery from Shahid Afridi through extra cover.

Both batsmen adopted a more cautious approach while keeping the scoreboard tickling. Sangakkara looked solid with his defense and front-foot drives.

He and Tharanga reached their respective fifties in the 33rd over, bowled by Afridi, which also took Sri Lanka past the 150-run mark.

Sri Lanka took the batting powerplay in the 36th over but were only made to regret their decision as Ajmal breached Tharanga's defense with his doosra, which crashed into the middle and leg stump.

Ajmal struck again as he flummoxed Farveez Maharoof (2), again with his doosra, which turned away sharply.

Gul snared his 150th ODI victim when he had Nuwan Kulasekara (4) caught by wicketkeeper Sarfaraz Ahmed to make the scoreline read 172 for seven.

Trying to cut loose after watching wickets tumbling at the other end, Sangakkara was bowled by Cheema in the 43rd over. 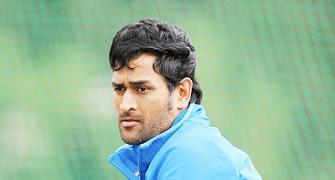 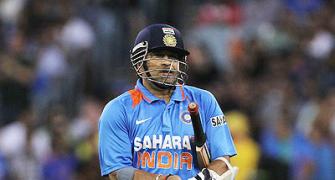 ICC rankings: Tendulkar looks for improvement
C B Series: Only Kohli among 10 most valuable players 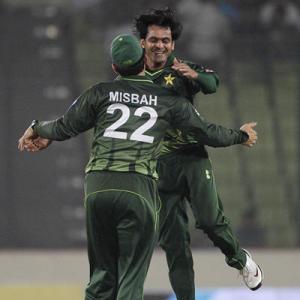 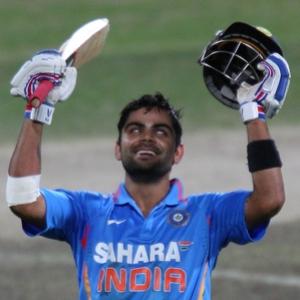