Pakistan regained the Asia Cup title after a gap of 12 years as they pulled off a nail-biting two run victory against Bangladesh who came agonisingly close to a historic triumph but ran out of steam in the dying moments to go past the target in Mirpur.

Pakistan were restricted to a modest 236 for nine but held their nerve to stop the spirited hosts at 234 for eight, shattering Bangladesh's hopes of notching up their maiden Asia Cup title.

It was a case of so near and yet so far the hosts who reached the final for the first time and very nearly upstaged their fancied opponents in a tournament in which they upset world champions India and Sri Lanka.

The hosts needed nine runs of Aizaz Cheema's tense last over but fell short by two runs as a stunned silence descended on a fully packed Sher-e-Bangla National stadium.

The in-form Shakib Al Hasan (68) and Tamim Iqbal (60) were the notable performers for Bangladesh but none of the other batsmen could come up with significant scores to tilt the scale in their favour.

Chasing a modest target, Bangladesh made a watchful start to their run chase as openers Tamim Iqbal and Nazimuddin (16) shunned extravagance and looked to keep their wickets intact and soon cantered to 62 for no loss in the first 15 overs.

With left-handed Iqbal in full flow, Saeed Ajmal was introduced into the attack but Bangladesh still picked up a lucky boundary, this time between the wicketkeeper and the leg slip. 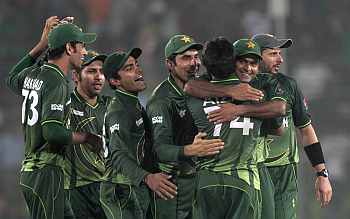 While Tamim flourished, Nazimuddin struggled against the spinners. He survived a leg before decision in the 10th over and could have been out in the 12th over as well when he hit hard a Aizaz Cheema ball but Hammad Azam could hold on to the catch at the third man area. All rounder Shahid Afridi finally made the breakthrough in the 17th over, dismissing Nazimuddin. Trying to play a lofted shot, the opener ended up giving a catch to Younis Khan near long-off.

Six balls later, Ajmal struck another blow as he deceived newcomer Jahurul Islam with his doosra and his outside edge rested in the safe hands of Younis at slip.

In the 24th over, Gul got rid off well-set Tamim to put Bangladesh under pressure. Looking for a pull, the left-hander ended up miscuing it towards extra cover and Younis didn't make any mistake.

With two new batsmen -- Nasir Hossain (28) and Shakib Al Hasan (68) on the field, Pakistan tightened the screw to dry up the runs for the hosts.

The two batsman build up a steady partnership and took Bangladesh to 153 for three in 40 overs. Shakib brought up his fifty with a lofted short over midwicket for a boundary in the next over.

Needing 77 runs off 54 balls, the left-hander then changed gears and blasted Cheema for the first six of Bangladesh innings over deep midwicket.

However, Gul dismissed Nasir Hossain in the next over to derail their chase. Looking for a pull, Nasir ended up giving an easy catch to Misbah-ul-Haq at mid-wicket.

Shakib picked up another boundary with a scoop over short fine but Cheema got rid off the batsman in the 44th over when looking to play a pre-determined shot at the fine leg area, he ended up losing his stumps.

Earlier, halted Pakistan within a reachable target with the help of some fine bowling.

But some lacklustre bowling by Shahdat Hossain towards the end and useful contributions from Shahid Afridi (32) and wicket-keeper Sarfaraz Ahmed (46 not out) propelled Pakistan to 236 for nine.

Shahdat gave away 19 runs in the final over of the innings and was guilty of bowling two no-balls, which not only boosted Pakistan's score but also their confidence.

Young Sarfaraz top-scored for Pakistan with an unbeaten 46, while Shahid Afridi played a 22-ball 32-run cameo to wriggle Pakistan out of trouble.

Left-handed opener Nasir Jamshed was the first Pakistani batsman to depart in the fifth over, handing a simple catch to Mahmudullah at cover of a slower delivery from Mortaza while trying to clear the in-field.

Five deliveries later, it turned out to be double celebrations for Bangladesh when Nazmul trapped veteran Younis Khan plumb in-front of the wicket.

Hafeez and captain Misbah-ul-Haq (13) tried to resurrect the innings with a 31-run stand before the latter perished in search of a tight single.

A brilliant Nazmul caught Misbah short of the crease at the non-striker's end with a direct throw after the batsman hesitated in starting off the blocks for the single.

To make matters worse for Pakistan, Hafeez, who got a reprieve on seven, failed to capitalise on the chance after doing all the hardwork and fell on 10 runs short of his fifty.

Hafeez was caught by Nazmul off Abdur Razzak at mid-on as he tried to break the shackles.

With Pakistan in shambles at 70 for four, Umar Akmal and Hammad Azam joined hands and did a small recovery act, stitching 59 runs before two more quick wickets spoiled their hardwork.

Both Akmal and Azam gave away their wickets after scoring identical 30s.

Akmal played the role of a sheet-anchor and scored his runs off 45 balls with the help of just one six, while Azam tried his luck and clobbered three boundaries and a six during his 37-ball stay.

Reduced to 133 for six, Afridi played a cameo and together with wicket-keeper Sarfaraz Ahmed added 45-runs in just 44 balls to stretch Pakistan's struggling innings.

Afridi managed 32 off 22 balls and hit four boundaries and six before miscuing a full toss off Shakib which a diving Nasir Hossain glefully accepted.

Photograph:Pakistan's cricket team celebrate after they won the final match against Bangladesh at the Asia Cup Cricket Tournament 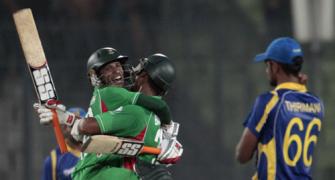 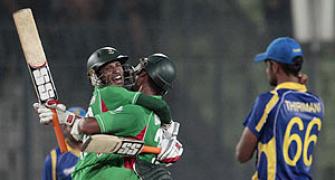 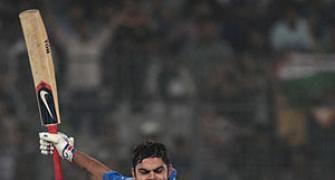 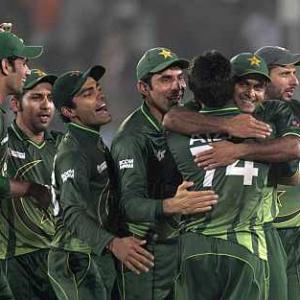 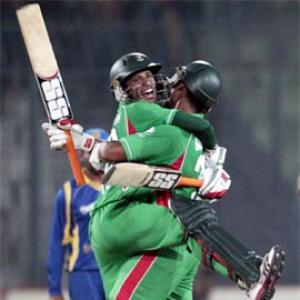