News
Business
Movies
Sports
Cricket
Get Ahead
Money Tips
Shopping
Sign in  |  Create a Rediffmail account
Rediff.com  » Cricket » Ashwin takes 5 but Bangladesh hold on for a draw in rain-hit Test Ravichandran Ashwin claimed a five-wicket haul but Bangladesh held on for a draw despite being asked to follow-on by India in the rain-marred one-off Test, in Fatullah, on Sunday.

With more than 250 overs lost during the duration of the match because of rain on all five days, India ran short of time, but still showed positive intent by scoring quickly and asking Bangladesh to follow-on in pursuit of an unlikely victory.

Replying to India's first innings score of 462 for 6 declared, the hosts, resuming on 111 for 3 after the morning session on Day 5 was washed out, were bowled out for 256 in 65.5 overs -- seven runs short of the follow-on.

While Ashwin, with excellent figures of 5 for 87 from 25 overs, bamboozled the Bangladeshi batsmen with vicious turn and bounce, Harbhajan Singh made a good comeback, claiming three wickets for 64 runs.

In the process, the Punjab bowler also became the ninth highest wicket-taker in the history of Test cricket, surpassing Pakistan legend Wasim Akram, by swelling his tally to 415 wickets.

Skipper Virat Kohli then tried to drive home a point by asking Bangladesh to follow-on in what was an inconsequential final hour of play on the concluding day in which only two sessions were possible because of overnight rain.

When play was finally called off, Bangladesh were 23 without loss from 15 overs in their second innings.

Imrul Kayes (72) was Bangladesh's top-scorer in the first innings, but it was the young Litton Kumar Das who stole the limelight with an entertaining 44 off 45 balls, inclusive of eight fours and a six, on debut, before he was caught by Rohit Sharma at backward short leg off Ashwin.

Soumya Sarkar (37), another youngster, also impressed though he failed to build after a good start. Playing a loose shot against pacer Varun Aaron, he was bowled off an inside edge.

With rain washing out the morning's session, play only commenced post-lunch, and it was dominated by Ashwin. He first had Shakib al-Hasan (9) caught behind, wicketkeeper Wriddhiman Saha taking a sharp catch.

Left-handed Sarkar then adopted a positive approach, pulling Ashwin for a boundary and following it up with a lofted drive over mid-on, while Imrul Kayes, another left-hander, also hit the occasional boundary to keep the scoreboard ticking during the pair's 51-run stand for the fifth wicket.

Harbhajan captured his second wicket when he beat Kayes (72) with flight and had him stumped by Saha, who had a good match behind the stumps.

In the next over, Sarkar was scalped by Aaron, but India were in for a surprise as Litton started attacking the bowlers.

He first swept Harbhajan for a boundary and pulled Aaron over mid-wicket for his second four in the following over. When Ashwin returned to the attack, Litton lofted him over mid-on for the first six of Bangladesh's innings and then slog-swept him for a boundary off the next delivery.

Umesh Yadav was also hit for a couple of fours by Litton, who was keen to counter-attack the Indian bowlers.

Shuvagata Hom (9), who defended dourly at the other end, however, became Ashwin's fourth victim when he was caught at short-leg.

Once Litton was out after tea, the follow-on was imminent as Harbhajan accounted for Mohammed Shahid and last-man Jubair Hossain was run-out for a duck. 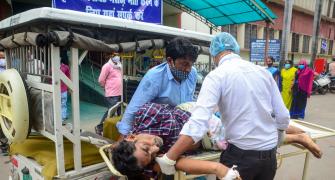