'He is hardly 31, 32 years old and can play for another 4-5 years at least but it will also depend on how he performs and remains injury free.' 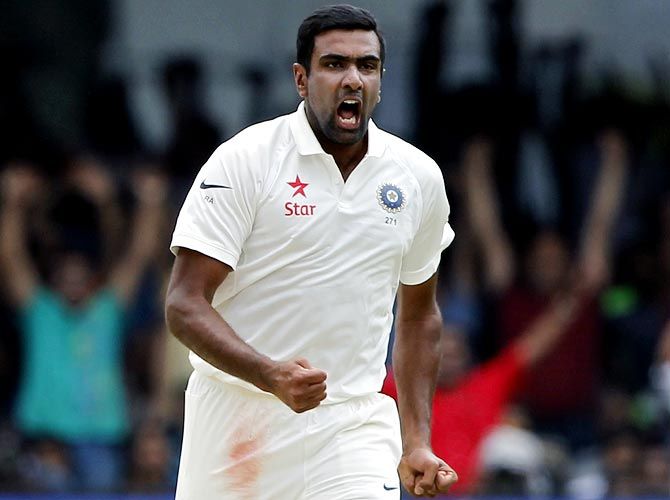 Sri Lankan spin legend Muttiah Muralitharan feels India's Ravichandran Ashwin is presently the best spinner in the world and his achievements with the ball are a testimony to his greatness.

Ashwin became the fastest bowler to reach the milestone of 300 Test wickets in his 54th match, breaking Dennis Lillee's record during India's convincing win over Sri Lanka in the second Test in Nagpur on Monday.

And Muralitharan congratulated the Indian off-spinner on his achievement.

"I want to congratulate him. It's a big achievement as getting 300 Test wickets is not an easy job. Definitely, he is the best spinner in the world at the moment," Muralitharan said.

"He is not in the One-Day team but hopefully he will return and do wonders in the shorter formats also," said the spin legend, who holds the world record of capturing 800 wickets in 133 Test matches.

Ashwin is also ahead of some of the illustrious names, who had completed the milestone in quick time. Among them are Muralitharan (58 Tests), Richard Hadlee, Malcolm Marshall and Dale Steyn (61 Tests each).

"He is hardly 31, 32 years old and can play for another 4-5 years at least but it will also depend on how he performs and remains injury free. Only time will tell as it will be very hard for him after 35," said Muralitharan.

Besides, Ashwin also has 150 ODI wickets from 111 matches.

Not just quality of two teams but overkill of contests have taken the sheen out of India-Sri Lanka series, a fact which was recently endorsed by India captain Virat Kohli.

Asked Muralitharan about the issue, he gave a tongue-in-cheek reply.

"I can't say there is too much of (India vs Sri Lanka) cricket but may be Virat is getting bored of winning every time," he said.

While Muralitharan complemented the current Indian team under Kohli for its level of consistency, he expressed serious concern about the sorry state of Sri Lankan cricket.

"India is a very good side and I rate them very high. You can't take credit away from India by saying that Sri Lanka is a weak team. They are doing really well in every format," he said.

"The alarm bells (in Sri Lankan cricket) have rang two three years ago. For me it's a matter of great concern. You lose sometime but this team is losing a lot and that is a major worry," a concerned Muralitharan said.

"Young cricketers are not coming through. They are not performing. That's the biggest concern we have," concluded the spin great.