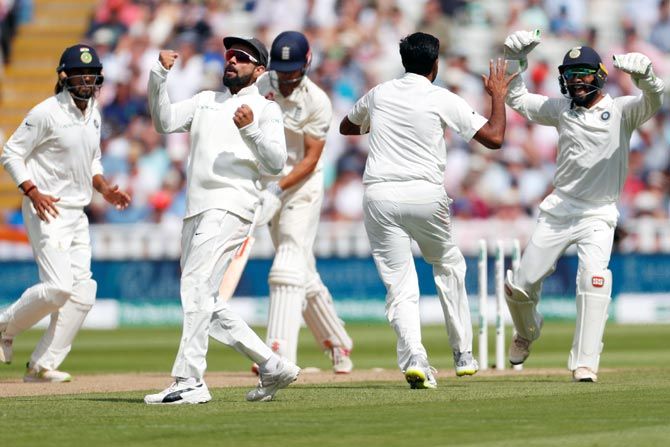 Off-spinner Ravichandran Ashwin produced one of his most impactful performance outside the sub-continent as India reduced England to 285 for nine on the opening day of the first Test in Birmingham, on Wednesday.

Ashwin picked up four for 60 to register his best figures in Test cricket across South Africa, England and Australia as the hosts lost six wickets for 69 runs in the final session of play to find themselves in a precarious position after opting to bat.

Joe Root top scored with a fluent 80, laced with nine fours, but the English innings completely got derailed after his dismissal.

At stumps on the opening day, Sam Curran was unbeaten on 24 with James Anderson for company.

In the final session of the day, India didn't begin well with England progressing as Jonny Bairstow (70) brought up his 18th Test half-century off 72 balls.

In doing so, he put on 105 runs with Root for the fourth wicket from 138 balls as England crossed 200 in the 62nd over and were looking set for a strong total before things unravelled in the most odd fashion. 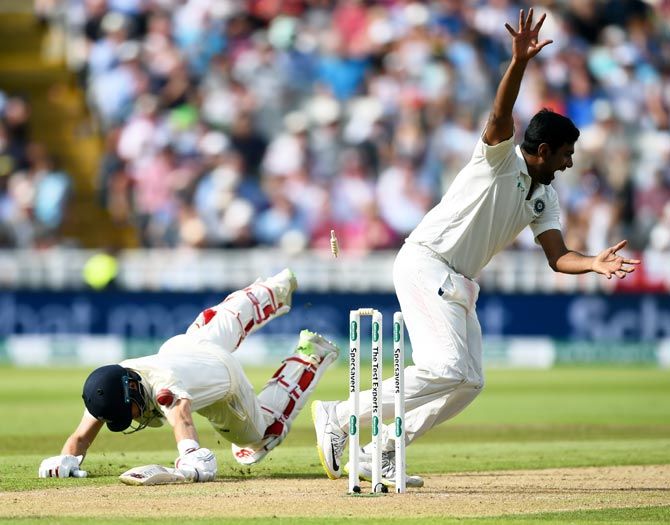 In the 63rd over of the innings when Virat Kohli's direct throw from midwicket ran out Root as he responded to Bairstow's call for a tight second run.

That dismissal changed momentum of the innings with England collapsing from that point onwards.

England lost three wickets for eight runs in the next 25 balls. First, Bairstow played on off Umesh Yadav and Ashwin trapped Jos Buttler lbw for a two-ball duck.

Sensing a kill, India never let go the pressure in the remainder of the session. Every time England tried to build a partnership, Indian bowlers struck back and it resulted in regular wickets.

Ashwin dismissed Ben Stokes (21) with a return catch in the 75th over as England slipped to to 243 for seven.

A 35-run partnership between Adil Rashid (13) and Curran raised visions of a fightback but Ishant Sharma trapped Rashid leg before wicket with a sharp inswinger.

Ashwin accounted for Stuart Broad (1), dismissing him LBW, but Anderson somehow managed to thwart his efforts for a five-wicket haul.

Earlier, Mohammed Shami struck twice in the second session before  England skipper Root scored his 41st Test half-century to guide the hosts to 163 for three at tea. Shami bowled an incisive spell after lunch, dismissing Keaton Jennings (42) and Dawid Malan (8) as India piled on the pressure in the second session.

Jennings was the first to go, but in an odd manner. Just prior to his dismissal, there was a pigeon near the pitch that distracted him and in the very next ball, he played on after the ball clipped his pads. 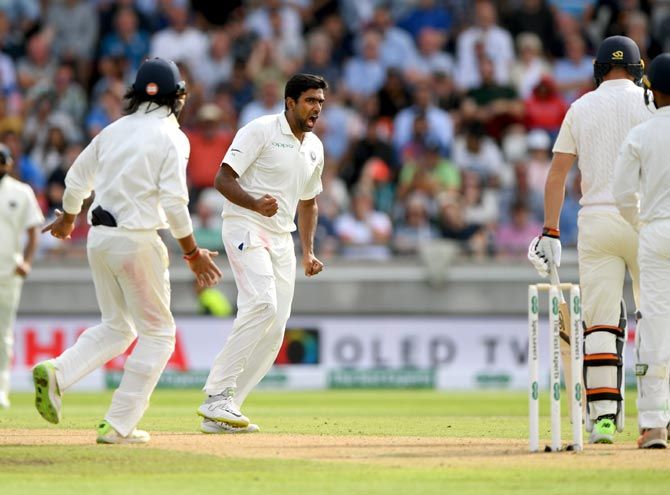 It was a lucky breakthrough for India as their pacers found movement after the break. Ishant and Shami bowled closer to the England batsmen and made them play more often with the latter reaping reward.

Ashwin had a loud lbw shout against Malan which was turned down as India lost a review. But Malan never looked comfortable against Shami, who trapped him lbw eventually in the 40th over. The ball was doing just enough, and even DRS didn't help the batsman.

Bairstow though made sure that India didn't get an upper hand on the proceedings by adopting an attacking approach against Ashwin.

Opting to bat, England consolidated their position despite losing Cook early, reaching 83 for one at lunch.

Ashwin was the only wicket-taker for India in the pre-lunch session, bowling Cook (13) with a ripper in the ninth over. The ball pitched on middle and turned away to knock back Cook's off-stump. 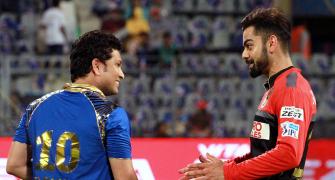 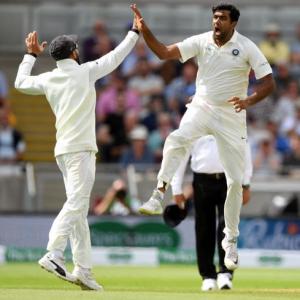 PHOTOS: Ashwin leaves England in a mess on Day 1 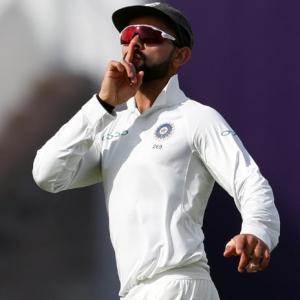