Images from Day 4 of the fourth Ashes Test, at Old Trafford, Manchester. IMAGE: Pat Cummins picked up two wickets in two balls from his opening over. Photograph: ICC/Twitter

Australia took a giant step towards retaining the Ashes in the fourth Test at Old Trafford on Saturday after they left England needing 365 runs to win with eight wickets remaining heading into the final day.

After declaring their second innings on 186-6, with a lead of 382, Australia heaped the pressure on England as Pat Cummins took two wickets in two balls to leave Joe Root’s side reeling, before the hosts regained some composure to reach 18-2 at the close.

Victory for Australia, who bowled England out for 301 early in the day, would ensure they retain the urn, taking a 2-1 series lead into the final Test at The Oval next week.

Although England’s astounding comeback win at Headingley will give them some hope, the winning target looks well out of reach for the hosts who must hope they can somehow bat through the day to foil the tourists.

Australia had half an hour at the end of the day to attack England’s top order and paceman Cummins had instant success.

With the third ball, Rory Burns found a leading edge and looped his shot to Travis Head at mid-off and then, with the next ball, he clean bowled England skipper Root.

With England’s two top scorers from the first innings back in the pavilion, Australian tails were up but Jason Roy kept out the hat-trick ball and England made it to stumps with no further casualties.

Although Australia were on top for most of the fourth day, there had been moments when England showed some fight. 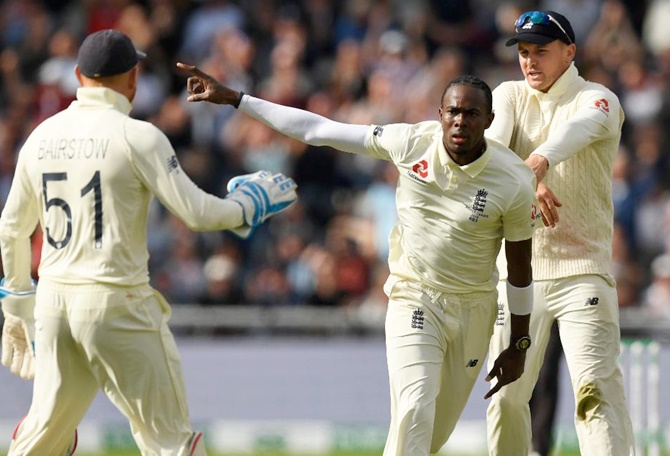 IMAGE:There was some brilliant bowling from Jofra Archer. Photograph: ICC/Twitter

With a handsome first-innings lead of 196, there was little pressure on the Australian batsmen but there would have been some concern after Stuart Broad made early inroads.

Broad, the pick of England’s bowlers in this Test, made the perfect start, trapping David Warner lbw for a duck. The left-hander has been dismissed without scoring by Broad in his last three innings. 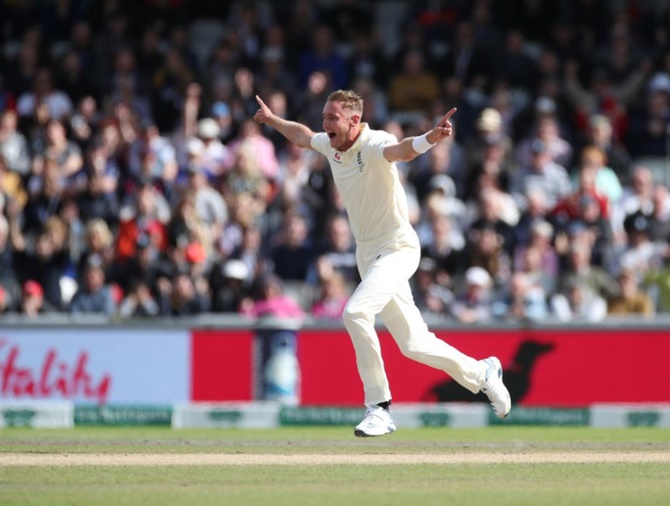 Marcus Harris was also leg before to Broad, failing with his review attempt, and when Marnus Labuschagne was trapped in front by Archer, Australia were wobbling at 24-3.

There was no debate about Travis Head’s departure, as Archer sent his middle stump flying and Australia headed into tea with Steve Smith on 14 and Matthew Wade on eight. 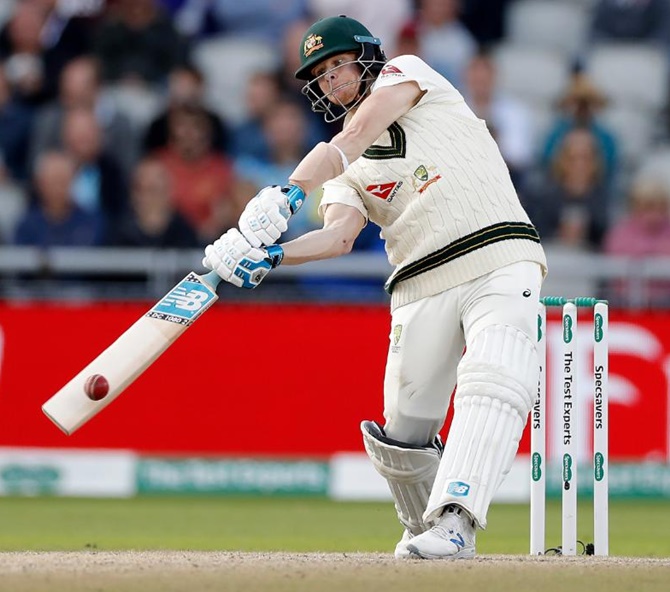 But, once again, first innings double centurion Smith took charge and England could find no way past him.

Wade made 34 in support and then skipper Paine added 23, while Smith made his way to his ninth straight Test half-century against England.

He was within sight of becoming the first batsman to score a double century and a ton in an Ashes encounter and only the eighth to do so in any Test match, but he mis-timed a big shot off spinner Jack Leach, which was pocketed by Ben Stokes in the deep, to depart for 82. 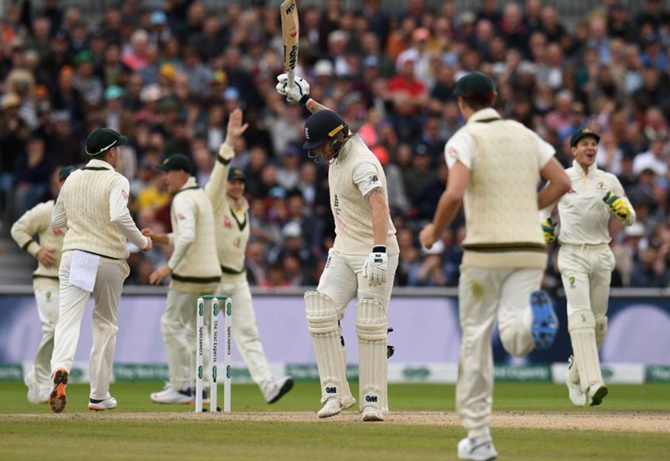 Earlier England narrowly avoided the follow-on after they were bowled out for 301, leaving Australia with an imposing lead.

England’s first innings crumbled thanks to a fine combined effort from Australia’s pace attack with Josh Hazlewood ending with four wickets and Mitchell Starc and Cummins picking up three each. 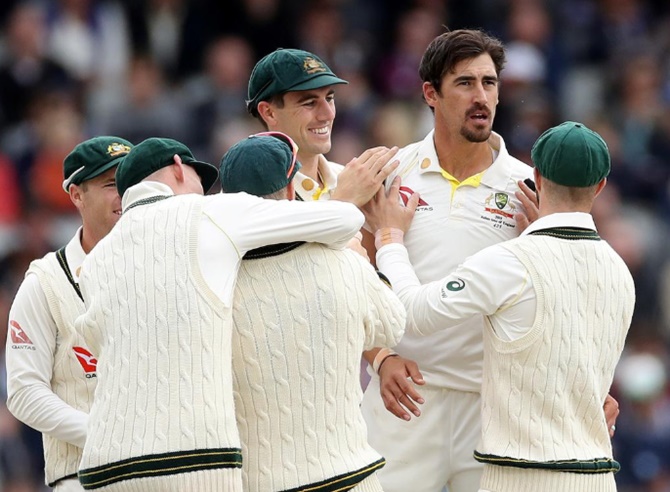 Left-arm seamer Starc amply justified his inclusion for this Test with the key breakthrough wickets after England resumed on 200 for five, removing Jonny Bairstow (17) and Ben Stokes (26).

Jos Buttler offered some resistance with his 41 as England just about avoided the humiliation of the follow-on before he was bowled by Cummins.