Images from Day 4 of the third Test Ashes Test, at Headingley, on Sunday. 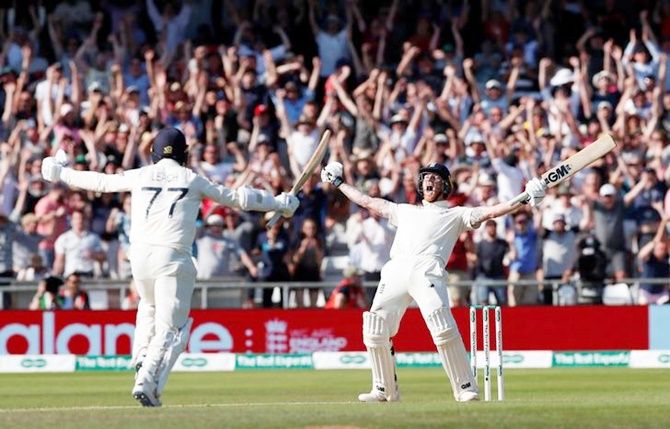 IMAGE: Ben Stokes celebrates after hitting the winning runs for England in the third Ashes Test against Australia, at Headlingley, on Sunday. Photograph: Andrew Boyers/Reuters

Ben Stokes scored a scintillating century in the third Test to fashion one of England's greatest Ashes comebacks against Australia, at Headingley, on Sunday, and level the series.

Chasing a mammoth 359 in the fourth innings, Stokes hit a flurry of boundaries during his knock of 135 not out in a remarkable last-wicket stand of 76 with Jack Leach, who scored just one run, to pull off a nail-biting one-wicket victory on the fourth day.

England’s hopes appeared to be over as they lost five wickets for 31 runs, and Leach was at the crease with 73 still required.

But Stokes put up a dogged fight and moved to his hundred with a superb display of power-hitting and innovation to enable the home side register perhaps the greatest chase in Ashes history. 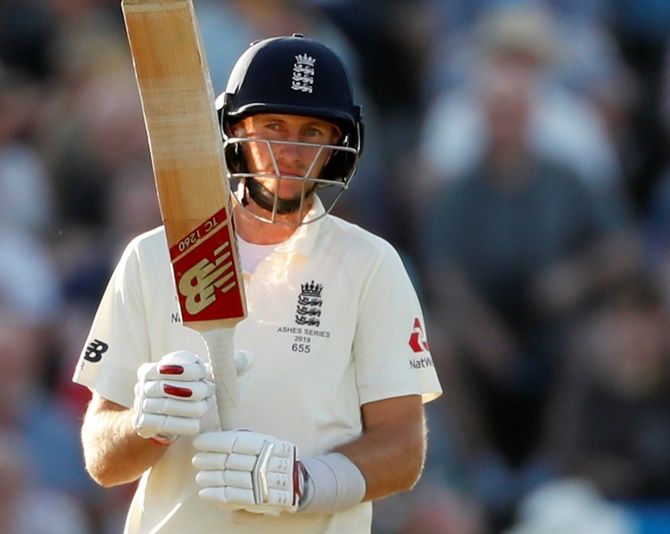 IMAGE: Joe Root was out for 77 attempting an aggressive shot. Photograph: Andrew Boyers/Reuters

England one-day World Cup hero knew everything depended on him with one wicket left and he smashed a remarkable eight sixes to all corners of the ground to get England within touching distance of their highest-ever second-innings total to win a Test match.

Coming into the day on 156-3 and needing another 203 runs to win the match and prevent Australia -- who lead the five-Test series 1-0 -- from retaining the Ashes, England lost captain Joe Root, out for 77 chasing an aggressive shot, in the sixth over of the day. 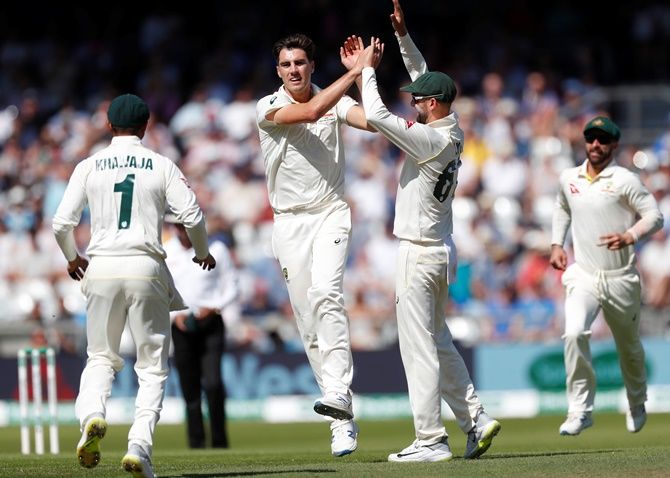 Nathan Lyon picked the perfect moment to move to third in the list of Australian leading Test-wicket takers, as England appeared to be on course for defeat, but Bairstow (34 not out) and Stokes (32 not out) steadied the ship.

The experienced pair accelerated the run rate with their vital unbeaten stand seeing England through to lunch and raising hopes of a second-highest-ever successful fourth-innings run chase at Headingley.