Australia put one hand on Ashes after England collapse Australia's pacemen crashed through England's top order with four wickets in a thrilling final hour on day two of the third Ashes Test on Monday to all but crush the tourists' hopes of keeping the series alive.

After Joe Root's bowlers rallied their team by dismissing Australia for 267, Mitchell Starc came within a whisker of a hat-trick and debutant Scott Boland grabbed another two wickets to leave England 31 for four at stumps, still trailing by 51 runs. Captain Root was 12 not out, with Ben Stokes on two, the pair left to mount an improbable rescue mission at the Melbourne Cricket Ground.

Even accounting for the fragility of England's top order the pace onslaught by Starc, Boland and Pat Cummins with the new ball was breathtaking. "What they did again for the last hour tonight was unbelievable," said opener Marcus Harris, who top-scored for Australia with 76.

"I can’t see (the pitch) getting a whole lot easier to bat on ... There’s enough there for the bowlers and if you’re willing to occupy the crease there’s runs there as well."

It was a dramatic end to a rollercoaster day which started with a COVID-19 scare in the England camp as two support staff and two family members tested positive and were forced to isolate.

England's players were cleared after rapid antigen tests and the match got back underway after a half-hour delay. However, the team face an anxious wait to see if they will be cleared after more thorough PCR tests on Monday night.

Whatever the results, England finished day two on life support after their batsmen again crumbled under pressure a day after being skittled for 185.

Starc had opener Zak Crawley caught behind for five and number three Dawid Malan lbw for a duck in successive balls.

The hat-trick ball whistled past the outside edge of Root's bat, drawing a gasp from the terraces.

Home bowler Boland then triggered pandemonium in the stands when he had the hapless Haseeb Hameed caught behind for seven and nightwatchman Jack Leach bowled for a duck in the same over.

It was a bitter pill to swallow for James Anderson and the other England bowlers, who had battled hard to drag their team back into the contest after Australia resumed on 66 for one in the morning. Even at 39 Anderson showed he has lost little of his brilliance, finishing with 4-33 after dismissing Steve Smith (16), Harris and Cummins (21) on day two after removing opener David Warner on day one.

"I thought firstly on the bowling front we did really well to stick at our task throughout the day," Anderson told reporters.

"We know that that last 12 overs was going to be tough with that new ball but even so, to lose four wickets was really disappointing."

Ollie Robinson and Mark Wood grabbed two wickets each, while recalled spinner Leach bounced back from his Gabba horror show with probing spells and was rewarded with the wicket of Cameron Green, trapped lbw for 17.

With holders Australia up 2-0 in the series and needing only to draw the match to retain the urn, Root needed his batsmen to hold on for that final hour.

But once again the skipper found himself strolling out to the middle after only a handful of overs, this time with England's Ashes hopes on the brink of ruin.

© Copyright 2022 Reuters Limited. All rights reserved. Republication or redistribution of Reuters content, including by framing or similar means, is expressly prohibited without the prior written consent of Reuters. Reuters shall not be liable for any errors or delays in the content, or for any actions taken in reliance thereon.
Related News: Australia, England, James Anderson, Mark Wood, Marnus Labuschagne
COMMENT
Print this article England's Bairstow on yet another batting collapse

Indigenous and Proud: Boland hopes to be role model 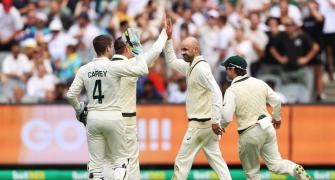