Chris Gayle marked his return to Test cricket with an imposing unbeaten 85 as he led West Indies to 145 without loss, chasing New Zealand's 351 all out on the second day of the first Test at North Sound, Antigua.

Gayle's characteristically confident performance, supported by fellow opener Kieran Powell (58 not out), came after the hosts spinner Sunil Narine picked up his first five-wicket haul as the tourists failed to build on a promising start with the bat.

West Indies trail by 206 runs with all their first innings wickets intact but Gayle looks ominously capable of amassing a major total in his first Test knock in 19 months.

The left-hander has played predominantly Twenty20 cricket during his exile, caused by a dispute with the West Indies Cricket Board, and he began in the style of the shortest format -- taking Chris Martin for four fours in his first over. 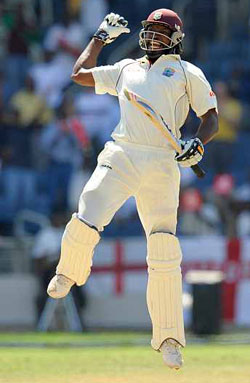 Gayle reached his half century in 39 balls but slowed down in the latter stages as he wisely put his mind to making sure he returned to the crease on Friday.

It was an entertaining display but again there were very few fans there to witness it at a poorly attended Sir Vivian Richards Stadium.

New Zealand will regret failing to take their chances, however, with Daniel Flynn dropping Gayle off Doug Bracewell when the Jamaican was on 36 and West Indies were 47-0.

Neil Wagner should also have removed Powell when he edged him through the slips but Martin Guptill failed to react.

The frustration with the ball came after a disappointing batting performance from Ross Taylor's men who had resumed on 232 for four.

Narine removed nightwatchman Wagner and then Kane Williamson and Dean Brownlie put their heads down to put on 40 for the sixth wicket before Williamson was bowled, playing on a short delivery from paceman Kemar Roach.

Brownlie followed shortly after, caught behind off Ravi Rampaul, and the score would have been even more disappointing had it not been for a 42-run last wicket partnership between Bracewell and Martin.

That late resistance ended when Bracewell holed out to Shivnarine Chanderpaul off Rampaul.

Any frustration from West Indies at failing to finish off New Zealand was tempered by the fact that at 223 for two on the opening day a much bigger score was within the tourists' grasp.

Narine's 5-132 in his first Test in the Caribbean, and just his second career Test, should end the discussion about whether his off-spin, highly effective in Twenty20, can translate to the five-day game.

"It felt good to get my first wicket and then go on to get five," Narine said. "You can relax a little bit more (in test cricket), you don't have someone going after you every ball".

© Copyright 2022 Reuters Limited. All rights reserved. Republication or redistribution of Reuters content, including by framing or similar means, is expressly prohibited without the prior written consent of Reuters. Reuters shall not be liable for any errors or delays in the content, or for any actions taken in reliance thereon.
Related News: Chris Gayle, Doug Bracewell, Sunil Narine, New Zealand, West Indies Cricket Board
COMMENT
Print this article