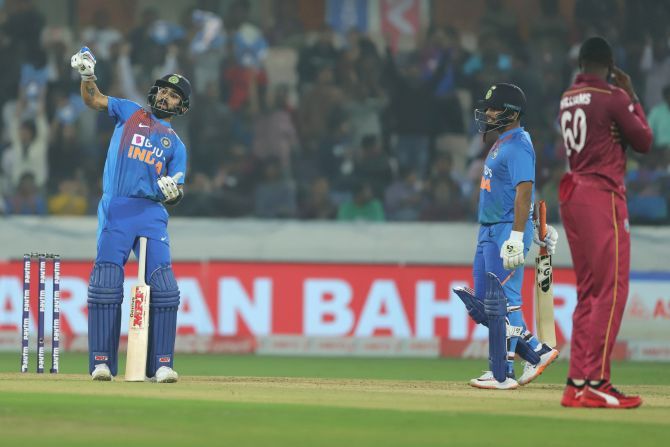 IMAGE: Virat Kohli teases Kesrick Williams during the first T20I match between India and the West Indies at the Rajiv Gandhi International Stadium in Hyderabad on Friday. Photograph: BCCI

Bachchan had warned everyone to not mess with Kohli as he always manages to make the opponent pay on the field. Using his dialogue from the cult movie Amar Akbar Anthony, he came up with an analogy to describe Kohli's attitude.

After reading Bachchan Sr’s tweet, Kohli thanked the Bollywood star and called him an inspiration.

In the 16th over of India's innings, Kohli was seen imitating Williams. The first ball of the over was dispatched for a boundary. The next ball was then flicked for a six on the leg side.

It was then that Kohli brought out the notebook celebration and Williams looked on in amusement.

In 2017, Williams had given Kohli a 'notebook-style' goodbye after taking his wicket and Kohli clearly remembered it.

This innings of 94 by Kohli enabled India to chase down the target of 208 with eight balls to spare.

India and West Indies will next lock horns in the second T20I on Sunday, December 8.