The Indian team has moved beyond Virat Kohli - The Leader, it will now only be about Virat Kohli- The Batter. 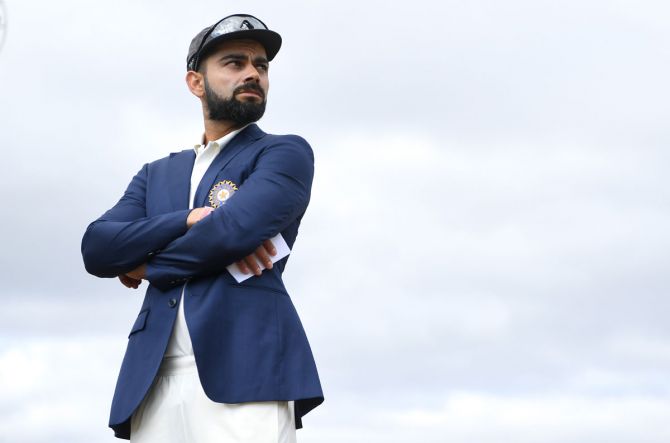 IMAGE: His relations with the BCCI having reached its lowest ebb, it can be safely concluded that Virat Kohli has 'retired hurt'. Photograph: Gareth Copley/Getty Images

Virat Kohli wasn't pushed but he decided to jump.

It was a twitter message on September 16 when he informed the world about his decision to quit T20 captaincy, keen to focus all his energies on Test cricket and ODI format keeping the 2023 World Cup in mind.

Exactly, one day short of four months, the 33-year-old has now joined the list of former India captains, having announced his decision of stepping down for the second time, this time from Test cricket

In between, he was sacked as ODI skipper, much to his dismay and from there started his "Journey to the Centre of Earth" from the "Top of the World", where he spent at least six and half year of his seven-year captaincy tenure.

Rohit Sharma was the designated Test vice-captain for the tour of South Africa and there won't be any change to that hierarchy that BCCI has set in place. By natural progression, if all goes well and he is fit, Rohit Sharma will be leading India in Test match cricket with KL Rahul being his deputy.

The home series against Sri Lanka will be first assignment for Rohit.

However, with two World Cups in two years and so much of cricket, Rahul could be seen leading the team from time to time as and when Rohit takes a break as a part of workload management.

His relations with the BCCI having reached its lowest ebb, it can be safely concluded that Kohli has "retired hurt", the decision only accentuated by a shock defeat against the weakest South African Test side in recent times.

If BCCI sources are to be believed, there has been no prior discussions with any of the top brass as he had burnt his bridges in the pre-departure press conference that became his undoing.

It was his and his decision alone. The establishment for once had no inclination to stop him from stepping down. However, before putting out a formal statement, he had informed the BCCI biggies that he is tired.

Rahul Dravid is creating a succession plan and the roadmap ahead. The Indian team has moved beyond Virat Kohli - The Leader, it will now only be about Virat Kohli- The Batter.

So it wasn't surprising at all when BCCI secretary Jay Shah congratulated Kohli on his decision, which was in one way, an immediate acceptance of his resignation.

"Congratulations to imVkohli on a tremendous tenure as TeamIndia captain. Virat turned the team into a ruthless fit unit that performed admirably both in India and away. The Test wins in Australia & England have been special," Shah tweeted.

The series defeat and lack of runs have also pushed him to a corner and with all his support system in and outside the team gone, one of the world's finest batters had lost the zeal.

But how did it happen? Here's the back story.

When Kohli had decided to quit T20 captaincy, just prior to that, he had a meeting with BCCI president Sourav Ganguly, secretary Jay Shah, five selectors. Even Rohit Sharma was present in that meeting.

Kohli referred to this very meeting where he had expressed his desire to quit T20 captaincy and which he said was accepted well by everyone.

And this is the same meeting which Ganguly had referred to when he said that he had requested Kohli to stay back as captain.

In between what no one spoke about was how Kohli had come with a proposal of having KL Rahul as his deputy in ODIs while Rohit remained captain in only T20 format.

That proposal was immediately shot down as it would have meant Rohit would have missed the ODI captaincy despite being a deserving candidate for the job.

In this back-drop, Kohli had miscalculated one aspect. He never expected that the BCCI would sack him from ODI captaincy on the pretext of "too much leadership".

Someone who has played all his cricket under Mahendra Singh Dhoni, a man who has lived and left on his own terms, Kohli found the sacking difficult to digest.

Not known to pull his punches, he made a calculated insinuation at BCCI president Ganguly, accusing the former stalwart of lying (without naming) that the former skipper had asked to him stay back as T20 captain till the World Cup. That was his first brush with the establishment.

Having ended with a bloody nose, BCCI waited and then unleashed its chairman of selectors Chetan Sharma to defend the establishment.

The former pacer on his part completely contradicted Kohli, making it a case of "your word versus mine".

Kohli wasn't a fool not to read the writing on the wall when he would have learnt that BCCI has thrown a counter-punch on the 31st night when the team was celebrating their win in the first Test in South Africa.

He knew that he needed to win the Test series in order to hold his ground.

Ask any of his teammates, Virat Kohli the batter has the highest respect for his heady achievements and the manic consistency but there was a point between 2017-19 when Committee of Administrators was in power and the Indian skipper with coach Ravi Shastri by his side had the carte blanche as far as his team building was concerned.

Yes, there were whsipers of "lack of communication," players at times "didn't feel secure enough" and those who were struggling for form weren't given "an arm of assurance".

Somehow, the batter Kohli earned a lot of respect but leader Kohli stood in a 'Lonely Planet' and unlike an Imran Khan, who had complete devotion from his team, Kohli perhaps found himself in a tight corner.

When Jasprit Bumrah on the second day's end was asked how much has been captain Virat Kohli's hand in his development, the pacer had replied: "A bowler's development also depends on his own hard work".

A simple line but said a lot.

Kohli won't be seen in a press meet for the Indian team in near future. That's a certainty. He looked jaded, tired and spent on Friday when he came for the media interaction.

The answer to a very valid and pointed question on losing focus due to unnecessary stump-mic chatter was a more a gibberish one where he only knew what he was trying to explain.

In his farewell note, there wasn't any thank you note for Rahul Dravid, which he had reserved for Ravi Shastri. Perhaps, he hadn't struck that chord yet.

All captains have a shelf life and better placed are those who judge earlier that it's time to leave. Kohli judged it but only after damage was done.