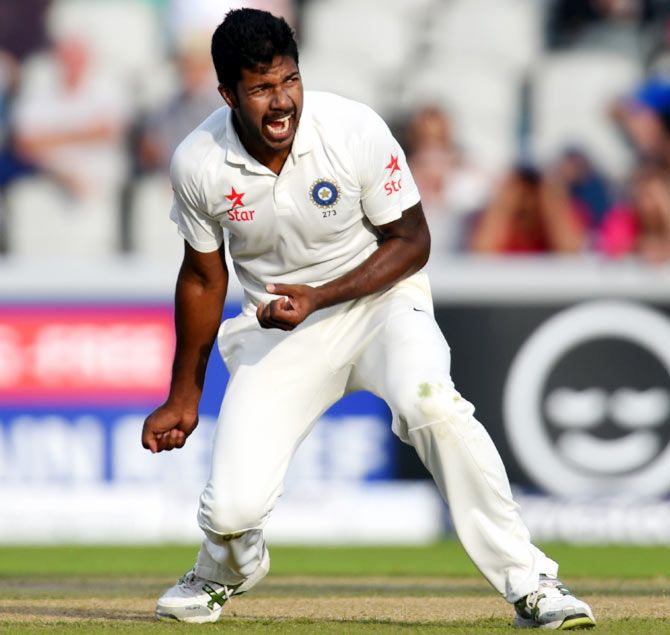 India's fast bowlers, led by Varun Aaron, made full use of seamer-friendly conditions, to dismiss an inexperienced Cricket Australia XI for 219 on Day 1 of their opening two-day warm-up match in Adelaide, on Monday.

All the Indian bowlers were among wickets as Aaron, who worked up good pace, finished with impressive figures of three for 72 in 17 overs.

Aaron thus kept himself in contention for a place in the playing eleven for the opening Test at Brisbane, starting December 4, while Bhuvneshwar Kumar (2/32 in 12 overs) and Mohammed Shami (2/52 in 18 overs) also got precious overs under their belt.

At stumps, India were 55 for one, losing opener Shikhar Dhawan for 10.

Murali Vijay (32 not out) and Cheteshwar Pujara (13 not out) were at the crease at close.

Another highlight of the day was wicketkeeper Wriddhiman Saha's fine performance behind the stumps. He took five catches and also effected a stumping to start his preparations for the first Test in right earnest.

At the onset, it was Cricket Australia XI captain Ashton Turner, who won the toss and elected to bat on a fresh track at the Gilderol Stadium.

He was involved in a 51-run partnership with opener Ryan Carters (58) before Aaron, in a quick burst, removed Turner (29) and new batsman Nick Stevens (0) in the space of three deliveries.

It brought Kelvin Smith (40) to the crease; he put on 74 runs for the fourth wicket with Carters on either side of the lunch interval.

It was the best stand of the innings for the hosts.

Once the two batsmen were dismissed within three overs after the lunch break, the Indian bowlers didn't let up the pressure and knocked over the remaining wickets cheaply.

Only the last wicket stand pair of Harry Nielsen (43 not out) and Harry Conway (7), showed some resistance, as the duo put on 52 runs to take the team's total past the 200-run mark.

On a pitch that assisted fast bowlers, Aaron rattled up the young batting order with sheer pace.

Leg-spinner Karn Sharma (2-30) was introduced into the attack ahead of Ravichandran Ashwin (1-22), but he couldn't find his bearings in the morning session.

However, he made a good comeback against the lower middle order batsmen, picking up two wickets in his first outing in Australia.

Ashwin had earlier dropped a catch at first slip off Aaron, to give Smith a lifeline.

This match is stipulated as a 13-per-side game, with 11 players eligible to bat and 11 can field. This is not an official first-class game.

India opted to rest Ravindra Jadeja, Ishant Sharma, Umesh Yadav, Naman Ojha and KL Rahul from this match with all other members of the touring party involved in the proceedings.

This is the first of two practice games against Cricket Australia XI scheduled this week before the commencement of the four-match Test series. 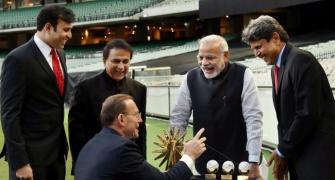 When Laxman was bowled at MCG by Modi's speech 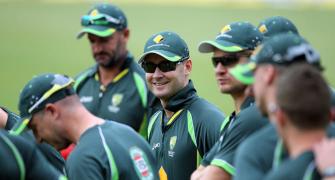 Aus not as good as it used to be, India have a chance to win: Azhar 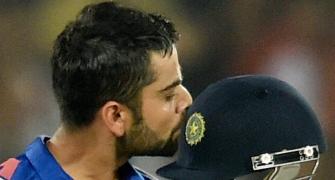 ODI Rankings: Kohli at No 2, Bhuvneshwar moves up to 7th 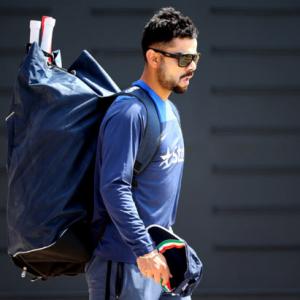 Team mates will determine success of my captaincy: Kohli 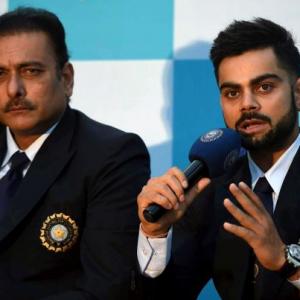 Priority in Australia is to be positive and aggressive: Kohli