Ravichandran Ashwin and Wriddhiman Saha stitched an unbeaten 108-run partnership for the sixth wicket to rescue India from a precarious start as the visitors’ posted 234 for five when stumps were drawn on day 1 of the third Test at St Lucia.

Ashwin will resume the second day on 75 and will be eyeing his second century of the series. His partner Saha will begin his innings on 46.

Statistical highlights on Day 1 of the third Test between India and the West Indies in St Lucia on Tuesday. 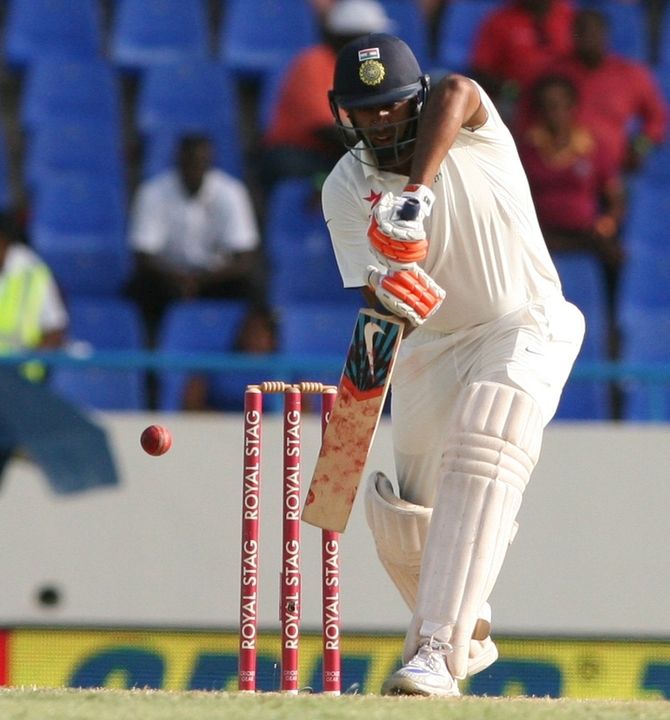 # Wriddhiman Saha, for the first time, has posted three consecutive innings of 40-plus in Tests - all against West Indies - 40 at North Sound, 47 at Kingston and 46 not out at Gros Islet.

# Saha has been involved in three stands of 50-plus for the sixth wicket in this series in as many innings – the sequence being 108 (unbroken) with Ashwin in the present Test, 98 with Rahane at Kingston and 71 with Ashwin at North Sound. IMAGE: West Indies pacer Alzarri Joseph celebrates a wicket with his team-mates during the first day of the third Test against India at the Daren Sammy Cricket Ground, St Lucia. Photograph: WICB Media.

# Alzarri Joseph, at 19 years 263 days, became the second youngest West Indian bowler to open the bowling in Tests – the youngest being Jerome Taylor, who opened at 19 years 5 days, in the first innings against Sri Lanka at Sabina Park, Kingston in June 2003.

# Ravichandran Ashwin's unbeaten 75 not out off 190 balls is his first fifty vs West Indies - his seventh in Tests.

# In matches batting first, Ashwin has scored three consecutive fifties - his sequence being 56 vs South Africa at Delhi in December 2015; 113 at North Sound in July 2016 and 75 not out at Gros Islet in August - both vs West Indies.

# Ashwin's superb average of 66.57 is the highest amongst the Indian batsmen with atleast five innings against the West Indies - his aggregate being 466 in nine innings, including three hundreds. The next best average is by Sunil Gavaskar - his tally being 2749 (ave.65.45) in 48 innings, including 13 hundreds.

# With two five-wicket instances apart from two fifty-plus knocks, including a century, in this series, Ashwin has become the third Indian all-rounder to achieve the said distinction in a Test series. Kapil Dev had accomplished the feat twice in the six-Test series - vs Pakistan in 1979-80 and vs England in 1981-82. Bhuvneshwar Kumar had registered the double in the five-Test series vs England in England in 2014.

# Kohli has batted at this batting position for the first time in an away Test.

# Shikhar Dhawan (1), Kohli (3) and Rohit Sharma (9) have provided the second occasion of three out of the top five Indian batsmen getting out in single-digit scores vs West Indies since 2000.

# Lokesh Rahul, for the first time, has recorded a hundred and a fifty in consecutive Test innings. In the Kingston Test, he had registered 158, followed by a fifty in the present Test.

# Rahul, having registered three hundreds in Tests, could not convert his fifty into a century for the first time. # For the first time in a Test innings vs West Indies, Rohit Sharma has been dismissed without scoring a century. In his first two Test outings in November 2013 vs West Indies, he had recorded 177 at Kolkata and 111 not out at Mumbai. Since recording the above two centuries in his first two Test innings, Rohit has been a mediocre performer in Tests, totalling 617 in 28 innings at an average of 22.85, including four fifties.

# The unbroken 108-run stand is India's highest for the sixth-wicket vs West Indies at Gros Islet and their third best in the West Indies - the highest being 137 between Dilip Sardesai and Eknath Solkar at Kingston in February 1971.

# India's number three batsmen have been averaging 28.16 away from home since 2012 - the lowest among the Test nations. During this period, they have amassed 1183 runs in 42 innings, including two hundreds and four fifties. 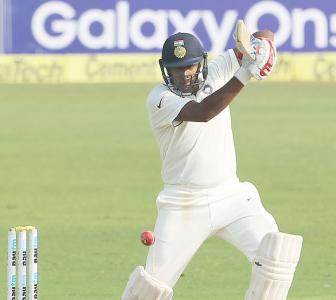 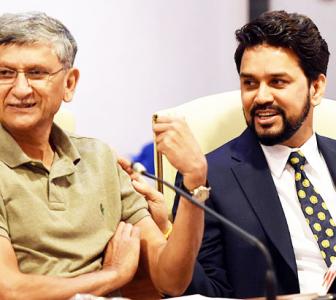 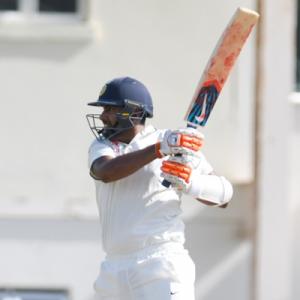