IMAGE: Wriddhiman Saha might start as the wicketkeeper ahead of Rishabh Pant for the series opener beginning on Friday. Photograph: BCCI/Twitter

India captain Virat Kohli, on Wednesday, dropped enough hints to indicate that seniormost pacer Ishant Sharma and young opener Prithvi Shaw will be in the playing XI for the first Test against New Zealand in Wellington.

If India's net session on Wednesday is taken into consideration, Wriddhiman Saha is starting as the wicketkeeper ahead of Rishabh Pant for the series opener beginning on Friday.

Hanuma Vihari, team's designated No 6 batsman for away Tests, will be the fifth bowling option with Jasprit Bumrah, Mohammed Shami and Ishant being three specialist pacers.

Ravichandran Ashwin is in the mix for the lone specialist spinner's spot though Ravindra Jadeja's all-round skills can't be ignored either.

Ishant, who was out for three weeks with ankle injury sustained during the Ranji Trophy game, bowled full tilt at the nets and even earned appreciation for troubling batsmen with his pace and bounce.

"He (Ishant) looked pretty normal and pretty similar to what he was bowling before the ankle injury. He is hitting good areas again and he has played (Test cricket) in New Zealand couple of times, so his experience will be useful to us. It was really good to see him bowling with pace and in good areas," Kohli said during his media interaction.

The skipper also said in as many words that the team wouldn't like to change Shaw's natural stroke-play which was a good enough hint that Shubman Gill will have to warm the benches for now.

"Prithvi is a talented player and he has his own game and we want him to follow his instincts and play the way he does. Look, these guys have no baggage and are not desperate to perform in any manner," the skipper said. 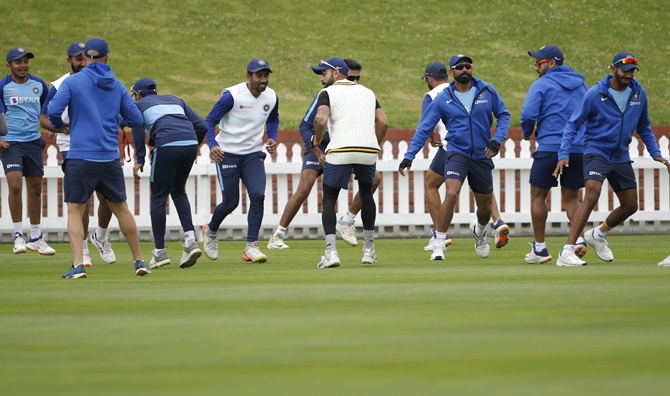 The skipper wants Shaw to take a leaf out of Mayank Agarwal's performance in Australia back in 2018-19 when he hit back to back half-centuries in Melbourne and Sydney.

"They don't have any nerves to do well overseas. Like a clear head with which Mayank played in Australia, Prithvi can do the same in New Zealand.

"A bunch of guys playing with fearlessness, something that can motivate the whole team, gives us start that the team wants and not get intimidated by the opposition in any way."

The skipper downplayed India's below-par show in the three-match ODI series, especially that of Agarwal.

"Prithvi, I think you can call him relatively inexperienced and Mayank, I wouldn't call him that inexperienced because he has scored a lot of runs last year. So he understands what his game is like in Test cricket."

"I think sometimes in white ball cricket we try to do too much but once you come into red ball cricket, you fall into that disciplined mode of batting, which obviously suits him much more at this stage." 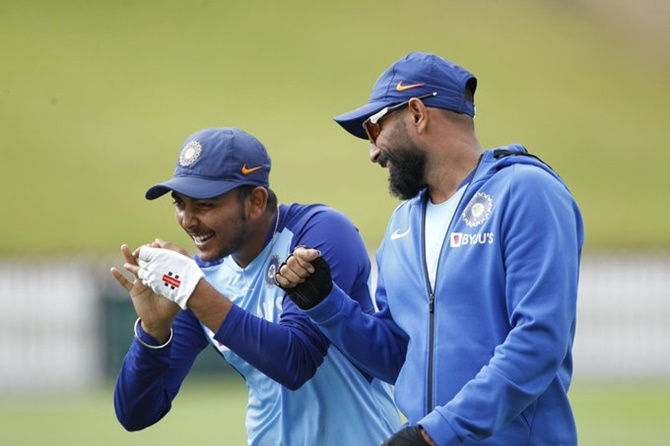 IMAGE: Virat Kohli wants to stick to his team's strengths which is play with one spinner in the four-pronged bowling attack. Photograph: BCCI/Twitter

While he didn't give an answer on the Saha-Pant debate, the burly Delhi keeper had precious little to do at the main nets and was seen spending more time doing his keeping drills and only got an opportunity to bat when the first team completed its routines.

New Zealand are likely to go with an all-pace attack but the Indian captain wants to stick to his team's strengths which is play with one spinner in the four-pronged bowling attack.

"If it had been a Johannesburg pitch, I could have said it's a possibility (to play four pacers) but our team has that skill that we can bowl out other teams with only three fast bowlers," he sounded confident.

"But you need one world class skillful spinner, who can take wickets on any pitch. We won't copy the home team. We would rather figure out what is the most lethal combination, which gives us balance," he added.

"As a bowling group it's better than the one that came to NZ last time and that is why we have got so many teams all out in last two and half years. We would like to repeat that here also," Kohli added.