'I was focused on my game whether the opportunity comes or not, I just looked to give my best every time I went out to play.' 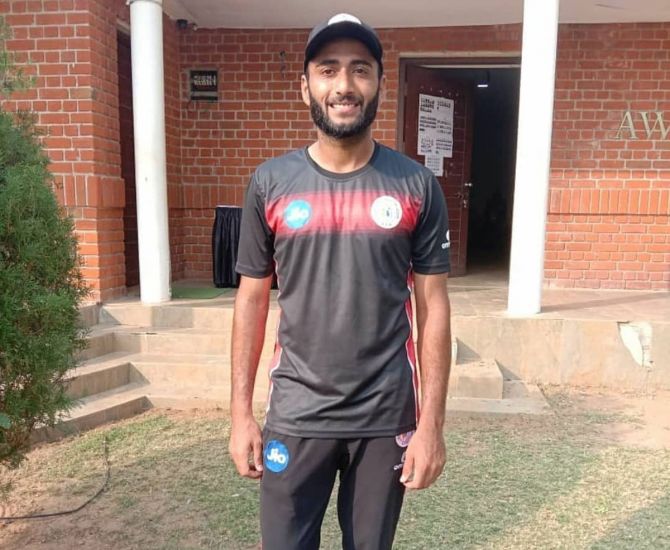 Arzan Nagwaswalla is definitely the most surprise pick in the Indian Test team.

Arzan was included as a standby player for the World Test Championship final against New Zealand and the five-Test series in England.

Former women's captain Diana Edulji was the last Parsi player in the Indian team, with her last international appearance coming in an ODI in 1993.

Not being part of the IPL Arzan could not garner much attention. But the Gujarat fast bowler caught the selectors' eye not only with his pace but also with his ability to pick wickets, having finished with 41 wickets last season with three five-wicket hauls and one ten-wicket haul.

Arzan, who hails from the village of Nargal, close to the Maharashtra border -- recalls how he had to travel around 350 km for his training in Ahmedabad in the initial days. In the village too, pursuing cricket was not easy as the players themselves had to roll the pitch and plan the practice sessions themselves.

It is no surprise that his role model is Pakistan's pace bowling legend Wasim Akram.

After being named as the standby player in the Indian Test squad, Arzan Nagwaswalla spoke to Rediff.com's Harish Kotian on his journey in cricket so far.

Did you expect this call up?

Frankly speaking, I didn't expect it so early. Obviously, you do expect to be picked in the Indian team, but...

When did you know of the selection?

Actually, the secretary of the Gujarat Cricket Association had called me in the morning itself that 'You might have to go to England so just be ready.'

That time I didn't understand what he was talking about. So when I heard about the selection now, I understood what he was saying.

How did your family react?

I haven't reached home yet. I am travelling and on my way home.

Are you excited to get to practice and hopefully play in England which has the best conditions for fast bowlers?

This is the first time I am travelling there so there is a lot of excitement. It feels like a dream come true to get a chance to travel with the Indian team.

You had a good season in domestic cricket last year, picking up 41 wickets in the 2019-2020 Ranji Trophy season with three five-wicket hauls and one ten-wicket haul.
Tell us the improvements you made as a bowler in your second season.

There was not much of a difference in the last season. I was just focusing on the process whether it be bowling or in practice and the results are there for everyone to see.

What were the changes if you can point out in the second season that brought you success?

It was more of a mental aspect I would say in terms of how to approach a game, how to play and similar things.

So it was more of the mental side of things and other than that there were no any changes.

You played under Parthiv Patel who has a lot of experience and has taken Gujarat cricket to greater heights in the last few seasons. What was his advice to you?

He used to constantly tell me that 'You are doing well so be ready as opportunity can come anytime.'

I was also focused on my game whether the opportunity comes or not, I just looked to give my best every time I went out to play. 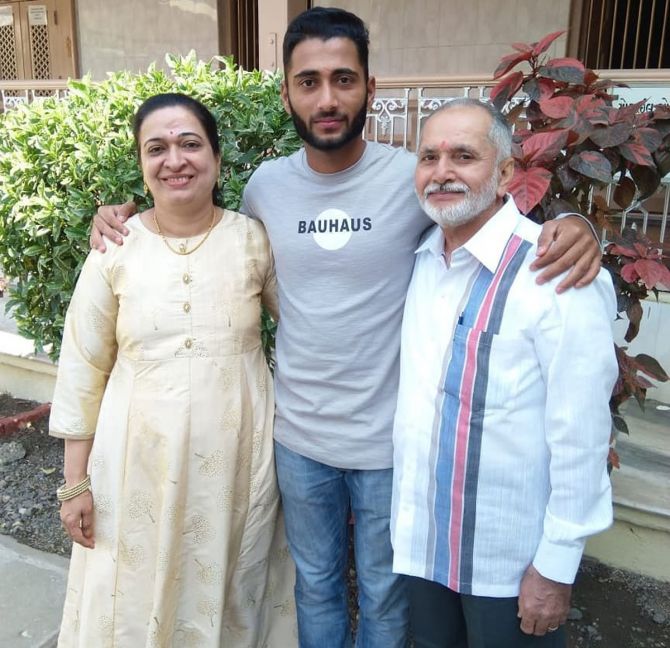 Did it also help a young player when you play in a successful team like Gujarat?

It was about the team environment, the bonding between the players. There was no biasness in the team, whether it was a senior player or junior player, everyone played together as one unit.

I think that is the main reason behind our success.

Our coach used to tell us that we should work as a team and focus more on the team goals rather than individual goals.

Who is your childhood coach?

My childhood coach is Kiran Tandel, who is a former player for Gujarat. He hails from my village Nargal (close to the Maharashtra border). In fact, he lives next to my house and he is also a fast bowler. So I learnt a lot of things from him.

Were things difficult for you at the start because you hail from a small village?

I used to training in my village in Nargal when I started off, but for the camp I had to travel to Ahmedabad which is 350 km away.

The travelling was a bit of struggle, but that was fine as it helped me improve.

In Nargal village, we used to prepare the pitch and even today we work on the pitch and practice ourselves, we have to do everything.

The training in Ahmedabad helped me work with good coaches and they helped rectify the errors in my bowling and that played a big part in my development.

Along with getting picked for India, playing in the IPL is the next big target for all Indian domestic players. You did well in the Mushtaq Ali Trophy T20 tournament with nine wickets from five games but were not picked in the IPL even though were part of it as the nets bowlers for the Mumbai Indians. Were you disappointed?

No, it was not disappointed. I knew there is a time for everything, so when the time is right, I will also get there.

In the last one year, there was not much of domestic cricket. How did you stay in touch with the game?

We had a few camps in Ahmedabad so there we got a chance to practice and improve our skills. The physical training part, we were doing at home and the cricketing part we practiced in Ahmedabad.