'I thank Sachinpaaji for taking me to Coach Gary Kirsten and telling him that 'Sreesanth should play' and thanks to Dhonibhai for giving me that opportunity.' 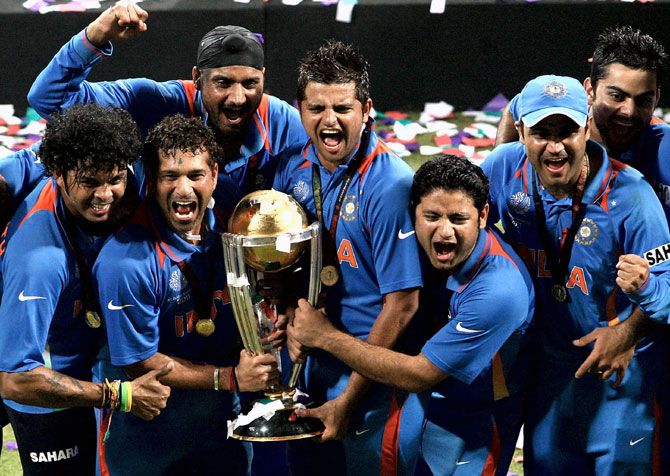 Not many possessed the ability with the ball that Shanthakumaran Sreesanth did in his hey day and no wonder he formed an integral part of the Indian team from 2006 to 2011.

Sreesanth, renowned for swinging the ball at a good pace, unfortunately could not realise his full potential after he was banned by the BCCI for his alleged role in the IPL spot-fixing scandal in 2013, a seven year ban which ends in August.

Sreesanth, who made his India debut in 2005, was part of the T20 World Cup winning team in 2007 under Mahendra Singh Dhoni.

Sreesanth, in fact, caught Misbah-ul Haq when the Pakistani batsman was threatening to win the match for his country and give India the first-ever T20 World Cup title.

Four years later, in 2011, Sreesanth was part of the Indian team which won the ODI World Cup.

He was also part of the Indian side which became the World No 1 team in Test cricket for the first time in Indian cricket history.

Sreesanth tells Harish Kotian/Rediff.com what it meant to be part of the World Cup-winning teams in 2007 and 2011. The third segment of a four-part fascinating interview:

You were part of two World Cup-winning teams in 2007 and 2011. How much did those two triumphs mean for you?

Those two World Cup wins means a lot to me, especially the 2007 World T20 victory.

I was dropped from the England ODI series in 2007 and I had to come back home. But I was picked for the World T20 and it was a completely new team with Mahendra Singh Dhoni as the captain.

He had this belief despite us missing the big three in Sachin Tendulkar, Sourav Ganguly and Rahul Dravid and also our senior bowler Zaheer Khan.

Luckily, we had the experienced Ajit Agarkar. A lot of people underestimated Ajitbhai and a lot of people have now forgotten his contributions.

in 2007 he really helped me a lot during those matches. I was a huge fan of Ajit Agarkar and I am still a huge fan. He was the fastest to 50 wickets in ODIs when I was in school.

In South Africa, even though he was not in the team, he always used to support the team. He used to come and tell me what to do and how to bowl, so he made a big contribution.

The 2007 win was huge for me because it brought cricket back to India (after the disappointment of the 2007 ODI World Cup when India ws knocked out of the first round).

And because of that World Cup win, the IPL happened, and you know how it completely changed the face of cricket.

I really thank Dhonibhai for giving me an opportunity and also our coaches Lalchand Rajput Sir, Venkybhai (Venkatesh Prasad) and Robinbhai (Singh).

As a young team we went there and we won the tournament. Nobody expected us to win.

The 2011 World Cup win was very big for us because of Sachinpaaji (Tendulkar).

That was the only feather missing in his cap and we were lucky to win it for him.

I was called up to replace the injured Praveen Kumar after passing the fitness test.

I thank the team for accepting me and giving me the new ball in the first match itself. Dhonibhai gave me the first over in the practice match against Australia where I got Shane Watson's wicket, I was bowling really fast. The Bangladesh match didn't go to plan, but I was part of the team.

April 2, 2011 was the day and I thank Sachinpaaji for taking me to Coach Gary Kirsten and telling him that 'Sreesanth should play' (in the World Cup final against Sri Lanka) and thanks to Dhonibhai for giving me that opportunity.

I remember Bhajjipa calling me the night before the final and saying 'Shantha, tu khel raha hai kal, so jaa abhi' (you are playing in the final tomorrow, so better sleep now).

Thanks to everybody, I got the opportunity to bowl with the new ball with Zaheer Khan, which I couldn't do in 2007.

It was a big thing for me because he was my senior at the MRF Pace Foundation. We used to look up to him then.

I enjoyed bowling with him, he has tremendous knowledge about fast bowling.

He is one of the greatest reverse swing bowlers. Yes, you had Wasim Akram, who was superb with reverse swing, but when it comes to sub-continental conditions, Zaheerbhai was just brilliant. I learnt a lot by just observing him and talking to him.

There was too much pressure on me in the final because I didn't play in a few games before that, but I enjoyed the match.

I told myself I should not give up and I should run in and just bowl fast.

A lot of people don't know that I was suffering from heat stroke that day of the final. Dhonibhai, Zaheerbhai, Yuvraj everyone came up to me and egged me on.

Sachinpaaji came up to me and supported me. 'Sree, come on please bowl man, come man you can win this for us,' he said.

Winning that World Cup was very emotional for everyone in the Indian team.

I was fortunate to be part of two historic wins in the history of Indian cricket.

When India became the World No 1 in Tests for the first time ever (in 2009) I was lucky to be part of that team also.

I can probably say that I am one fast bowler who was part of the Indian team which was the best team in the world across all the three formats.

You played in an era when India had one of the best batting line-ups in its history -- Virender Sehwag, Sachin Tendulkar, Rahul Dravid, Sourav Ganguly, V V S Laxman. Bowling to them in the nets must have been an learning in itself. Tell us about that experience.

I always say that the only way this Malayali cricketer from Kerala improved his bowling was by bowling to these great batsmen in the nets.

I used to plan the night before on how to bowl to Sachinpaaji, Rahulbhai, Laxmanbhai, Virubhai, Yuvraj, Gautam Gambhir, who was really under-rated but who performed when it really mattered.

Even later on, you had batsmen like Robin Uthappa and Rohit Sharma who were also difficult to bowl to.

And even Irfan Pathan had a good flow with the bat. He could hit it a long way and, of course, who can forget Dhonibhai?

And you had someone like Bhajjipa who scored two hundreds against New Zealand.

I was lucky to have been part of the team in those two Tests.

Most of them batted really well and it was really challenging for me to even get one wicket in the nets session.

I thank God I was born in this era and played alongside some of the great cricketers.