'Whatever happened regarding the captaincy, it wasn’t in my hands and that thing was completely uncontrollable.'

'I always think about the team, the team always comes first for me. If the team thought that it was the best decision during that period I respect that.'

Ajinkya Rahane on what went wrong during his captaincy stint at Rajasthan Royals. 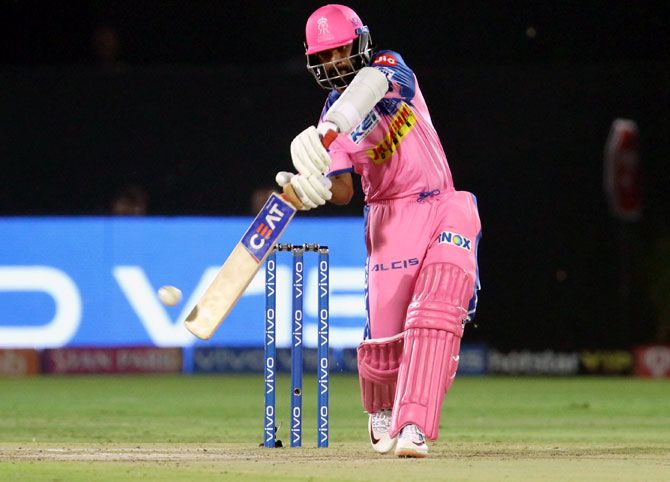 Ajinkya Rahane has had a tough few months.

After being overlooked for the 2019 World Cup, Rahane was dropped as Rajasthan Royals captain mid-way into the IPL following a string of low scores and the team’s poor showing in the first few games.

But he bounced back strongly with a century against Delhi Capitals and then followed it up with a couple of good knocks but the Royals suffered a disappointing campaign nevertheless, failing to qualify for the play-offs.

The 30-year-old Mumbai batsman wants to put the World Cup setback behind and believes he will get more opportunities in the future in the limited overs format.

"What I know is that I did really well in ODIs, whatever opportunities I got and whichever position I have batted in," he says.

Interestingly, Rahane batted at No 4 in the 2015 World Cup where he played a good innings of 79 against South Africa. His last appearance in the ODI team was in the series in South Africa in Feburary 2018, after which he was never considered again.

Rahane will soon leave for the United Kingdom to make his debut in English county to play for Hampshire where he hopes to work on his batting.

Rediff.com’s Harish Kotian spoke to Rahane on the sidelines of the CEAT International Cricket Awards 2019 in Mumbai on how he copped with being dropped as the captain of Rajasthan Royals and how India’s No 4 should bat in the World Cup.

You started off strongly in IPL with a couple of good knocks, including 70 in the second game vs SRH, but after that you went through a phase when you didn't score enough. What do you think went wrong?

Yes, as a team we could have done much better in IPL but personally I thought I batted really well.

The intent that I showed throughout the IPL was really good. I always look for improvement as a batsman.

Does captaincy get tough when the team is not doing well, especially in a franchise-based tournament like IPL?

It is a challenging role as a captain when you are leading a franchise and you got to accept it. As an elite sportsperson there are challenges you have to deal with and I thought I dealt with those challenges pretty well, I handled those situations really well.

What is important is backing your team-mates, backing those guys who are not doing well because it is all about the team, you should know how to get better performances from your team-mates.

I thought as a captain I did very well. I handled all the situations, all the challenging situations on and off the field really well.

Was it disappointing when asked to step down from the captaincy at Rajasthan Royals?

What I always think is the controllables, I don’t run behind anything. What is important for me is to play cricket passionately and do my batting passionately.

Whatever happened regarding the captaincy, it wasn’t in my hands and that thing was completely uncontrollable.

I always think about the team, the team always comes first for me. If the team thought that it was the best decision during that period, I respect that. But I certainly know that no one can take cricket out of me and no one can take batting out of me. I always play cricket passionately and that is my love.

I will always give my best no matter whatever team I play for, whether it is a franchise or any other team.

After you were relieved of the IPL captaincy, you got back among the runs. So, not having that extra pressure of leading the team helped?

It is not about that. It is all about how you can take all the things positively because for me, I was always positive and my attitude was good and that was the result when I got that century against Delhi Capitals.

I don’t think it was because of not having the captaincy.

You batted at No 4 in the World Cup in 2015 and did reasonably well with a couple of important knocks. What is the key to succeeding at No 4, especially in an important tournament like World Cup?

It is all about mindset, you need to have a good mindset, positive intent all the time and you need to read the situation too. Going by your experience, how would you say the No 4 batsman approach his innings in conditions like in England?

The No 4 batsman sometimes will go in with the team at 20/2, sometimes it will be 150/2, that's why it is all about reading the situation.

You were dropped from the Indian ODI team despite playing a couple of good knocks in South Africa at No 4. The team had also done well, winning the series 5-1. But you never got a chance after that. Did you feel it was unfair how it all panned out?

I don’t believe in staying in the past. What I know is that I did really well in ODIs, whatever opportunities I got and whichever position I have batted in.

If you see my record in the last couple of years, I have done well in one-dayers but I would rather focus on the present and look to focus on what I can control.

If my attitude is good, then opportunities will come and it is all about having that self-belief and being positive all the time.

This year you will be making your debut in English county cricket,as the first India player to represent Hampshire. What are you looking for exactly from the county stint?

I was thinking about playing county cricket for some time. It will be a new experience and playing in England will be a challenge against the Dukes ball in those conditions.

The weather changes quite regularly in England, every 15-30 minutes some times, so you are never really set as a batsman. I just wanted to experience that, I wanted to go there and learn many things as a batsman and as a cricketer overall.

And when you go as an overseas player, there is more responsibility on you, the team has expectations of you.

We learn from whatever matches we play, from the practice sessions we do.

I spoke to Rahul Dravid, Sachin paaji (Tendulkar) and they said it will be a completely different experience and you will learn so many things.

You have not scored a Test century for nearly two years now (his last century came against Sri Lanka in Colombo in August 2017). Is that something that you will be looking to work on during your county stint, trying to spend time in the middle and play big knocks?

As a batsman what you can do is just go there and play with a good mindset and good attitude, and that is very important.

At the back of your mind you are always thinking about scoring runs, sometimes when you think too much you get pressurised, you get bogged down. I don’t want to get bogged down but just play my natural game.

I just want to back myself and back my game, then I am sure runs will come.

Someone like Virat Kohli has been very successful across all three formats. What do you think is the key for a batsman to doing well across all formats, given today’s busy cricket calendar when you are playing non-stop?

Adaptability, and another key thing is mindset. If you are open to new ideas, if you are open to do anything for the team, then you will succeed. But it is all about having that good attitude and mindset.