'That was a morning where if I wanted to fly, I would have flown as well.' 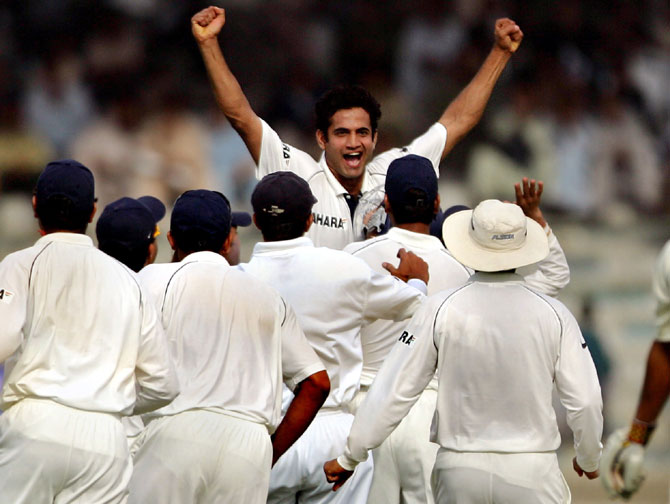 IMAGE: Irfan Pathan, centre, celebrates with his Indian team-mates after dismissing Pakistan's Mohammad Yousuf to complete his hat-trick during the third and final Test in Karachi, January 29, 2006. Photograph: Arko Datta/Reuters

Irfan Pathan made the cricketing world sit up and take notice in 2006.

He would go on to have several more special moments against Pakistan including a match-winning spell against the arch-rivals in the all-important final to help India win the inaugural T20 World Cup in 2007.

Pathan, who retired from cricket in January, also remember the most special day of his career -- when he first played for India.

It was a dream come true for the 19 year old in December 2003 when he made his Test debut against Australia at the Adelaide Oval.

Matthew Hayden's wicket signalled his potential, but it was Adam Gilchrist's wicket in the Sydney Test with a perfect reverse swinging yorker that made the cricketing pundits compare Pathan to Pakistani pace legend Wasim Akram.

athan also played a key role as the all-rounder in India's historic first-ever Test win in Perth in 2008.

In the second part of a multi-part interview with Rediff.com's Harish Kotian, Pathan looks back at some of his best performances for Team India.

One of the most special moments of your career must have been that first over hat-trick for you against Pakistan in the Karachi Test in 2006.

That was a morning where even if I wanted to fly, I would have flown as well.

It was that kind of morning because whatever I was doing it was happening.

You know why it is very rare to take a first over hat-trick because a lot of bowlers take time to warm up.

I actually came in the morning and I bowled six deliveries with full intensity.

I bowled the first ball as much, the second ball started to swing, the third ball too and then the hat-trick came as well because whatever I wanted to do I was able to do it.

I remember I wanted to get the ball away from Salman Butt, it happened.

I wanted to hit the pad below the knee for Younis Khan, that happened.

And then I wanted to hit the pads of Mohammad Yousuf, and that also happened, but he was bowled because it swung so much.

People do take hat-tricks, but when they see that kind of swing, which is very rare nowadays, they still talk about it.

It still feels really great to have taken the hat-trick.

Another big performance against Pakistan for you was in the 2007 World T20 final against Pakistan when you took 3/16 in four overs, which included 12 dot balls to win the man of the match.
How special was it to contribute in such a big final?

The reason why it is special because it was the most high-pressure game I have played ever.

It was the final of the World T20 which was happening for the first time, we were the underdogs, the stadium was completely packed.

It was the first time that the World Cup was happening in T20 cricket and we were playing Pakistan in the final, our arch-rivals.

That match itself was so thrilling, it was a low-scoring game.

We had a mid to low level score of 150-odd, so to perform with the ball in such a crucial game it gives you a lot of confidence, a lot of self-belief and a lot of satisfaction more than anything else.

It was such an amazing game when I look back now.

The game was turning every five minutes, like every six deliveries there was something happening.

That is why the final is such a special memory and to win the man of the match award feels so good.

Even before that, in the whole World Cup, I was feeling so good about my bowling even though I was not getting too many wickets.

I wanted to make the difference with the ball because I was getting wickets consistently.

I was swinging the ball. Even though I was bowling first change the ball was coming out of my hands so well.

And that continued in the final where I took the wicket of Shahid Afridi which proved to be very crucial because he was the kind of guy who could take the game away in a matter of few overs.

And then I got Shoaib Malik and we all know who dangerous he can be.

The timing of those wickets made the difference to winning the game.

Do you remember the first time you played for India?
In your debut Test, against Australia in Adelaide on December 16 2003, you opened the bowling with Ajit Agarkar.
How big was it for a 19 year old to get a batsman like Matthew Hayden in just the third over?

First of all, Dada (then Indian captain Sourav Ganguly) was telling me before the game that 'Irfan, I will make you bowl first change.'

But then he changed his mind and gave me the new ball.

And when I bowled and took Hayden's wicket that was a very special moment for me because for a 19 year old to go and play against Australia in Australia is a very tough challenge.

A lot of experienced players struggle as well when they play in Australia.

It is a tough place to play cricket and the Australians play aggressive as well.

I am the kind of guy who is aggressive from the start, so to get Hayden was such a great feeling, to fulfill the dream of playing for India and get the cap and represent the county is very special.

To have the fans cheer for you and to absorb the atmosphere at the Adelaide Oval, that moment will always stay with me.

I was enjoying each and every minute of being out in the middle, bowling each over and then fielding at fine leg.

I remember everything, marking my run up, giving my cap to the umpires, the way I got Hayden's wicket.

He was having some trouble facing me as he was getting hit on the pads regularly.

The ball was pitching on the seam and I was helping getting some help from the flat track at Adelaide.

They scored 500-plus and we also replied strong scoring more than 500, with Rahul Dravid playing a special innings, hitting a double century, while (V V S) Laxman bhai also scored a century.

We managed to win that Test, our first Test win in Australia after 21 years, so that made it even more memorable. 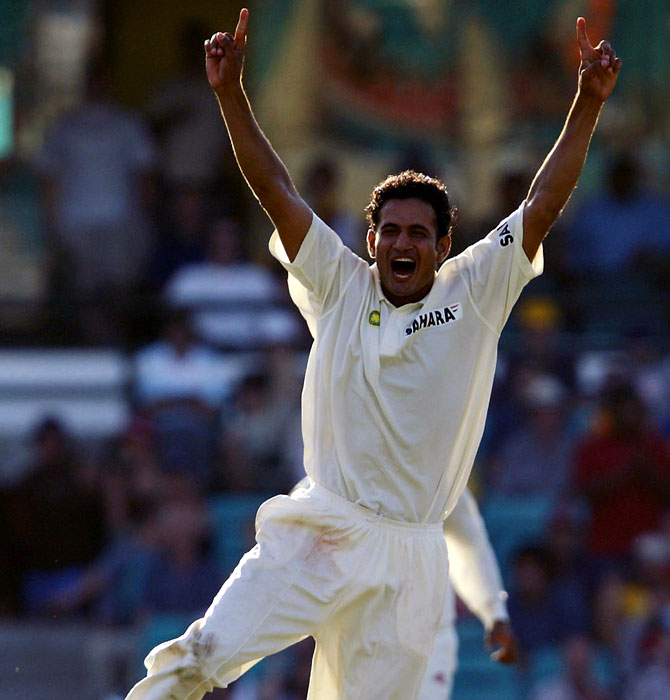 In your second Test, in Sydney, you cleaned up a batsman of the class of Adam Gilchrist with an unplayable delivery -- an inswinging yorker.
Would you say that was the best delivery you ever bowled in your career?

People talk about that delivery so much because they have seen that video.

There were a lot of amazing deliveries that I have bowled. You could see those games on one of the sports channels that came up, but since that channel is not there, you can't see those videos.

But that was a special delivery because it came against a batsman like Gilchrist who was a terror even in Test cricket.

I remember I was talking to Sachin paaji (Tendulkar), he was standing at mid-on and mid-off at that time.

I was talking to him about setting up Gilchrist with every delivery and that really helped me as well.

The way the ball came out of my hand, the way I bowled it as the yorker, it came out perfectly.

I did that in domestic cricket as well, where I was getting left-handed batsmen bowled with reverse swinging yorkers.

I had done that before, but people hadn't seen me doing that, but when I did it in international cricket people talked about it a lot and they were very happy.

I remember Rahul Dravid praising me, praising that wicket. Everyone in the team was so happy and so proud.

Would that be your top wicket? Can you pick your top three wickets in international cricket?

I would say bowling Mohammad Yousuf to complete the hat-trick, the yorker to Adam Gilchrist and the third one would be the yorker I bowled to Russell Arnold (in an ODI in Pune in November 2005).

In the Perth Test in 2008, you played a key role both with bat and ball -- picking up five wickets in the match while scoring 28 and 46 in the second innings while batting at No 3.
How fired up was the team for the Perth Test since a lot of controversy happened during the Sydney Test? Did that bring the team close together?

Everyone was really keen to do well.

We wanted to make a mark as the Indian team, we wanted to give everything we had in that match and do something special.

When you want to win so badly and give everything you have, then you more often than not end up winning the game.

That particular Test match everything went our way, the way we batted, the way we bowled with the new ball, with the old new ball.

Rahul Dravid played an important knock (93) in the first innings, while Sachin paaji batted well in both innings (71 and 13).

Overall, as a team it was fantastic especially after what had happened in the Sydney Test match.

We were not liking some of the things that were happening on the field and off the field.

We were all charged up, that fired us to victory in Perth.

You were compared to Kapil Dev by many in India. Imran Khan compared you with Wasim Akram after watching your performances during the tour of Pakistan in 2003-2004.
Did the comparisons with the great men early on in your career put pressure on you or did they motivate you?

I think that motivated me because Imran Khan was a legend of Pakistan cricket and Kapil Dev was such a big legend in Indian cricket.

I have worked with Kapil Dev, when we did commentary together so it was great knowing him as a person.

When Kapil Dev lifted the World Cup in 1983 and his performance with the ball for the country, he inspired a lot of us to take up cricket, to take up bowling as well.

So when you get compared to legends like him, you always feel special, you feel confident.