He is not seeing what perhaps everyone else around him is seeing: An over-commercialised player who is really an under-performing batsman, observes Sandeep Goyal. 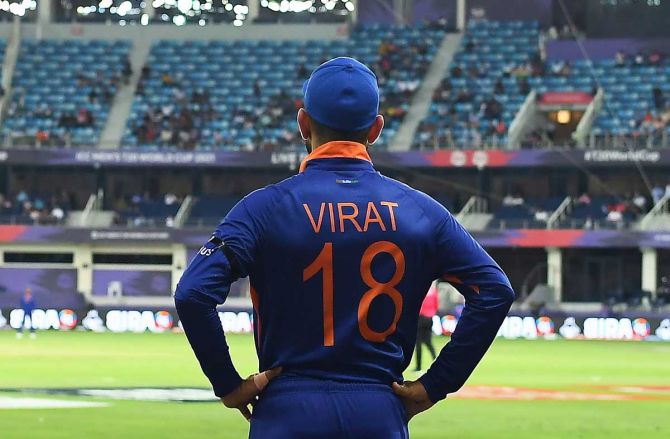 I spoke to more than half a dozen of Virat Kohli's endorsement brands over the last few days.

Will you retain him, or will you be looking for alternatives, I asked?

First reaction, universally, was we will "wait-and-watch".

So, me being me, I asked wait for what, and watch out for what?

Then, one of them slowly opened up and said, "Now that he is no longer captain, maybe he will drop price."

Ahha! Another added, "We are thinking of commissioning research on whether he continues to be as popular as before."

Aawww! A third came up with a different perspective, "If he doesn't keep his place in the side, we will have to let him go."

Oh, is that really a possibility, I asked?

"Well, he's gone without a century in 30 innings -- if Ajinkya Rahane and Cheteshwar Pujara can be on the watch-list, why not him?

"Many in the BCCI (Board of Control for Cricket in India) don't like him anyway."

Mm...mmm. Finally came the perspective that I was least prepared for.

"Virat had started to believe he was above ordinary mortals. His handlers would keep you dangling for months for that one day of shooting he was committed to in the contract. To shoot with him was like trying to squeeze a truck into a parking space for a two-wheeler -- he was over-committed to brands and there would be a constant queue to get his time and attention. And through all this his agents were rude, aloof and un-cooperative."

I wasn't sure if that was really true. But at least that is the general impression going around.

The last 15-odd months are eminently forgettable for Virat Kohli.

It all started with the 36-all out nadir in Adelaide in December 2020.

Kohli left the same evening for his pre-planned and pre-announced paternity leave.

Stop gap captain, Ajinkya Rahane, then delivered the impossible -- in fact, a miracle. India won the second Test in Melbourne by 8 wickets, drew out the third Test in Sydney and won the fourth Test in Brisbane by 3 wickets.

This, I think, was the beginning of the end for Captain Kohli.

Many asked why Kohli could not have postponed his return home, especially since the Indian team was at its lowest ebb ever, and needed him more than ever before.

But the more prevalent, and perhaps more uncharitable, view was that India could never have won the Australia series if Kohli had still been around as captain.

In continuing with his arid record in International Cricket Council (ICC) tournaments, India played the 2021 ICC World Test Championship Final against New Zealand under Captain Kohli in Southampton and lost by 8 wickets. That dented Brand Kohli even further.

A month before the 2021 T20 World Cup, Kohli announced that the tournament would be his last stint as T20 captain.

India played their first match versus Pakistan, losing by 10 wickets. After that, they suffered an 8-wicket loss against New Zealand.

India were unceremoniously knocked out of the World Cup. Kohli's stock plunged even further.

Then there was the sad saga around the One Day International captaincy. Kohli was dropped unceremoniously. But it is his crossing of swords with BCCI President Sourav Ganguly that weakened his personal brand even more.

Instead of coming across as an aggrieved (successful) captain who had been unjustly shafted, he came across as a petulant and bad loser who somehow thought that the Indian captaincy was his for keeps.

Kohli's stepping down after the 2-1 drubbing in South Africa was therefore only to be expected.

The departure of Ravi Shastri as head coach had already weakened Kohli's position in the dressing room.

Building his equation with Rahul Dravid would have taken time. His batting form continued to desert him during the series, apart from a patient and persevering 79 in the third Test.

Returning home on paternity leave following 36-all out was sheer self-entitlement and self-indulgence as far as the cricketing world was concerned.

Stepping down from the T20I captaincy was self-sacrifice. Or so he intended it.

The ODI captaincy fracas was a combination of self-pity, self-defence and above all a fight for self-esteem.

Stepping down from Test captaincy now is self-realisation and self-righteousness. But what Brand Kohli needs today, more than anything else, is self-introspection.

He is currently in a state of self-denial. He is not seeing what perhaps everyone else around him is seeing: An over-commercialised player who is really an under-performing batsman.

Most of his current woes are self-inflicted. He should have said no to unfettered greed when brands were queuing up to sign him on.

He continued to do more and more ads, at prices that kept going higher and higher. And that, more than anything has become self-defeating.

Self-congratulatory messages by wife Anushka, meanwhile, are not elevating the public mood.

Kohli needs some urgent self-appraisal. He needs to dispel any self-doubt; indulge in some self-help, some self-correction and get back his self-belief.

The phoenix can rise again. 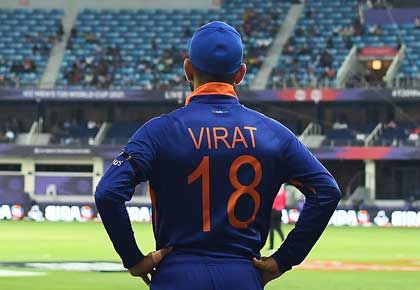