Given the relative paucity of cricket this year, Test cricket has emerged as a healer for deprived fans, notes Dhruv Munjal. 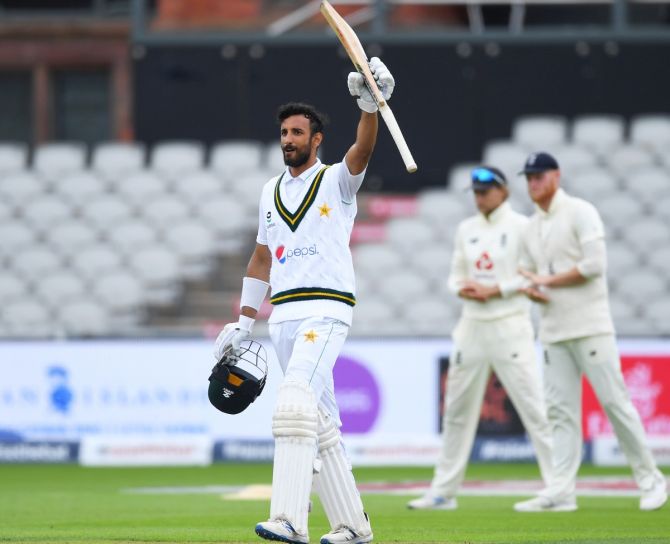 IMAGE: Shan Masood celebrates his century during the first Test between England and Pakistan at the Emirates Old Trafford in Manchester, August 6, 2020. Photograph: Gareth Copley/Getty Images

Against England last month, Pakistan's Shan Masood notched up a third consecutive Test century, exhibiting a kind of industry that paid ample obeisance to the character of the city he was batting in, Manchester.

The opener's handling of Stuart Broad and James Anderson was consummate, evidently the performance of a batsman desperate to make up for lost time -- Masood is 30, but only 21 Test matches old.

Masood's masterclass in patience was followed by the Pakistani pacers tearing through the English top order.

If Test cricket is your thing, then this was a gift from the heavens: An old-fashioned hundred from a gritty opener followed by a breathless display of raw, fast bowling. Given the relative paucity of cricket this year, the longest format has emerged as a healer for deprived fans; an unlikely cure for the hollowness that has come to typify the lives of the sport's followers worldwide.

The England-West Indies engagement, the one that kickstarted cricket in the post-plague world in July, was a whole lot of fun: The unfancied visitors surprising the English in the first Test, with the hosts then roaring back and condemning the Windies to heavy back-to-back defeats.

The Pakistan series was just as fascinating, not necessarily from a novelty standpoint, but purely in terms of the quality of cricket it offered. At which point, it is, perhaps, worth asking what the impending inauguration of the new season of the Indian Premier League -- a format so detached from convention that it sometimes feels like a different sport -- means for cricket.

I'm quite sure I'm in the minority here, but the barren months of peak summer, minus the quotidian distraction of IPL cricket, didn't feel so barren, after all.

They felt more like a deep cleanse, a much-needed detox in these times of endless -- and often meaningless -- T20 cricket.

This is not to disparage the format's popularity, or to question its monumental success, but there is enough evidence -- partially due to leagues cropping up everywhere -- to suggest that this constant bombardment of live cricket has made some of us indifferent to the game's shortest format.

In recent years, T20 cricket has, of course, morphed into something much more than brainless slogging and damage control -- a format with its own unique tactical intricacies. But at its core, it remains a takeaway meal in a restaurant that was built on fine dining. Having said that, the return of the IPL, albeit slated to be played in a foreign country and in front of empty stadiums, is cause for jubilation for a majority of cricket-starved fans.

It may end up producing some great cricket, too. Even so, you can't help but wonder if the International Cricket Council could have used this seemingly apocalyptic year as an opportunity to further the case for Test cricket -- which has made for lovely viewing of late -- or even 50-over cricket, which has been suffering from dwindling crowds and falling ratings of its own.

Following their series loss against England, West Indies Skipper Jason Holder urged Joe Root's team to tour the Caribbean later in the year, in an attempt to boost revenue for the financially beleaguered West Indies cricket board.

Such bilateral series would, ideally at least, ensure more equitable distribution of revenue among international teams, as opposed to the IPL, where the bulk of the earnings are pocketed by the Board of Control for Cricket in India. Moreover, the ICC's decision to postpone the World T20 -- originally scheduled to be held in Australia from October 18 to November 15 -- to ostensibly make room for the IPL reeks of the kind of power the BCCI holds over international cricket's governing body.

Hosting a 16-team tournament Down Under amid the current climate was always going to be cumbersome, but there is a feeling that the BCCI may have forced the ICC's hand.

One can also argue that organising a competition in the UAE with players from different countries should, on paper at least, be equally tough.

It is, perhaps, worth noting that in a year that has forced the cancellation of the Olympics, as well as Wimbledon, arguably the most prestigious annual sporting event in the world, the BCCI, through sheer heft and ambition, has found a way to squeeze a full IPL season in.

And now that it is happening, one can only hope that the IPL brings with it its share of palliative qualities; hopefully, some semblance of normalcy amid this sea of anxiety.

Its financial and political shenanigans aside, if the IPL can, once again, showcase sport's hallowed powers of healing, it would have more than done its job.