Struggling with his form, a downcast Australian skipper Ricky Ponting on Tuesday crashed out of top 20 Test batsmen list for the first time in nearly a decade in the latest ICC ranking.

The Tasmanian, who turns 36 on December 19, dropped 12 places to occupy 25th, his lowest ranking since 2001 and has been replaced by England's Kevin Pietersen who scored a mammoth 227 to help his team win the Adelaide Test.

Pietersen made a huge leap of 12 places to return to the top 20 at the 16th position. 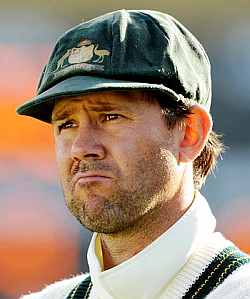 Compatriot Jonathan Trott also continued his rise up the batting rankings and is now occupying sixth place after scoring 78 in Adelaide during the second Ashes Test.

The 29-year-old is the highest-ranked England batsman with the next closest being England vice-captain Alastair Cook who has climbed nine places to sit in 13th place.

However, Gayle's team-mates Brendan Nash (43) and Darren Bravo (69) have both made in-roads on the Test batsmen's rankings but Sri Lankan captain Kumar Sangakkara still heads the numero uno status with India's Sachin Tendulkar in second place.

Swann's five-wicket haul in the second innings of the Adelaide Test has moved him to within 14 ratings points of Steyn, edging him closer to the top spot.

A good performance in the Perth and Melbourne Tests could see Swann end the year in the number one position. Australia's Peter Siddle, meanwhile, has slipped three places to 17th position.

There is no change at the top of the ICC Player Rankings for Test all-rounders with South Africa's Jacques Kallis still leading the field.

However, Australia's Shane Watson has displaced England's Stuart Broad for fourth place in the all-rounder's rankings after the 29-year-old Queenslander scored 108 runs and claimed 1-44 during the second Ashes Test.