The Indian cricket team showed solidarity for the Sri Lankan cricketers who were attacked in Lahore on Tuesday by wearing black armbands in protest.

Six Sri Lankan players were wounded when around a dozen gunmen attacked the team's bus as it was on its way to the Gadaffi stadium in Lahore [Images] to resume play on Day 3 of the second Test against Pakistan. 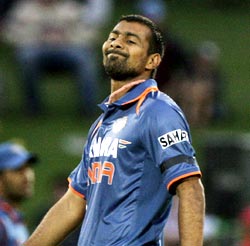 The Indian team, playing the first One-Day International against New Zealand [Images] in Napier, learnt about the attacks after posting 273-4 in 38 overs after electing to bat and wore black armbands when it took the field after the innings break.

The Sri Lanka [Images] team, which was invited to Pakistan after India had pulled out following the Mumbai terror attacks, immediately cancelled the rest of the tour.

Pakistan TV showed footage of gunmen with rifles and backpacks running through the streets and firing on unidentified vehicles.

The driver of the Sri Lankan team coach said one of the attackers had thrown a grenade under the bus, but it did not detonate.