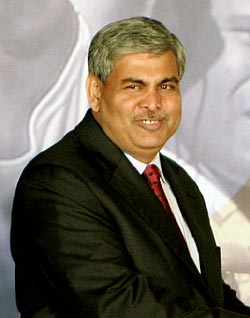 In a major decision, the Board of Control for Cricket in India (BCCI) paved the way for the entry of ex-Indian Cricket League (ICL) players numbering over 75 in the third edition of the Indian Premier League [Images] (IPL) starting on March 12 at Hyderabad.

The Board took this decision at its all-powerful Working Committee meeting in Mumbai [Images] that also approved a whopping increase in the prize money for Ranji Trophy champions and a grant of Rs 25 crore to the All India Football Federation spread over two years.

But apparently there is a rider to this green signal which has not been spelt out officially but was confirmed by other BCCI sources, who said no player against whom match-fixing charges have been levelled (by ICL), notably ex-international Dinesh Mongia of Punjab [Images], would be allowed to take part in the cash-rich T20 event.

This came in the wake of a letter written by AIFF acting president Praful Patel [Images] to the BCCI requesting for this sum which was, in turn, recommended by the Finance Committee headed by Rajiv Shukla to the Working Committee for its approval.

The Board has nominated Bangalore umpire Shavir Tarapore and Ahmedabad's [Images] Amish Saheba for the International Cricket Council [Images] (ICC [Images])'s International Panel while naming Sanjay Hazare of Baroda as the TV umpire.

The team and support staff that won the Emerging Players tournament in Australia [Images] will be paid a bonus of Rs 1 lakh each.