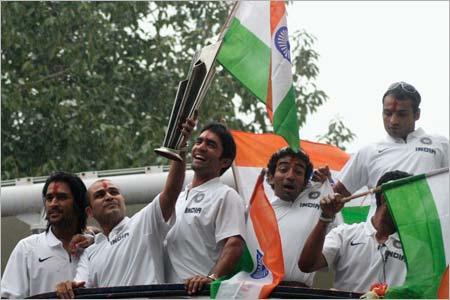 The Champions are home.

Team India, with members vying to hold aloft the Twenty20 World Cup trophy, touched down on Indian soil around 8.15 on Wednesday morning -- and Mumbai went nuts.

Oblivious of the pouring rain, fans have lined the 30km route from the international airport in Sahar to the Wankhede Stadium, where the team will be felicitated.

And in tribute to the dancing fans, the team members shrugged off their jet lag and the elements, climbed to the top of an open bus fronted by a photograph of a triumphant captain Mahendra Singh Dhoni [Images] and the words VIJAY RATH, and danced in response to the dancing fans.

Traffic on the route is at a standstill, and no one seems to mind -- the mood is one of total celebration, and the younger among the fans have begun running alongside the team bus, dancing and, whenever their heroes show signs of standing still, egging them on to dance again.

Yuvraj and Sreesanth [Images] have established themselves as the cheerleaders, dancing non-stop on the roof of the bus, and exhorting the fans lining the roads to applaud, to dance, to celebrate. The bus is travelling at a little over walking pace along Mumbai roads, trailing the contingent of fans running alongside, and the media in two buses following the team bus.

Schools and colleges across Mumbai report near zero attendance, and it is official with authorities permitting the students to take part in the celebrations.

Across the 30-km cavalcade route, large groups of kids from various schools and colleges have set up camp, complete with musical instruments, and are busy competing with each other in the fervency of their celebrations.

Chak de India has been clearly established as the youth anthem; it is by a long mile the most popular song among the kids.

At the Wankhede Stadium, meanwhile, hordes of fans have been queing up since early morning, attempting to get into the stadium that has thrown its doors open to the public for free.

The stands are filling up rapidly -- and over the public address system, Mere Desh Ki Dharti blares out at a volume only exceeded by the defeaning cheers of fans dancing on the seats, and in the aisles.

Three of the stands have filled up, and despite the steady rain, few fans seem in a mood to burden themselves with umbrellas -- hands, they feel, are for waving.

A troupe of Maharashtrian folk singers has taken up strategic position in one of the stands, and around them an impromptu dance party is on.

Every once in a while, a huge roar goes around the stadium, and no one seems to know exactly why.

"Shah Rukh [Images] has come," a fan interrupts his own cheering to explain. "Nonsense, it is Sachin who just got here and has moved into the VIP enclosure," another fan corrects the first.

Doesn't matter -- right here, right now, the fans are in the mood to cheer everything. And nothing.

Elsewhere, fans are busy practising their Mexican waves -- to the observer, it is amusing to see the seriousness with which the practice is being conducted.

Arrangements are being made for the felicitations. Maharashtra Chief Minister Vilasrao Deshmukh, Deputy Chief Minister RR Patil, the top brass of the cricket board, including president Sharad Pawar [Images], vice-presidents Lalit Modi and Rajeev Shukla, secretary Niranjan Shah and chief selector Dilip Vengsarkar, who received the players at the airport, have gone ahead of the cavalcade to the Wankhede, where they will once again formally receive the players and felicitate them. Security had been beefed up at the airport, but still the players, surrounded by policemen and fans, had a tough time getting out and finally board the open bus.

Captain Mahendra Singh Dhoni was the first to come out, along with administrative manager Sunil Dev.

Star batsman Yuvraj Singh [Images] looked a little jaded when he came out of the airport, but once he boarded the bus, the celebrating fans appear to have given the dashing Punjab player a fresh lease of energy -- he broke into a bhangra, and hasn't stopped since.

In the midst of the chaos, Mahendra Singh Dhoni remains very much the composed captain.

On the roof of the team bus, he stands towards the rear, watching his 'boys' celebrate, occasionally stepping up to pull back a player leaning too far over the railings, ensuring that the trophy various members of the side have been holding aloft is not damaged, and using his cellphone to coordinate various details.

Though the official celebration will see its quota of speeches by sundry politicians, the day seems to be about a young team, and fans who are in a mood to hail the future of Indian cricket.

At Mahim junction, a group of college students who had been waiting in the rain since 8 am for the cavalcade to pass through said the Cup win was the cue for the seniors to retire, and for this young, fearless lot to take over. "This team should play Australia, without the seniors," Vikas Sawant, one of the students, said, over the noise of general celebration.

"We will lose to the world champions but so what, we have no guarantee that we will win with the seniors. Let us play fearless cricket for now; the victories will come soon enough."

Two hours after they landed in Mumbai, Team India is still dancing on the open roof of the bus.

They seem charged with contagious electricity; there is no sign of the fatigue of a tough tournament, no sign of jet lag, no awarness, even, that this Saturday they have to take on the world champion Australian side in the first of a seven-game series of tough one-dayers. For now, it is joy unconfined -- and perhaps that is how it should be.

"No one should under-estimate us. We know how to snatch victory from the jaws of defeat. People tend to forget that we are Indians after all."

"Yes, it was a long-awaited victory. Allah has been kind to us."

As Mahendra Singh Dohni and his victorious team swept through S V Road at the Mumbai surburb of Mahim, cricket was the only topic of conversation.

The motorcade moved on, the conversation continued with a fervor the constant rain couldn't damp. Two Muslim men in white, with the traditional cap firmly on their heads, walked along the cavalcade route in the wake of the team bus.

Mohammed Iqbal, walking to work at the tailoring business he runs, is thrilled. "This is the regular time I leave for work," he said, unable to stop smiling. "I never thought I see our cricket team like this."

Traffic was at a standstill, but no one minded - no impatient honking, no engines growling, no late-for-work folks yelling abuse: the mood today is of joy, of celebration, and personal inconvenience is shrugged aside as of no moment.

People were heard calling each other on their cellphones, updating friends about the progress of the cavalcade. Several got down from the buses taking them to work, and joined the throngs lining the route.

Victory brings its own camaraderie - total strangers hugged each other oblivious to caste, religion or even sex.

The junction between Bandra and Mahim was a sight: car doors hung open, and there were people on the roofs of the car, precariously balanced, trying to get a glimpse of their heroes.

As the bus came into view in a blaze of orange and white and green balloons, the crowd surged forward; young girls jumped out of buses and joined the stream of fans racing after the bus, dancing in the rain.

Long moment s of berserk joy - and the cavalcade moved on; those who remained asked each other whether they had got a good look, compared pix they had taken on their cell phones, yelled and screamed in unconfined excitement.

Some fans jumped on their bikes and took off after the team bus.

A group of teenagers, walking into Mahim the church for a Mass, couldn't keep their mind on their prayers. "They really played their hearts out, man! They really deserved this!"

RAJA SEN AT THE WANKHEDE:

The Jo Jeeta Wohi Sikander theme has taken over the PA address system; an official announced that the team will be here any moment.

There is a crackling, sizzling sense of electricity all around; the crowd, energy barely contained, looks set to explode in mass delirium -- and while they wait for the fans, the music is doing a good job of keeping the fervor at fever pitch.

At this legendary cradle of  Indian cricket, and along the route from here to Haji Ali, the roads have been taken over by school and college children, drums and cymbals and tambourines crashing in a non stop beat of victory and joy.

But never mind the young -- old ladies, who seem barely able to stand, are braving the rains to wave at the team bus.

A bunch of footballers, dressed in their uniforms, have interrupted their morning practice to line the road outside Shivaji Park and cheer heroes from another game.

Cellphones are ubiquitous -- everyone holds his or her phone overhead, hoping to snag the perfect shot.

At several places along the road, offices are "open" only in name; the entire staff of banks and other commercial establishments are out on the road. Their customers don't seem to mind, because they are right there alongside the employees, excitedly updating each other about the progress of the cavalcade, recalling moments from the final and rooting for their favorite players.

As the suspense mounts, any vehicle that passes by is cheered -- including, to his surprise, a bloke passing on a bicycle.

The cavalcade of 50-odd police motorcycles preceding the team bus has moved a good five kms ahead of the team bus, and as they pass, even they get a cheer.

Dhoni is clearly the favorite -- it is his name they chant, like a mantra to a young, fearless India.

The police have been magnificient. Having worked round the clock yesterday to ensure that the Ganesh immersion went off in orderly fashion, they have now turned out to help smooth the path of the cricket team -- and for all their tiredness, they are in indulgent mood, allowing the fans to get quiteclose to the bus.

As the bus passes, young fans jump on their motorcyles and peel off after them, forming a constantly lengthening 'tail' to the bus.

We are regularly updating the story. Keep boarding rediff!

Text: Harish Kotian with the team and Raja Sen at the Wankhede | Photograph: Rajesh Karkera