Having forced his way into the Test squad, India's pace rookie S Sreesanth [Images] has devised a plan for the English batsmen and believes that he could provide a much-needed variety to the left-arm oriented pace bowling attack. 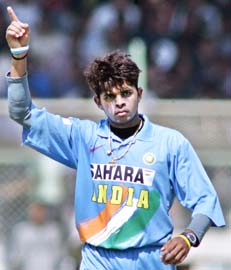 The Kerala [Images] player, who was picked for the first Test after his impressive performance in the one-dayers against Pakistan, said he was looking at making the most of the opportunity if given a chance.

Sreesanth, who once had bade farewell to cricket only to embrace it later, said it should not be a worry to the Indian team that they did not have a genuine speedster like Brett Lee [Images] or Shoaib Akhtar [Images] in its ranks.

"I don't think bowling fast is important. I am sure Irfan can bowl at 140 kph if he is in good rhythm. I have bowled 145 kph in Sri Lanka [Images]. Munaf (Patel) bowled 146 kph (in the tour game against England [Images]). There are bowlers (who can bowl quick)," he said.

Sreesanth, who started his career as a leg-spinner idolising Anil Kumble [Images], thought that the natural aggression in him turned him into a seamer.