As India's finest number three batsman, Rahul Dravid [Images] has often shown application rather than flair, displaying the perfect qualities for an innings-builder.

The 32-year-old, who replaced Sourav Ganguly [Images] as captain on Thursday, will need the same focus to revive India's flagging one-day fortunes. 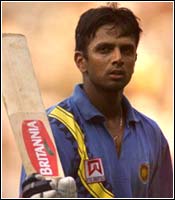 In an unusual step, the selectors named Dravid captain for home one-day series against Sri Lanka [Images] and South Africa.

That is viewed as the end of the road as captain for Ganguly, who is already nursing a bad elbow and is doubtful for the Sri Lanka series.

It is not the first time Dravid would be at the helm.

India's third highest Test run-getter has captained the side in five Tests and 17 one-dayers, deputising when Ganguly was been injured or suspended, but it finally appears to be a permanent changing of the guard.

Ganguly, 33, had been under huge pressure due to a prolonged batting slump.

He took over the job in 2000 and emerged as India's most successful Test captain with 21 victories in 49 matches.

However, a major row with coach Greg Chappell [Images] during last month's Zimbabwe tour, sparked by his poor form and the team's one-day slump, undermined Ganguly's position and the selectors have acted swiftly to try and revive the team's fortunes.

Dravid still has a mountain to climb.

The Karnataka batsman must lift a side which has not won a one-day tournament featuring more than two teams since 2002 but at least he can lead by example with his batting.

Dravid, with around 8,000 Test and one-day runs apiece, has come a long way since he started.

He made 95 on debut at Lord's in 1996, when Ganguly cracked 131, and has usually been upstaged by team mates whenever he has done well.

In 1999, he was involved in a world record one-day international stand of 318 with Ganguly against Sri Lanka in the World Cup. Dravid's masterly 145 was overshadowed by Ganguly's flamboyant 183 including seven sixes.

Against Australia in 2001, he scored 180 in India's highest Test partnership of 376 but it was V V S Laxman who grabbed all the plaudits with a then record 281 to ensure a rare victory after being asked to follow on.

Dravid changed the script, however, against England [Images] at The Oval in 2002 with a flawless 217. When he returned to the pavilion, India had amassed 508 and the next highest score was 54.

When he struck a century against West Indies [Images] in Bombay in 2002, he had become only the fourth player to score hundreds in four consecutive Test innings.

Nicknamed "The Wall", Dravid's aura is not just about the runs he gets but when he gets them. His best knocks have invariably come in adverse circumstances or when India have been pushing for victory.

The only overseas win in recent times in which he did not contribute with the bat was against Pakistan at Multan last month, when he was leading the side in Ganguly's absence.

Captaincy could reveal another dimension in the wall.