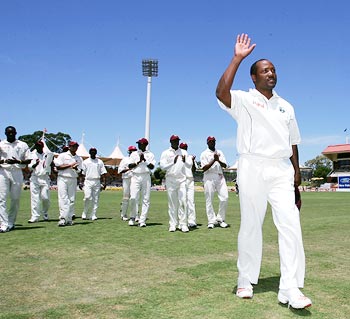 West Indies batting ace Brian Lara [Images] acknowledges the applause from the crowd as he leaves the field after what could be his last Test in Australia, at the end of the third Test against Australia, in Adelaide, on Tuesday.

The left-hander scored 226 in the West Indies' [Images] first innings to surpass Allan Border's [Images] career tally of 11,174 runs and add the aggregate world record to his individual world record score of 400 not out.

The Trinidadian became the first West Indian since Gary Sobers to hold the run-scoring record. Lara also holds the world record for the highest individual Test (400 not out) and first-class (501 not out) scores.

The 36-year-old, who plans to play till the West Indies host the World Cup in 2007, may not be seen in Australia again in a Test. The next West Indies' tour of Australia is not scheduled for another four years, when he will be 40.

Lara has been greatly adored in Australia, where he has produced some of his greatest innings. He scored his first Test hundred (277) against Border's Australian team in Sydney in 1992-93. The left-hander played 19 Tests in Australia, scoring 1469 runs at 41.97, with four centuries and four half-centuries.