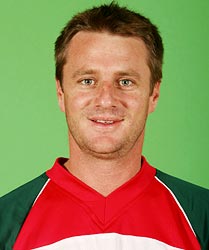 "The decision is up to Sachin. However, in an ideal world, a lighter bat would be preferable, but the decision on the bat weight is Sachin's, because after 16 years of cricket at this level I am not going to tell him what bat to use and what not to. I can only advice him and he can take that advice," Gloster told rediff.com on Thursday.

Tendulkar's left elbow was operated upon by Dr Andrew Wallace at The Hospital of St John & St Elizabeth in London, on Tuesday.

Professor Bruce Elliott, an authority on biomechanics at the University of Western Australia, had told rediff.com that Tendulkar's injury may have not healed completely because of the heavy bat he uses. Gloster agreed with Elliott's assumption, saying, "It is obviously related to the workload and to the weight of the bat."

"But it is up to Sachin; we can advice him on what weight of a bat to use. He actually did change the weight of his bat during the last series against Pakistan, so that can be a factor. But I also believe that once you got a chronic problem like tennis elbow, there is a fair chance it is going to persist for a long time," Gloster added.

Tennis elbow is a term used to describe pain and inflammation in the region of the elbow joint. The problem was first discovered in August last year, when Tendulkar was ruled out of the tri-series in Holland, and it has hampered him since.

He said the decision to undergo surgery was not a planned one but taken after a meeting with the Dr Wallace.

"We never went to London intending Sachin to have surgery. We went there just to make comparisons [of the scans]. The advice given by the surgeon [Dr Wallace] was that if he was to have the surgery, it would be in his best interest to prolonging his career.

"The decision on the surgery was made by the specialist in London. When Sachin went to London he had with him some scans that were taken in September last year and then we had some new scans taken in London and comparisons were made against both. The surgeon felt that there were some progressive degenerative changes around the tendon insertion on the side of the elbow.

"The surgeon felt that surgery was indicated to give Sachin the best possible chance of playing pain-free from this point on."

The doctor just did the debridement [surgical excision of dead, devitalized, or contaminated tissue] and the remodeling of the affected tendon on the lateral elbow.

So what will the recovery phase be? How long will it take?

"He will have a routine follow-up check in about a week, and possibly the stitches would be removed then. One would expect another follow-up in another four weeks' time, which is a fairly normal procedure.

"The initial phase is a resting phase to allow the tendon to heal. So he will be in a protective sling for a few days, and then, after 4 to 6 weeks, we will start gradually increasing the stretching," Gloster informed.

Gloster, who was the physio of the Bangladesh and Surrey teams, is hopeful of Tendulkar returning to cricket in four months.

"We would be fairly optimistic that by 16 weeks he would be returning to play. That's going on by the surgeon's advice and by what the surgeon has seen from the other sportspeople he has operated upon with the same procedure.

"I can only go by what the surgeon says. And he feels that by the end of 16 weeks Sachin will be relatively pain-free; that is what the aim of the surgery was. He is confident that those outcomes will be fulfilled," Gloster said.

Gloster agreed that he has an important role to perform during Tendulkar's four-month lay-off.

"My role, firstly, will be to take the advice from the surgeon and then act on his advice. So my main role will be the graduated return of function to that arm.

"What I mean by graduated is the progressive loading and ensuring that when you are re-loading the arm with strength exercises and stretching exercises, the muscle and the tendon tissue has time to adapt to those new loads.

"It's a strength and a progressive strength regime, which is very, very important, so that when he goes back to play the tensile strength in that tendon is as strong as it can be," he said.

He is also expressed confidence that Tendulkar's tennis elbow problem should be resolved forever.

"Generally, with this type of surgery, once the surgery has taken place we are confident that the problem should be resolved."

Gloster felt Tendulkar is around 10-12 weeks away from having a batting session in the nets.

"First of all, he will have to get clearance from the surgeon. I would expect that to be around the 10-12 week mark. But, again, that's up to the surgeon. Everybody is a little bit different, but I would hope that he would be able to bat in the nets around that time."

However, he warned that the batsman's return must be gradual and he must not rush things too soon.

"Whenever anybody returns to sport after any injury, not only this type of injury but any sort of injury, you have to allow the body to adapt to its new load.

"It is a very, very graded, gradual return because the new muscle and the new tendon tissue has to have time to adapt."