'If Vodafone decides to quit India, the telecom market in the country will be left poorer. We need international players, especially in a sector like telecom, for global best practices and the latest in technology, if nothing else', says Nivedita Mookerji. 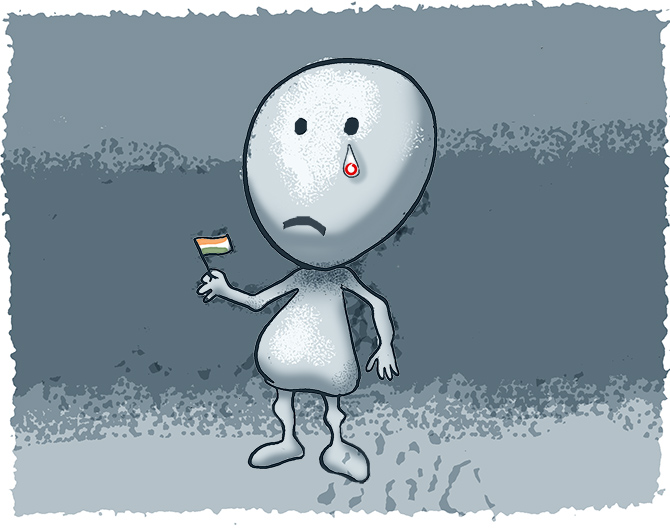 Balesh Sharma stepping down and Ravinder Takkar taking over as the CEO of Vodafone Idea are not ordinary events in the life of a company.

If analysts are to be believed, the latest top-level change will determine where the telecom company is headed.

For the UK-based telco, a leading player in the world in terms of market value and subscriber numbers, India has been an expensive bet and giving Takkar the top job seems to be a final attempt on its part in gaining shareholder confidence.

If this doesn’t work, exit may be the only way out for the telco, caught in a never-ending tariff war.

It’s another matter that the top executives of the company have not gone beyond calling the Indian telecom market “unsustainable”.

Next October, the Newbury (Berkshire)-headquartered telecom giant will complete 15 years in India.

Vodafone’s India story began in October 2005, when it acquired a 10 per cent stake in Sunil Mittal-promoted Bharti group.

At $ 1.5 billion, that was the single largest foreign investment in the country till then, and the deal made headlines.

But it wasn’t enough being a financial partner to Bharti and soon Vodafone wanted a bigger India play.

In February 2007, after months of negotiation, the British telco announced its decision to pay $ 11.1 billion in cash to buy a 67 per cent stake in Hutchison Essar (Hutch) from Hong Kong-based business baron Li Ka-Shing.

That again was the single largest foreign investment in the country till then.

During the deal talks, whether it was a celebrity-like treatment given to then Vodafone global CEO Arun Sarin, when he made a rare appearance early morning in a luxury hotel, or it was then Hutch Essar head Asim Ghosh, who had to escape media attention by taking the back gate at a conference venue, Vodafone was at the centre of the telecom narrative in India.

The Voda-Hutch deal was completed in 2009.

Soon, Vodafone wanted to be on its own, of course, helped by the easing contours of foreign direct investment regulations in telecom.

Essar group’s Ruias, who became Vodafone’s local partner after the Hutch deal, left the entire business in the hands of the UK telco a few years later.

But, this time, reality struck hard.

The next local tango for Vodafone, in March 2017, was with Aditya Birla group chairman Kumar Mangalam Birla-led Idea Cellular.

The two agreed to merge their Indian operations in a $ 23-billion deal.

The idea was to create a new giant to take on Jio. The plot clearly didn’t work.

Vodafone’s merger with Idea was a product of compulsion and didn’t yield the desired results.

It has been losing subscriber numbers and the losses are widening too.

Difference in culture between the two companies and an integration not executed well, only made things worse.

A Vodafone executive familiar with the workings of the multinational had recently pointed out that nowhere else in the world had the telco confronted a situation like this.

He was referring to Reliance Jio taking on all others in the market through disruptive pricing.

However, that does not mean Vodafone has not been disenchanted with India before.

The UPA-2 decision to retrospectively tax Vodafone has been the biggest setback for the UK-based telco, much before Jio came into the picture.

The government at that time had raised a tax demand of Rs 11,000 crore related to Vodafone’s acquisition of Hutchison Telecom stake in 2009.

The amount had increased to Rs 20,000 crore, including interest and penalties.

While the Supreme Court subsequently quashed the demand in January 2012, the government amended the IT Act retrospectively, to impose the liability back on Vodafone.

As for its current business, Vodafone Idea has said it won’t participate in the 5G spectrum auction at the current price fixed by the Telecom Regulatory Authority of India.

Who knows what the next step of the UK partner would be.

If at all it’s an exit, it won’t be a first for Vodafone.

New Zealand and Japan are among the geographies that the group exited when the going got tough.

There are hurdles in Australia as well as recently the regulator stopped a planned $ 7.7-billion merger of Vodafone’s struggling Australian business with TPG Telecom.

There are indications that an exit from Australia cannot be ruled out.

If Vodafone indeed decides to quit India, the telecom market in the country, which once had telcos from across the world, will be left poorer.

We need international players, especially in a sector like telecom, for global best practices and the latest in technology, if nothing else.