News
Business
Movies
Sports
Cricket
Get Ahead
Money Tips
Shopping
Sign in  |  Create a Rediffmail account
Rediff.com  » Business » 'Corona is a wake up call for all of us' After days of deliberation on the venue for lunch, my guest decides it would be The Qube at The Leela Palace in Chanakyapuri, Delhi.

Since I hadn't been to The Qube, a multi-cuisine restaurant overlooking the lush green grounds of the luxury hotel, I am excited about trying a new place, confident that my guest would take charge of the menu and guide me through the maze of exotic sounding dishes crisscrossing countries and continents.

At noon, the appointed time for our lunch on a weekday, I realise my guest N V 'Tiger' Tyagarajan is visiting the place for the first time and knows about the specialties here as little as I do. In some ways, that makes us equals and we start off on that comforting note.

Dressed informally, the guest walks into an almost empty restaurant a few minutes after I land there.

The buffet starts at 12.30 and the place picks up pace then, but we want to have a relaxed conversation in a corner table and therefore settle for an à la carte meal instead.

With the greetings done and menu cards before us, I ask my guest for the best options here.

It's then that he reveals he has no clue. The long-time CEO of American professional services firm Genpact gives it away that the venue was decided by his team as Leela happens to be among the hotels closest to Delhi airport.

He has to catch a flight to Mumbai to meet his mother and son, before flying back to the US.

Although Tiger, as he's better known as, mostly works out of the New York office, he has maintained that Genpact has no headquarters. "My job and the industry allows me to go back and forth... I interact with India pretty much every day."

Typically, he visits India twice a year, and definitely in the second part of December when the West is on holiday and it also allows him to escape the American chill.

As the still wintry sun filters in through the glass walls, I follow my guest in asking for a watermelon juice.

To get the business of ordering out of the way, we select the starters as well as the main course in one go: Vegetable dimsums and Thai green curry with white jasmine rice.

He declares he's a foodie and that he loves to eat anything and everything, preferably vegetarian.

But through the lunch, I discover he's much more interested in conversation on a variety of subjects than in food. "I ask questions all the time because I want to know more... I live my life by curiosity," he says. I too am curious, about his name Tiger.

"Growing up in Bandra, a suburb of Mumbai, my friends in Grade I could not pronounce my name Tyagarajan easily. Once, when we were studying the poem Tyger Tyger, burning bright... by William Blake, and one of my friends said he will call me Tiger since my eyes burn and it sounds like Tyagarajan shortened."

The name stayed on through his academic life at IIT-Bombay and IIM-Ahmedabad and then in his professional journey from Hindustan Lever to Citibank to GE, Genpact.

"Now it's what I am called by everyone... except that I don't play golf," Tiger says, showing his witty side.

The watermelon juice could have been sweeter and spicier but my guest doesn't complain while drinking it till the last drop.

The restaurant staff offers to serve the dimsums but we help ourselves at leisure while talking about Tiger's stint at the GE group since 1994 after which he has not made a resume.

How has he managed such a long stint in one company? "I love what I do," is his answer. We speak about the India connect.

Genpact, where Tiger took charge as the CEO in 2011, has no client in India but 60 per cent of the company's workforce is based in this country.

He explains he's chosen to work from New York because it makes sense to function close to the market.

In terms of the company's business, the US tops the list, followed by Canada, the UK, Western Europe, Japan, Australia... The outsourcing business, as we had known it earlier, has changed dramatically, he points out, adding that "digital was not in our lexicon 10 years ago and now there's nothing without digital".

Artificial intelligence may not be the most spontaneous issue that comes to mind while enjoying a green Thai curry loaded with exotic vegetables, but in the flow of our conversation I ask if AI is indeed killing jobs. "It's a faulty assumption," he says.

"You cannot remove humans from the loop. Whether it's machine learning or AI, past data has to be unbiased. Otherwise, everything goes wrong."

According to Tiger, humankind has found ways to leverage technology for its good and that AI can be a huge benefit.

The Thai curry, cooked with herbs that taste and smell great, is keeping both of us busy before we switch from technology to politics.

"Indian politics is a reflection of what's happening across the world," he says. He's not surprised that Prime Minister Narendra Modi and US President Donald Trump "see eye to eye".

He points at the large gap between aspiration and what is delivered. Who's my citizen and who's not, jobs, technology changing work are questions being asked in India and around the world, he says.

"I'm not surprised with what's happening in India... It's the same in the US... Why is it happening is not just about India, but the world.''

Does he identify the present India with the one he's known when he grew up? "I grew up in Bombay, which is a cosmopolitan microcosm of India..."

True, there have been riots there too, but those were episodic frictions; now it's deeper, he explains while raising his pitch a bit.

As we are almost done with the main course, I ask the guest about dessert. He wants to skip it, and so do I.

We look around to find that the buffet was on but the restaurant has still not filled up. We wonder whether that's because of the coronavirus outbreak that has forced people to quarantine themselves by choice.

We talk about how businesses have been hit all around the world and the over-dependence on China.

His company too has felt the impact and assessments are being done. "Corona is a wake up call for all of us," he says as we decide to order some tea and coffee.

Double-shot espresso is Tiger's choice and I settle for a masala tea. He changes his mind and says he too would have the masala tea.

Once the order is taken, we debate whether it would be an indigenously prepared masala tea or a boring dip tea.

We ask the restaurant staff for more clarity on how the tea would be made. Yes, it's the dip variety, we are told.

The guest plays along and makes a special request -- make it really strong. I keep my fingers crossed when the tea arrives.

To our surprise, it's really well made and we speak about the Hindi movies he's liked -- the list is long -- Dangal, Chak De India!, Lagaan and many more. Sports is the common link, I notice.

"I love sports and have often woken up at 3 or 4 am to watch a cricket match." An early riser, he admits he works quite a lot and all the time.

What keeps him going is the fact that he likes his work and also that morning run at least five times a week listening to podcast that makes him learn new things.

I remind Tiger that he has a flight to catch and that he should be leaving. By this time, he's clearly enjoying the moment and is in no hurry to leave.

Soon, his mobile phone starts ringing: his secretary on the other side tells him to wrap up the lunch.

"Good secretary," he says with a smile before leaving. 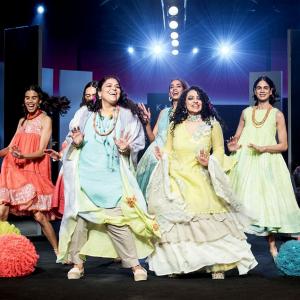 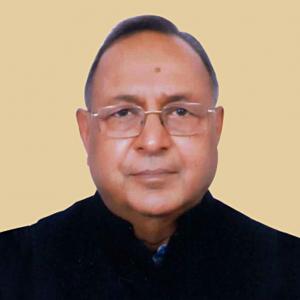