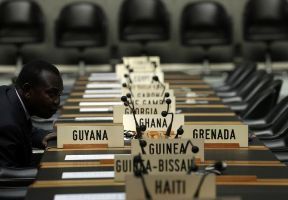 After India and the United States reached an understanding on grain procurement and stockholding nearly two weeks ago, decks were cleared for the endorsement of global agreements on trade facilitation and perpetuation of the "peace clause" on farm and food subsidies by the General Council of the World Trade Organization.

This ends the prolonged impasse in the Doha round of trade talks that had virtually stalled the process of international trade reforms.

Most important, it demonstrates that trade agreements are no longer just about tariffs -- they are also about making trade easier, whether through dovetailing domestic regulations, or through easing actual paperwork.

The agreement on food lets developing countries fix their grain procurement prices and procure foodgrain without fearing penalties on breaching the 10 per cent subsidy cap.

Such an immunity, available under the so-called "peace clause", got somewhat blurred in the Bali package. Whatever the rights and wrongs of India delaying the trade facilitation agreement in order to protect domestic agricultural subsidies, that temporary crisis is at least over.

However, the deeper problem yet remains.

If India does not wish to continually violate the WTO rules, it must also continue to push the WTO to either revisit the reference point of 1986-88 prices for calculating subsidies and pitch it at a recent period, or raise the ceiling on subsidies to enable countries like India to stay within the envisaged cap.

However, regardless of the final shape of the permanent solution to this issue, New Delhi must rationalise and revamp its domestic food management regime to keep food and farm subsidies at sustainable levels.

For this, the recent reforms-oriented moves aimed at cutting down food procurement and stocks would need to be pursued meticulously despite resistance from the states and, more importantly, carried forward.

The Trade Facilitation Agreement, however, is the real benefit of this agreement.

Crafted at the WTO's ninth ministerial at Bali last year and approved now, the TFA seeks to harmonise customs clearance procedures to facilitate smooth and speedy flow of goods across borders.

It is estimated to have the potential to infuse $1 trillion into the global economy and create 21 million jobs by reducing transaction costs.

In particular, it might be expected to encourage the export-led economic growth that many developing countries, including India, strive for.

However, the TFA will also require these nations to invest in upgrading their port infrastructure and rework their customs rules. India is unlikely to be an exception in this regard, though the government maintains that no major changes or fresh investments would be needed to implement this pact.

This is a pity - the commerce ministry should use this as an opportunity to raise Indian customs procedures to world class, which will correspondingly have an impact on ease-of-doing-business indicators.

The final picture would, however, emerge when the new trade facilitation norms are spelt out.

Still, nothing should take away from the achievement of moving the multilateral trade process forward for the first time in two decades.