With nearly a million identified slums, UP urgently requires housing for the poor 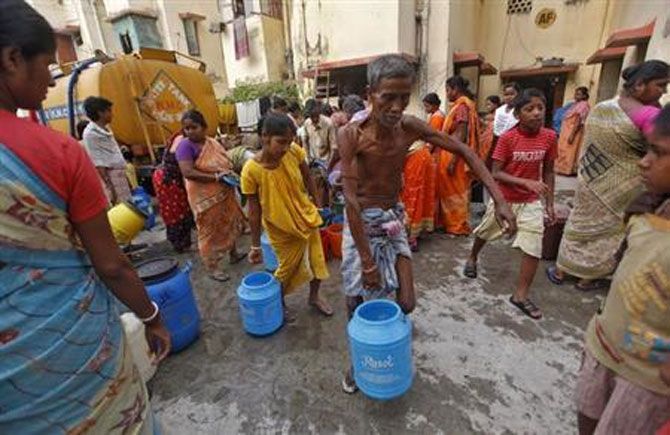 Residents of a free-housing colony are forced to buy water from a commercial tanker because of shoddy supply piping in their buildings. Photograph: Rupak De Choudhury/Reuters.

About 4,000 free houses to be allotted to poor families across Uttar Pradesh (UP) are unfinished and slated for a completion date roughly coinciding with UP state assembly elections in 2017, an enquiry filed by this correspondent under the Right-to-Information (RTI) Act has revealed.

This week, as the government cleared Prime Minister Narendra Modi’s “Housing For All” policy–which hopes to build 2 million homes by 2020 for the urban poor–this cautionary story from India’s most populous state reveals how political rivalries and tardy implementation can stymie government-run housing efforts, failing even the spare expectations of the poor and delivering no political benefits.

Aasra scheme has been launched in all the cities of Uttar Pradesh,” said the RTI response from the State Urban Development Authority, UP.

“Construction of houses is still under way and is to be completed within 18 months. The houses will be allotted once the construction is completed.

Housing for the urban poor is an urgent need in UP (if it were a country, its 200 million people would make it the world’s fifth-largest), where one in four urban residents lives in a slum, according to this government report.

The BSP government reduced by more than half its initial target of building about 100,000 homes each year after the first phase–because of a supposed shortage of beneficiaries in a state where about 6 million people live in urban slums.

Despite central government warnings against entirely free housing, both schemes aimed to provide just that. The two programmes diverge mainly over the social groups chosen for the free houses. While the BSP government reserved 50 per cent of these houses for scheduled castes and scheduled tribes, the SP targeted districts with “high density of Muslim poor”. 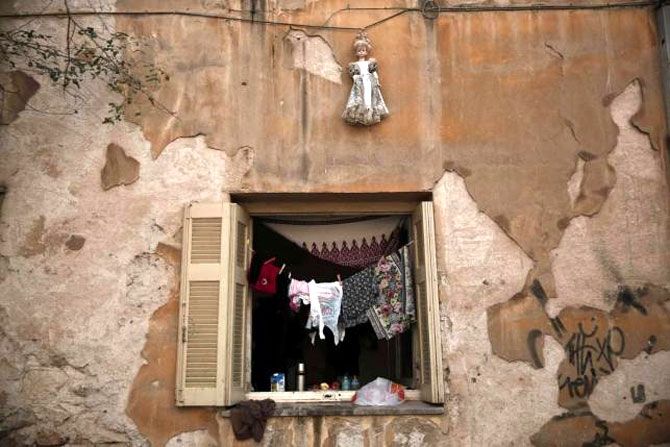 This is what a visit to Kalindi Vihar, an MKSGAY colony in the city of Agra, revealed, confirming an audit report of substandard construction.

“…in case of execution of work under Manyavar Shri Kanshiram Ji Shahari Garib Avas Yojna, 35.41 per cent of samples (collected up to October 2009) were found to be below standard,” said this report from the Comptroller and Auditor General India.

This recent Scroll account said electricity had been cut off to people living in MKSGAY homes in the state capital, Lucknow.

In Kalindi Vihar, on Agra’s eastern fringes, things were much better when about 1,500 poor families were given free homes in 2010, residents said. There was periodic maintenance and visits by officials during the tenure of “Behenji”, or elder sister, as BSP chief and former chief minister Mayawati is referred to.

With the change in government, maintenance stopped and the substandard infrastructure began to crumble, residents said.

Sewage is the worst problem, with broken, clogged pipes and drains and choked septic tanks, which are inaccessible because they were built under the narrow space between buildings.

Worst hit are the people living in ground-floor apartments. These homes have been mostly given to the physically disabled, who find it doubly difficult to deal with plumbing and sanitation issues.

Many defecate in the open.

“We can, somehow, manage but our children can’t stay here with families,” said Sheela, who goes by one name. “How can my daughter-in-law manage without a latrine in the house and defecate in open? So, they have to rent homes somewhere else.”

Another resident, Sheikh Mohammad said, “With such unsanitary conditions, our expenses are compounded with all the health problems that we face.”

Pipes from an overhead water tank are blocked, so residents must buy water from tankers. Shops built to sell subsidised food rations are closed, and the old and physically disabled must travel 1-2 km to the nearest ration store. The colony’s outer-city location makes commuting difficult for its residents, most of whom work on daily wages.

Yet, Kalindi Vihar is a beacon of aspiration for those who didn’t get a home here.

Mohammed Farooque Qureshi applied for a home before 2010, but did not get it in the draw. He talked longingly about Kalindi Vihar’s empty houses. “There are many homes that are unfinished in the nearby blocks or are unoccupied, but I still have to manage without one,” he said. 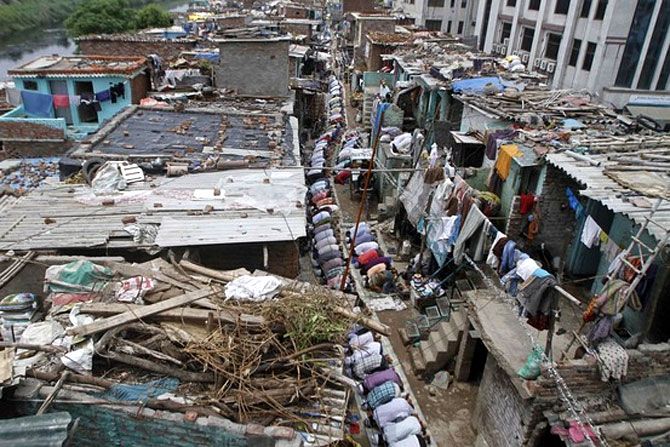 The need for housing in one of India’s poorest states

With nearly a million identified slums (999,091 to be precise), UP urgently requires housing for the poor.

In the government’s own view, “Adequate housing is one of the effective means to alleviate poverty because shelter is usually the most expensive item for the households.”

The state is number four nationally in slum population: more than 6 million people – about a quarter are from scheduled castes – in 293 towns, according to this census abstract.

Without these facilities, health suffers and living standards fall, increasing their cost of living and keeping them in poverty. The literacy rate in UP’s slums is fourth-lowest in India, and the work participation rate third-lowest.

“Non-affordability of housing by economically weaker sections of society and low income families in urban areas is directly linked with the magnitude of urban poverty,” said the National Urban Housing and Habitat Policy 2007. 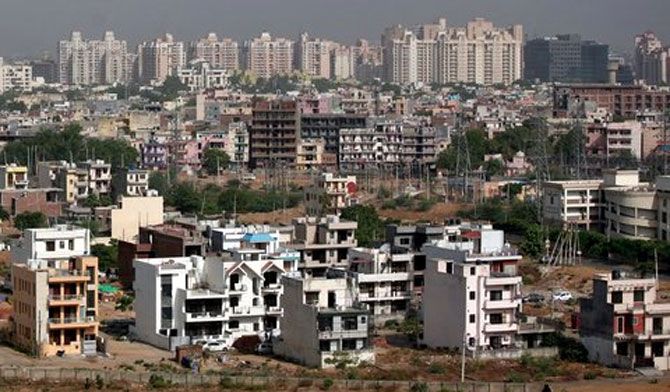 About 15 km to the south of Kalindi Vihar, is Taj Nagari Phase-II, where a similar project was launched in 2008 by the BSP government for the urban poor, this time with assistance from New Delhi under the Jawaharlal Nehru Urban Renewal Mission.

On a recent visit, this correspondent found Shabana Khan, wife of the only owner of a home in Taj Nagari-Phase II. There are 608 flats in this ghost colony, but seven years after construction started, only one family – the Khans – were present.

The Khans, who applied for a house four years ago, do not actually live in their home–they have not been given a key.

A mother of four, Shabana - her husband Azam Khan sells biryani from a cart - cried as she talked of the failed attempts to get the key to their house, as the landlord at their rented accommodation pressures them to vacate.

“We have been changing homes every three or four months for the past few years,” she said. “How do we move so much stuff, every time?” 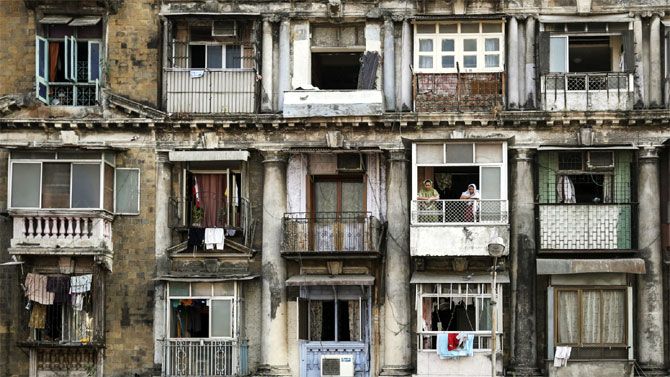 The result: no political dividends

Most schemes aimed at ameliorating urban poverty through affordable housing aim to do so by subsidising housing finance. MKSGAY gave free houses, even though this central government document said in 2009: “Housing should not be provided free to the beneficiaries by the state government. A minimum of 12 per cent beneficiary contribution should be stipulated, which in the case of (scheduled caste/scheduled tribe/backward caste/other backward castes/physically handicapped) and other weaker sections, shall be 10 per cent.”

Despite its infirmities, the MKSGAY is regarded nationally as among the more successful housing programmes for low-income groups and economically-weaker sections – the BJP’s nationwide housing policy is targeted at the same income groups–through subsidised financing. For instance, there were only 8,734 beneficiaries  from nine states, under the centrally-sponsored Interest Subsidy for Housing the Urban Poor scheme, mainly because financial institutions do not like to provide loans to the poor.

The MKSGAY delivered no political dividends to BSP in 2012 elections. Half of all eligible respondents had not heard of it, according to the Uttar Pradesh Post-Poll 2012 Survey Findings by Lokniti, a research organisation. Of those who had, only 23.4 per cent reported housing benefits.

Sumit Chaturvedi is an independent journalist and a blogger at opiniontandoor.blogspot.com