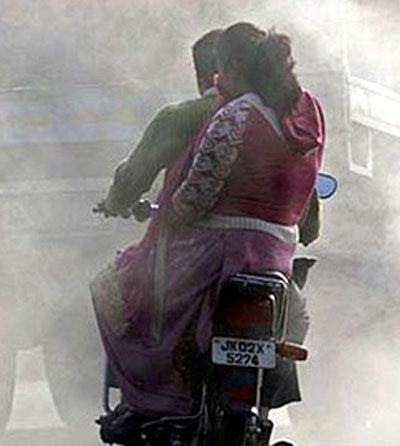 For the first time ever, the year 2014 saw India’s carbon dioxide emissions growth accounting for the largest share of global emissions growth, according to a new global report. India’s CO2 emissions from energy use had increased by 8.1 per cent during the year, making it the world’s fastest-growing major polluter.

It was the single-most significant trend revealed in the latest edition of British Petroleum’s comprehensive Statistical Review of World Energy, but the Indian media got the story upside down. Most coverage celebrated India’s sky-high energy-consumption figures, while glossing over its record-breaking emissions growth, a historical milestone with serious implications.

India’s contribution amounted to 28 per cent, or almost a third of global emissions growth in 2014. That number alone does not convey the magnitude of the larger shift it reflects. Consider these supplementary facts: 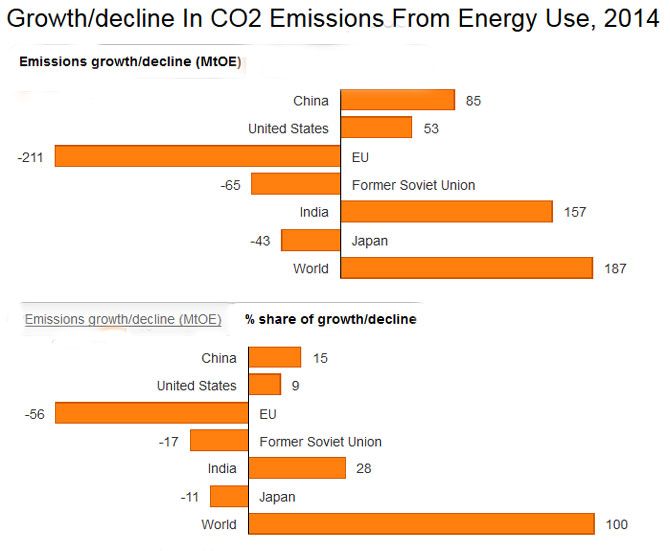 Trends are reversible, but the pattern that emerges from these numbers clearly point to a pivotal shift. India has bucked a global trend to emerge as the single-most critical player when it comes to carbon emissions, and thereby, climate change.

On the other hand, economic growth has slowed globally, leading to a steady decline in global energy consumption in recent years, reaching its nadir in 2014 at just 0.9% (the slowest rate of growth since the late 1990s).

India stays at odds with the world because of a host of supplementary trends: globally-significant emission cuts by the EU, a major Chinese push in renewables, and the “virtual collapse” of highly-polluting industries like coal, steel and cement in China as its infrastructure boom plateaus.

It is in coal consumption that India most diverges from the rest of the world.

When most major countries have minimal or declining coal consumption, India’s coal consumption has grown by 11 per cent, the world’s largest volumetric increase for the year.

Coal is the single biggest source of primary energy in India and China, but from the perspective of climate change and air pollution, it is also the dirtiest. Comparing growth in coal consumption with that of renewable energy gives us a better idea of how India fares against the rest of the world in terms of current energy priorities: 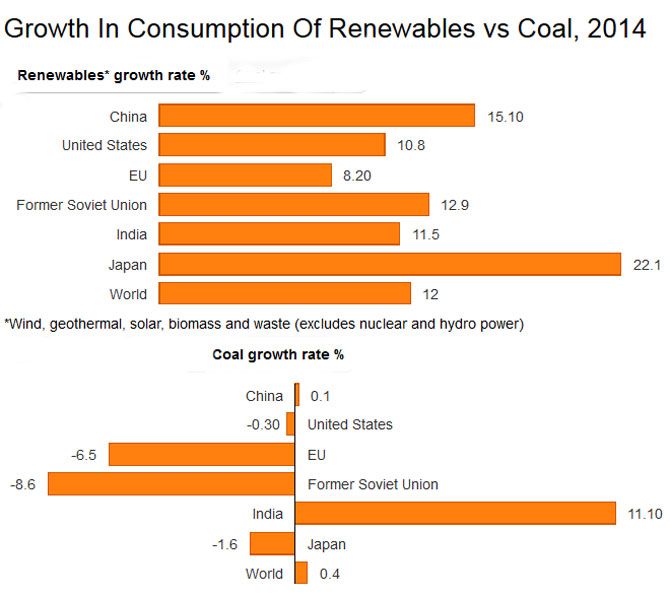 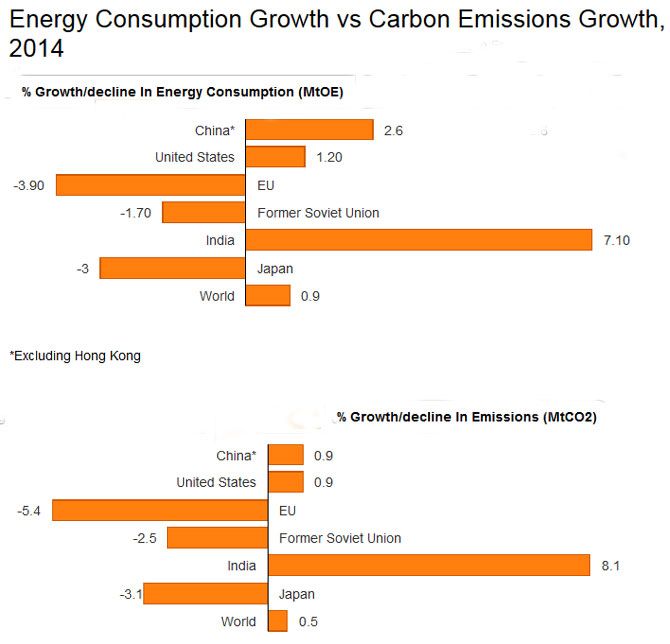 The Modi government is pursuing one of the most ambitious renewable-energy programmes anywhere in the world, apart from a clutch of energy-conservation schemes. However, as an IndiaSpend report noted earlier, coal remains at the heart of Indian energy policy, with 455 of 1,199 new coal-based thermal power plants proposed worldwide set to come up in India. An IndiaSpend series on energy also explained why this is unlikely to change soon.

As the IndiaSpend series showed, it’s only when you apply criteria like population and historical emissions that you get an accurate picture of energy consumption and emissions by countries. But country-wise estimates themselves can be misleading in a globalised economy—where rich nations routinely ‘outsource’ emissions to developing nations.

But India’s size, and the consistent rise in its emissions growth puts India in a league of its own. This trend is unlikely to abate since projections show India is set to grow faster than any other major economy, propelled by a massive, coal-fuelled, Chinese-style industrialisation drive.

India taking over from China

The last five years’ data reveals declining Chinese emissions growth (after peaking in 2011 at 7.9 per cent), and accelerating Indian emissions growth. Energy, economic growth and emissions being connected, what we are seeing is the baton being exchanged from one Asian giant to the other, a shift tangentially reflected in recent GDP trends.

The cumulative impact of every ton of carbon, experts say, added to the atmosphere pushes the world that much closer to the brink of irreversible climate change. For largely tropical countries like India, with its huge coastal populations, rainfall-dependent agriculture and glacier-dependent freshwater supply, climate change poses a disproportionately graver threat.

This is what makes these latest numbers so alarming–for the world, but even more so for India.

Sajai Jose is a freelance media professional based in Bangalore