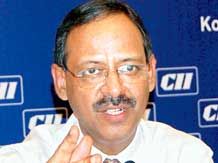 Unlike the work station of a typical bureaucrat that is cluttered with piles of paper, Anil Swarup’s office is spic and span.

The first thing that strikes a visitor to his office in the ministry of coal is the transparent glass table top with a few files on it.

Apt perhaps, because 'transparent' is a word that regularly crops up in any conversation with him about coal auctions.

The secretary of the coal ministry is known for his paperless style of working.

The man behind the online monitoring of key projects in several ministries, Swarup spearheaded the first ever e-auction of coal in India these past few weeks.

Around five months ago, he joined the ministry of coal after the Supreme Court cancelled the 204 coal block allocations made over two decades.

Already bearing the brunt of the coal scam, the ministry had the gigantic task ahead of re-allocating mines in addition to the burden of regaining the trust of India Inc.

The coal ministry may have partially redeemed itself, having successfully auctioned around 40 mines.

In the process, it received bids of Rs 2.35 lakh crore (Rs 2.35 trillion) -- more than the loss estimated by the Comptroller and Auditor General of India to have occurred in the last coal allocation.

This is when 164 blocks are yet to be re-allocated.

The two phases of the auction saw sector majors putting in aggressive bids to get control of coal blocks.

Swarup has humbly attributed the success of the sales to the transparent e-auction process.

The auction was designed and conducted by MSTC on its auction portal.

Swarup regularly gave updates on the auction on Twitter.

One sector website even posted a blog calling him “a babu who tweets at midnight about coal auction”.

This may not be far from the truth because Swarup, along with his colleagues in the ministry, has been burning the midnight oil to complete the successful re-allocation of mines before the end of the 2014-15 fiscal.

But then hard work comes naturally to him, an attribute recognised by the government.

He has headed some key government projects, including the project monitoring group under the Cabinet Secretariat whose task was to remove the road blocks for stalled projects across the country.

Before that he was director general of labour welfare in the labour ministry.

The Indian Administrative officer of the Uttar Pradesh cadre (1981 batch) has been considered a change agent in all the departments he has worked in. His colleagues respect him for his light-hearted approach and keen interest in details.

A senior coal ministry official was heard telling reporters, “Have you seen a secretary like this?

"The smile on his face doesn’t fade even under the most tense circumstances. He talks so excitedly about the auction. This is what drives the whole staff here in the coal ministry.”

Whether at a press conference or in an internal meeting, Swarup is famous for his quips.

He likes meeting people and having long discussions, and often confesses at media meets that he wouldn’t hold back any information of public interest were it not for the restrictions placed on him by his post.

Some people complain about his garrulous nature -- mostly journalists looking for an exclusive -- but during the coal auction, Swarup had a piece of advice for news hunters: with those who deal with people who speak a lot, the trick is to ask the right question.

Confronted by questions on the coal ordinance, the new auction proceedings, even the bids that the private companies have submitted, Swarup needed to be ever prepared, especially in a ministry that is still struggling with charges of scams and espionage.

Amid all this, Swarup has walked the talk.

His integrity and workaholic inclination are slowly but steadily having a rub-off effect on the ministry.

In Swarup’s words -- this is just the beginning.