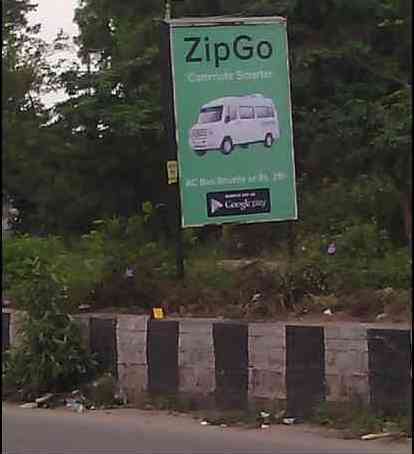 When the odds turned against car users in Delhi, some swapped their cars with friends and neighbours, while others turned to public transport.

And, where metro and DTC buses couldn’t reach, young entrepreneurs did.

They offered people almost half a dozen newer ways of travelling to and from work.

Most of these new initiatives were launched before the 15-day rule, indicating a larger shift towards changed commuting preferences across major cities. The compelling factors for these are traffic congestion and the stress of driving.

There are shuttle bus services, auto and motorcycle aggregators, ride sharing and all women bus services, beside cab aggregators which are mobile app-based and increasingly becoming popular with commuters.

“These ventures have come up not because the government is promoting them but the mindset is changing.

The newest concept is motorcycle taxis.

In flashy yellow jackets and helmets, bikers wait outside metro stations in Gurgaon to take passengers.

The idea is to provide last-mile connectivity. Bike taxi services like MTaxi, Baxi and Bikxie are now available in Gurgaon.

Arunabh Madhur, chief executive officer of Ace Fenders Travels, the company that launched MTaxi in December 2015, says 75 per cent of private vehicles on roads are two-wheelers in the Delhi region.

Many of these riders could shift to bike taxis because they are about 40 per cent cheaper than three-wheelers.

“We follow a marketplace model where a bike owner attaches with us and we help them get a taxi registration. We have 25 bikes but we plan to take the number to 300 by March-end.

We will soon provide services at five Gurgaon metro stations and are also trying to launch a service in Delhi.”

While safety is a concern among many who may not want to hitch a ride on motorcycle, taxi aggregators, too, are finding competition.

Arun Bhati, founder and chief operating officer, Orahi, says, “We do not believe in taxis because they increase the number of cars on roads.

"Delhi, for instance, has 54 lakh (5.4 million) private cars and there are about 60 lakh office goers. If they share rides, it takes care of the problem.”

A postgraduate from IIM Calcutta, who has also led sales and operations for Ericsson’s Industry & Society unit, Bhati and Ericsson colleague Sameer Khanna founded the ride sharing company in 2013.

Seventy per cent of traffic in Delhi region is home-to-office and back.

“In developed countries, people are moving towards access rather than ownership. In 2014, more people got access to cars in Germany than ownership,” says Bhati.

Orahi, that operates in Delhi, Gurgaon, Mumbai, Chennai and Hyderabad, is planning to launch its services in Bengaluru too.

Unlike car pooling, where a person is stuck with a group, ride sharing gives flexibility.

All a person needs to do is to give his requirement and the system gives verified options of persons staying in the neighbourhood and working close to his or her office.

The Delhi government's odd-even scheme saw Orahi’s registration go up to 45,000 and usage increase by 250 per cent.

Orahi chose Gurgaon-centric operations because there are some 3.5 lakh people working in one-square kilometre area here.

ZipGo started a women-only bus service in Delhi region last month. “Here, we realised that availability was not the only issue, safety and security was also a big concern,” says Kajal Dubey, business head, ZipGo.