The headline must have made you wonder how this article belongs to a personal finance page. This article is not about the difference in work-life balance of public-sector professionals and their private sector counterparts and the impact thereof on wives and family life. 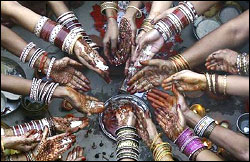 There is a general perception that public sector banks treat their "wives" better as compared to their private sector counterparts. The perception probably arises from the fact that since a majority is owned by the government in PSU banks, there is nobody personally gaining from treating "wives" shabbily. Unfortunately, this is just that  a perception far removed from the reality. The public-sector "husbands" are just as bad as their private sector counterparts insofar as the treatment of "wives" is concerned.

Take the example of this large public sector bank. Depending on the date of marriage (date of taking the loan) the difference can be as much as two per cent a year. Clearly, the older the marriage, the worse off you are. There is difference in interest rates paid by old wives as compared to what a newlywed has to pay (see table).

So, as you can see, even in a PSU Bank, the "oldest wife" pays a penalty of a whopping two per cent a year, compared with a "newly wed". In fact, the latest "wife" who took the loan just two months ago feels most cheated because she is paying a penalty of a "massive" 0.50 per cent a year as soon as she enters the kitchen.

This has been true of every public sector bank in last 29 months since the base-rate mechanism was ushered in by RBI. Let me hasten to add that private sector counterparts as well as the housing finance companies don't treat their "wives" any better.

RBI had introduced the base-rate mechanism with effect from July 1, 2010, to take care of this problem, but it has clearly failed to address the issue. There has been a small positive step taken by RBI.

Earlier, if an aware "wife" decided to switch "husbands" (pre-pay her loan and shift to another lender), she had to pay pre-payment charges to her current "husband". This was adding insult to injury. At least RBI has ensured that the existing "husbands" will no longer be able to charge pre-payment charges. Hence, at least the more aware "wives" can be assured of a better deal.

But, the regulator cannot wash his hands off the issue by just making the divorce cost less. They must ensure all "wives" get treated equally, whether or not the "wives" are aware of this. Meanwhile, the only thing that you can do if you are a "wife" (i.e. you have a floating-rate home loan) is to take a divorce from your lender and move to another as soon as he starts treating you like an old "wife".

To rephrase a famous saying, "wives of this world unite - you have nothing to lose but your chains".

The writer is CEO, apnapaisa.com