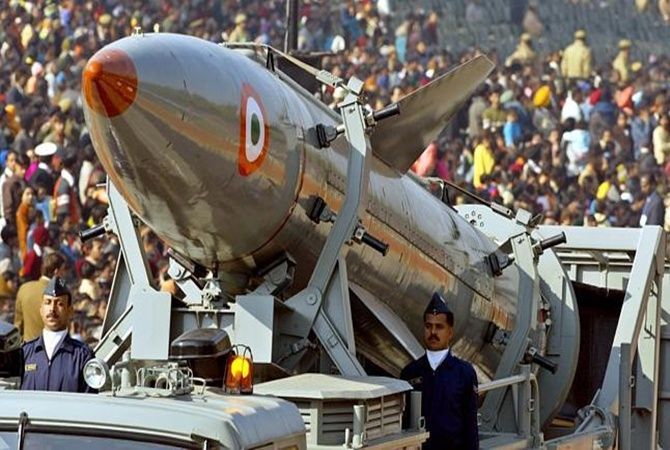 IMAGE: The Defence Acquisition Council has failed to clear a new policy for nominating private companies as strategic partners for building major weapons platforms for the military.
Photograph: Reuters.

Earlier this month, a meeting of the defence ministry's top procurement body, the Defence Acquisition Council, or DAC, failed to clear a new policy for nominating private companies as strategic partners, or SPs, for building major weapons platforms for the military. This is expected to come up before the DAC again, with some changes.

The contours of the new policy had been spelt out to chief executive officers of private defence firms, who were briefed by the ministry.

Under the new policy, six Indian private firms that met stipulated financial and technical criteria would be selected as SPs -- described as "'system of systems integrators' that would set up a widespread industrial eco-system encompassing development partners, specialised vendors and suppliers, especially those from the micro, small and medium enterprises sector".

Chosen SPs would be expected to establish joint ventures with global original equipment manufacturers shortlisted by the ministry.

After competitive bidding, one JV would be chosen for each of the four categories: single-engine fighters, helicopters, submarines and armoured vehicles.

The policy was to form a part of the Defence Procurement Procedure of 2016, but that was eventually issued last June without the chapter on SPs.

Meanwhile, badly needed acquisitions, such as single-engine fighter aircraft for the air force and submarines with air-independent propulsion for the navy, languished without an SP policy to select Indian vendors that would build these platforms locally.

In 2014, the Bharatiya Janata Party's election manifesto promised that India would 'harness its skilled human resources and technical talent to emerge as a global platform for defence hardware and software production.'

Private sector partnership was to be the key in achieving this goal.

In February 2015, while inaugurating the Aero India 2015 exposition in Bengaluru, Modi described defence manufacture as 'the heart of our Make in India programme.'

Elaborating on its potential for job creation, Modi said: 'Even a 20 to 25 per cent reduction in imports could directly create an additional 100,000 to 120,000 highly skilled jobs in India. If we could raise the percentage of domestic procurement from 40 per cent to 70 per cent in the next five years, we would double the output in our defence industry.'

Yet, for the next two years, the government took only baby steps towards this end.

The cap on foreign direct investment in defence was eased from 26 to 49 per cent.

Even so, private industry has waited impatiently for a Big Bang manufacturing reform that would bring it on a par with the privileged defence public sector undertakings (DPSUs) and ordnance factories (OFs). That is why many welcome the SP policy, conceived in 2015 by the Dhirendra Singh Committee.

In 2016, a follow-up task force led by former Defence R&D Organisation chief VK Aatre recommended the financial and technical benchmarks that Indian firms must meet to be nominated as SPs. It was envisaged that one SP each would build aircraft, helicopters, aero engines, guns, submarines, warships and armoured vehicles; while two SPs each would manufacture metallic material and alloys; non-metallic materials; and ammunition, including smart munitions. The SP policy being finally issued envisages just four technology realms.

The idea of empowering private companies goes back to 2005, when the Vijay Kelkar Committee conceptualised the "Make" procedure. This envisaged Indian private and public firms designing complex weaponry, with the defence ministry reimbursing 80 per cent of the cost and assuring manufacturing orders for products that met the military's requirements.

However, trade unions of DPSUs and OFs pressed then defence minister AK Antony to scuttle the concept, fearing that RuRs would put them out of business. Smaller defence companies also objected, worrying that RuRs would corner the market, leaving little for them.

Although the RuR concept never took off, the "Make" procedure remains a category in the Defence Procurement Procedure (DPP). Two "Make" category acquisitions are currently under way: the Tactical Communications System, and the Battlefield Management System, with a third being evaluated to build a Future Infantry Combat Vehicle.

The "Make" category accords major responsibility to the defence ministry, which would have to create a methodology for assessing cost-plus pricing, since it must accurately assess and reimburse design cost claims of vendors.

Another alternative for the private sector is the "Buy & Make (India)" category of procurement, which was promulgated in DPP-2011. This requires Indian vendors to partner foreign OEMs of their choice in bidding to build proven military platforms and which meet defence ministry specifications.

Instead of choosing one/two SPs for each segment, as proposed by the Aatre Task Force, the ministry will choose six SPs to compete in multiple segments. When one SP wins a contract, it would be eliminated from further tendering, since the SP policy restricts each company to a single segment. This would scuttle an OEM's bid the moment its SP partner is selected in another segment.

For example, if Lockheed Martin partners L&T to build single-engine fighters, their JV would stand nullified if L&T won a tender to build armoured vehicles.

In fact, competitive bidding by SPs was never envisaged, in the form that it is in the "Buy", "Make" and "Buy & Make (India)" categories.

The Aatre Task Force report, quoting the Dhirendra Singh Committee, states: "Whenever the vendor base is large and competition is feasible, the competitive bidding process must be followed. There are cases, however, where certain platforms are of strategic importance. For these, we are recommending the strategic partnership model for creating capacity in the private sector on a long-term basis. Such a capacity will be created over and above the capacity and infrastructure which exists in public sector units."

Private firm executives also complain the government is taking on too much by nominating the SPs as well as foreign OEMs. Given there would be just two or three OEMs and an equivalent number of SPs in the fray, the latter complain they would have little negotiating leverage.

This lack of negotiating leverage would play out in other ways too.

An Indian CEO cites the 49 per cent FDI cap on OEMs to argue that an Indian vendor would carry 51 per cent of the risk, while an OEM -- which would supply most of the technology -- would control 85 per cent of the cost. Since the OEM would extract his technology cost through a transfer pricing mechanism, the SP would be left with little financial benefit, but a majority share of the risk.

"In a 'Buy & Make (Indian)' category acquisition, the Indian partner decides the foreign partner, and effectively negotiates the price. In the SP policy, the Indian partner is reduced to being the assembly house of a foreign OEM", says an Indian defence CEO.

Furthermore, few Indian defence companies have the technological savvy to negotiate on comparable terms with high-tech OEMs. This is especially true of new entrants like Reliance Anil Dhirubhai Ambani Group and Adani Group, which have so far demonstrated no defence technology capability.

Given that, selecting these firms as SPs would be fraught with risk for decision-makers, given their perceived proximity to the ruling party.

Indian companies like L&T and Tata Power (SED), which have developed genuine technological capability in defence, worry that foreign OEMs would prefer Indian SPs with lesser technological capability, upon whom the foreign partner could impose terms. Without the capability to demand a greater share of manufacture or to absorb technology to capture the maintenance, repair, spares, overhaul and upgrade market, a weak SP would allow the OEM to defeat every aim of indigenisation.

Additionally, there are apprehensions even within the ministry that companies without strong defence technology capabilities might prefer to leverage their SP status into lucrative land grants, defence technology enclaves, low-cost bank loans and initial public offerings, rather than risk foraying into defence manufacture.

Nor does the SP policy provide for penalties for defaults and delays in projects, which some private Indian companies are well known for.