Remembering Amar Bose: The label 'Great Man' fits him to a T 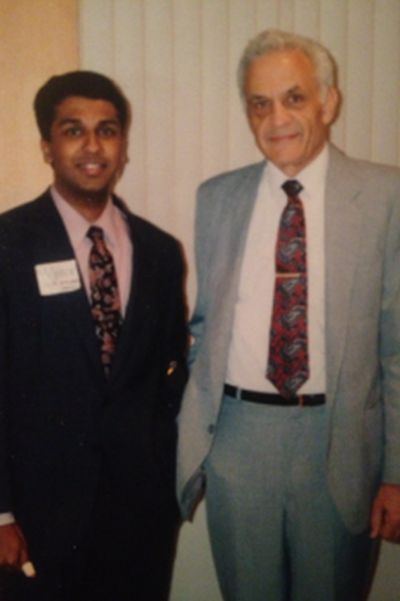 Sree Sreenivasan recalls his encounters with the pioneer of sound who passed away on Friday and gives a sense of how many lives he touched -- in big and small ways.

There are two globally-recognised names that I have, over the years, enjoyed revealing to know-it-all Americans as having India roots.

One is Freddie Mercury, the lead singer of Queen and one of most popular rockers of all time. I have to explain his Parsi/Zoroastrian background and his growing up in Mumbai. And that he changed his name from Farookh Bulsara to fit in better in Britain.

The other name has not been changed, but it changed the world.

That name, of course, is Bose, the speaker company, whose founder, Amar Bose, died on Friday at 83. Many people think the name is German, perhaps confusing it for another big electronics company, Bosch -- or presume it’s something else. Arlene, a Facebook friend, wrote on my wall: ‘I had no idea that he was Indian. I thought Bose was a manufactured name, like Kodak.’ Americans have no reason to know that Bose is a very common Bengali last name.

This Philadelphia-born son of an exile from India’s struggle for Independence and an American mother was a classy gentleman who built world-class -- and world-beating -- products.

I had the honour of meeting him a couple of times and I left each meeting inspired in so many ways. I’ve been running, for months, a series on Facebook and Twitter, I call #LifeHighlight and meeting Amar Bose was a #LifeHighlight.

The first time was in 1994, when I was on assignment for NDTV and its flagship show, The World This Week. I was asked by Prannoy and Radhika Roy to profile a couple of prominent Indian Americans in the Boston area. Both happened to have Bengal connections: Amar Bose and economist Amartya Sen (which pleased my Bangladeshi-American cameraman, Masbaul Talukder).

When Sen won the Nobel four years later, the footage of me walking Harvard’s campus with him was run repeatedly on NDTV. I hear our Bose footage is already getting similar treatment.

As we drove up Mountain Road (more like a hill, actually) in Framingham, Massachusetts, we saw a building with a single word on it: ‘Bose.’ I still remember the feelings of pride and awe at seeing this Indian name and what it represented.

In front of the building were displayed 10 luxury cars which carried Bose speakers. They were German, Japanese and American household names carrying an Indian name.

The crew (there was a second Bangladeshi-American with us) and I spent six hours that day at Bose HQ -- three of them with Amar Bose.

We had a sit-down interview in his office, where he talked about his life’s work, his passion for audio and his father’s efforts to rid India of the British (the elder Bose had escaped from prison and made his way to New York and then worked for the cause from afar).

He then took us on a tour of the complex and keeping up with this tall, skinny man -- his hours of badminton each week kept him in great shape -- was nearly impossible. He showed off the latest gadgets and spoke in great detail about the science behind the products.

Several mock living rooms and other settings were spread throughout the building to highlight the quality and placement of the speakers.

He took us into a locked-down testing room where thousands of speakers were playing at full volume for years on end. We had to waive liability and wear huge noise-cancelling headsets to step in that room. If the headphones fell off, we’d be instantly knocked out. While the roar of the speakers was mostly muffled by the headphones, the sound waves were a physical assault on our bodies.

Growing up with mixed parentage in 1930s Philadelphia, the locals didn’t know what to make of him. He reminded us that this was a time when there were almost no Indians on the East Coast and he spoke about racist comments he endured and being called the “N-word” on occasion. Many years later, on a visit to India, he was particularly upset to see Indians showing subtle -- and not-so-subtle -- racism when it came to African students.

The last part of the tour were those luxury cars parked outside the complex. Each of the 10 cars was a different model featuring Bose speakers. It was the first time I’d seen some of those cars up close, let alone sat in the driver’s seat as Amar Bose fiddled with the audio systems next to me. At one point, we wanted a shot of Bose driving away in a car I would never be able to own. So he got in the driver’s seat and, with the camera rolling, I shut the door. But because it was an unfamiliar design, I managed to slam the door on my thumb and screamed in horror.

I thought I’d lost my thumb, but Bose calmly examined the wound and the accumulating blood and walked  me over to the nurses station. He and the crew continued to get some footage while I was tended to by the nurse and downed strong pills. I eventually lost most of my nail, but that day, was able to rejoin Bose and we even took the photo you see here, with my bandaged thumb.

The second time I met Bose was in 1996, when he made a rare trip to New York City, to accept an award from the Taraknath Das Foundation (my wife, Roopa Unnikrishnan, is on the board now, but wasn’t even in the country then). The story of how he decided to accept an award, and its connection to his father, is told below by Leonard Gordon, director of the foundation.

I’ve been collecting tributes to Bose via email, Twitter, and Facebook, and some of the comments below give you a sense of how many lives he touched -- in big and small ways.

This is Jagdish Bhagwati, University Professor at ColumbiaUniversity:

"At a time when Indians were already making waves in all walks of life, there were no great successes yet in innovation that would put Indians at the top. Amar Bose filled the void and was a true pioneer in that regard. What a great Indian and indeed a genius worthy of adulation everywhere."

Here’s Dinesh Paliwal, Chairman and CEO of Harman International, another multi-billion audio company with big brands of its own, including Harman Kardon, JBL, Infinity and AKG. Paliwal and I had discussed Bose and his legacy just a couple of months ago at Harman HQ in Connecticut. I was struck by the parallels in their stories, including the fact that Agra-born Paliwal’s father had been deeply involved in India’s freedom struggle.

“With Dr Bose's passing away, we have lost the industry's most prolific champion whose contribution and influence are beyond measurement! His absence will create a big vacuum which is not easy to fill. In my personal and professional capacity, I submit my highest admiration and respect to you now and forever. Long live your legacy and long live your determination to innovate!”

Here’s Shashi Tharoor, India’s minister of state for human resource development and a former New York resident when he was the senior-most Indian in the United Nations.

“The first Indian name to become a household word in America was Bose -- a name soon associated with quality, elegance, fidelity and style, virtues not commonly thought of as Indian.  In creating that aura around his name lies Amar Bose's first and most enduring contribution to the community that remains so proud of him."

Amal Naj, who spent 17 years as a Wall Street Journal reporter, is the CEO of Berlin Pharmaceutical and Paradigm Pharma, based in Bangkok:

“He was one of the most humble and simple men I have met among the many successful entrepreneurs and business executives. He took the bus where he could have easily afforded a stretch limo, as he did when he came to New York to receive the Taraknath Das award. He spoke of his innovations so simply as if a child could have invented them with just pure curiosity.

“While his genius as acoustic engineer will continue to be "heard" for ever in the way music reaches our ear, perhaps little is known outside his company how he also valued the human mind in his employees over structured management styles, which he wasn't fond of because he believed they suppressed innovative thinking. He wanted even the production and assembly staff to apply their thinking like an inventor to every task they engaged in so the mind was constantly employed as opposed to the body alone. He eagerly recruited people who had been retired because of age; what a waste of mind when it was at its peak of knowledge and experience, he said, and was happy to have it in his company. He saw every employee of the company as he was -- an inventor, or at least an innovator. That was his basic response when I asked him how as an inventor he so successfully managed his expanding, far-flung business in a highly competitive market.”

“Through two generations this is a wonderful rags to riches and success story. As Amar Bose told us when he accepted an award from the Taraknath Das Foundation a few years ago, his father, Noni Bose, came to Ellis Island in New York from India around 1920. He had nothing. He knew no one but knew the name of Taraknath Das. He was enabled to call Das on the telephone and hearing from a Bengali in trouble, Das came down to Ellis Island, saw only one Indian there and assumed it was Bose. Das said Bose was his cousin and that he had a place for him at Columbia University, and got him into the country. He did not know Bose, he was not his cousin, and he had no place for him but he helped him.

“Later Das helped Bose to set up a small business in or near Philadelphia. Bose worked hard and was able to send his son Amar to MIT. Amar Bose studied acoustical engineering and began teaching at MIT. He also played, I think, the violin. Hearing some speakers on a hi-fi, he said he could make better ones and he did. But he had no money to finance their production. MIT would not back him. A Chinese professor at MIT gave him his money, Bose used what he had, and made the first Bose speakers. His business flourished and became a multibillion dollar one and continues to flourish.

“When Bose came to New York, he told the story of his father's entry into America and then later answered questions for more than an hour. We were all happy that he pulled our invitation letter out of his secretary's waste basket, because he saw ‘Taraknath Das Foundation’ on the letterhead. We enjoyed our moments with him and found him a warm and gracious awardee whom we were pleased to have met. His success as an inventor and entrepreneur show what is possible, at least for some, in America.”

“I didn’t know Bose was a US company or one with an Indian-American founder. For some odd reason I thought the company was Scandinavian. My only experience with Bose products made a huge difference in my music life!  After endless attempts over many years of trying to get decent headphones that stay in my ears, I tried Bose and they are sublime.

RIP, Amar Bose. “Great man” is a much-overused label these days. But it fits you perfectly.

Image: The author with Amar Bose at Bose HQ in 1994. The bandaged thumb is part of the story.