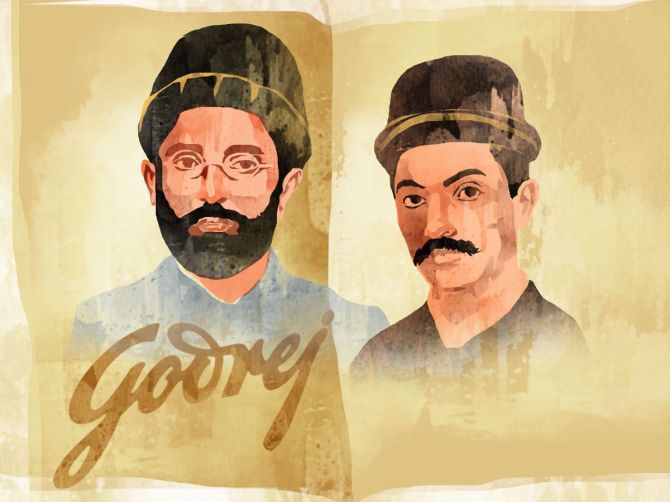 IMAGE: The comic book is all about its founders, Ardeshir and his brother Pirojsha, who were instrumental in establishing the Godrej empire. Illustration: Dominic Xavier/Rediff.com

It is not the first time the history of the Godrej family is being written.

In its centenary year in 1997, film journalist and former editor of Filmfare and Screen B K Karanjia had, at the behest of the industrial family, penned a voluminous two-part history, tracing their trials and tribulations since 1897.

So, what made the family want to tell its story again 25 years later? And not through another book, but through a completely different medium?

The answer comes from none other than Jamshyd N Godrej, the 73-year-old chairman and managing director of Godrej & Boyce — the first company in the group’s fold, which made the ballot boxes for the country’s first election after Independence in 1952 in Vikhroli and thereon kept evolving to keep pace with changing times.

“We were looking at how we could reach children and young adults so that we could share the Godrej story, because they have not been associated so much with the brand,” he says.

And the medium they finally chose? “A comic book, where you can use narrative writing and tell a story with illustrations, was a great way to go.

"We thought it is a very effective way to reach a new generation,” says Godrej.

Godrej, of course, went to the best in the country to do so: Amar Chitra Katha (ACK), the publishing king of comics and graphic novels, which has inspired millions of children to get familiar with Indian history and mythology through crispy, well-illustrated comics.

For ACK, it was an area they have dabbled in earlier as well, having published comic books of other industrial luminaries like Jamsetji Tata, JRD Tata and Ghanshyam Das Birla.

In the case of the Godrej family, the comic book is all about its founders, Ardeshir and his brother Pirojsha, who were instrumental in establishing the empire.

ACK is initially starting with a small print run of 500 copies, but expects bigger numbers to come from its digital version.

The comic book traces the Godrej history through the family’s migration from Bharuch in Gujarat to the bustling city of Mumbai.

And how a small news item in the Bombay Gazette about a gang of burglars breaking locks in the city led Ardeshir Godrej to enter the business of making sturdy locks.

With financial help from his benefactor and family friend, Merwanji Cama — whose nephew, Boyce, after whom the company’s name was changed to Godrej & Boyce, joined Ardeshir but did not work long — and a loan of Rs 80,000, he rented out a shed in Lalbaug, hired a dozen workers from Gujarat and Malabar, bought a small steam engine and started producing locks in 1897.

Learning from his earlier mistakes in business, he put in a clear marketing plan.

The rest is history. From locks, the company diversified to other products, furniture included.

Soon, his younger brother Pirojsha joined him and got a patent for making springless locks.

The next big step was their tryst with soap, starting in 1918 with Chavi, a bathing soap that took on imported giants like Lux, Cuticura and Windsor.

After Ardeshir passed away in 1936, Pirojsha took up the reins of the Godrej business, and went on to build Vikhroli, an industrial township on the outskirts of Mumbai city.

Says Preeti Vyas, CEO, Amar Chitra Katha: “One challenge we faced was the page count — 32 pages are too little to write the stories of two business giants like Ardeshir and Pirojsha.”

The other, she says, “was to be chronologically correct even with the smallest detail, like which brand of soap was introduced first.”

The narrative, says Godrej, was supported by a wealth of archival material from the 1900s, which has been collected, sorted and made available to anyone interested in the Godrej history.

These include letters, agreements, pictures, product history and advertising, and so on.

“The Tatas have the best archives and they understood its value.

"We did collaborate with them while setting up ours,” says Godrej, adding, “We have also helped many Indian business houses like Cipla and the Jindals, who are working on setting up their archives.”

The Godrej group also organises annual, open-to-all lecture series in Mumbai on the contribution of Indian business houses to the India story.

The last one was on the Sassoon family, a name Mumbaikars are familiar with because of the Sassoon Docks.

Is he looking to leverage other mediums so that more people get to know about their founders?

Godrej replies with an emphatic “yes”, and says they are exploring all options: social media, perhaps an OTT series, videos, oral recordings.

The Godrej story, he says, is a slice of Indian modern history and ought to reach more people.