News
Business
Movies
Sports
Cricket
Get Ahead
Money Tips
Shopping
Sign in  |  Create a Rediffmail account
Rediff.com  » Business » Not just Modi, even Manmohan Singh has something to cheer

Not just Modi, even Manmohan Singh has something to cheer

The new IIP numbers should spread cheer among those who were part of the Manmohan Singh-led United Progressive Alliance, earlier accused of having presided over a steady deterioration in industrial performance, particularly in the last two years of its tenure, says A K Bhattacharya. 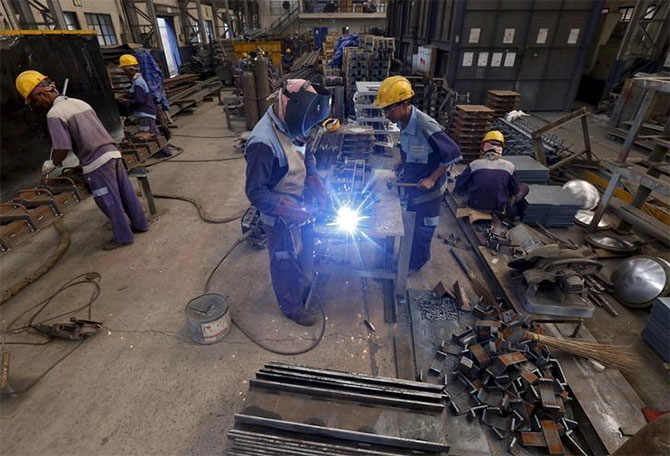 It is not just the Narendra Modi-led National Democratic Alliance (NDA) government that should pat itself on the back after a revision in industrial growth numbers due to a change in the base year for the Index of Industrial Production (IIP).

The new numbers should spread cheer also among those who were part of the Manmohan Singh-led United Progressive Alliance (UPA), earlier accused of having presided over a steady deterioration in industrial performance, particularly in the last two years of its tenure.

More significantly, the average annual industrial growth in the last three financial years of NDA is now estimated at 4.1 per cent, a sharp jump over the none-too-impressive number of just 1.96 per cent computed earlier, and that for a government which promised to revive manufacturing.

But the Manmohan Singh-led UPA seems to have done even better by clocking average annual IIP growth of 3.35 per cent in the last two years of its tenure (2012-13 and 2013-14) compared to the earlier estimate of just 0.5 per cent.

Remember that these were the two years when a so-called paralysis in decision-making and corruption-ridden governance had arguably taken a heavy toll of industrial output.

That narrative now may well be challenged.

According to the earlier base-year estimates, the NDA years saw more than trebling of average annual industrial growth over what UPA achieved in its last two years. But the new base-year numbers show the NDA years' growth going up by just 22 per cent over what the UPA years had achieved.

Such is the power of India's Central Statistics Office (CSO) that on Friday changed the base year of the all-India IIP from 2004-05 to 2011-12 to reflect the changes in the industrial sector and align it with the base years of other macroeconomic indicators like the Gross Domestic Product (GDP) and the Wholesale Price Index (WPI).

While putting out the rosier industrial growth numbers as per the new base year estimates, the CSO, however, has issued some caveats and explanations of the turnaround.

One, it has pointed out that the growth rates of the two series are not strictly comparable as the indices for 2011-12 have been normalised to 100 at a monthly level. However, this does not detract from the overall impression that industrial growth figures for the last five years do look better after the base-year change.

Two, there is an increase in the number of factories whose data are now being reported and captured in the industrial growth data under the 2011-12 base-year series. In addition, the data coming from factories that are closed have been removed, making the new data set more representative and reflective of the current state of affairs.

This could be one of the reasons for the upward revision in the numbers under the new base year.

This is much more than the 22 item groups (including offshore platforms, typewriters, sewing machines, tape recorders, pencils and organic pigments) that were dropped while framing the 2004-05 base-year index.

Presumably, the performance of items that have been dropped was poor and their exclusion has reduced the adverse impact on the overall industrial output performance.

Similarly, 50 new item groups were added to the revised IIP with the latest base year of 2011-12. Specific details of the new item groups are not provided by the CSO, but it can be presumed that these inclusions have helped boost the revised numbers.

However, the CSO’s official explanation suggests that only about 149 items like steroids and hormonal preparations, cement clinkers, medical accessories, prefabricated concrete blocks and refined palm oil have been added.

But clearly there would be more items without which the new number of 809 items in the manufacturing sector does not look feasible.

Increase in weights for manufacturing to 1980-81 level

The weight of the manufacturing sector in the IIP is now raised to 77.63 per cent, compared to 75.5 per cent in the 2004-05 series. This too has helped improve the new base-year series numbers.

The manufacturing sector has seen perhaps the most significant changes in Friday’s base-year revision, the ninth such exercise that began with the first IIP choosing a base year of 1937.

What is also clear from the past 67 years’ exercise of releasing a monthly IIP number is that India’s statisticians have been sharply focused on the manufacturing sector right from IIP’s inception.

Four, the electricity sector in the 2011-12 base-year IIP includes data from renewable energy sources, indicating the growing share of such power generation companies in the Indian economy.

Yet, however, the weight for the electricity has declined in the latest base-year calculations, placing it at 7.99 per cent, down from 10.3 per cent in the 2004-05 base year.

This is the only sector whose weight in the revised index has gone down even though a new category of renewable energy sources has been included in the electricity sector.

How have the new series numbers captured the impact of the demonetisation of 86 per cent of India’s currency on November 8, 2016? At the IIP level, the monthly growth figures from November 2016 onwards show a marginal increase in the new index compared to the growth figures under the old index.

In comparison, the improvements under the new base-year series in months prior to demonetisation were much more pronounced.

This seems to suggest that demonetisation did have some impact on the months of industrial production from November 2016 onwards, captured under the new series. For instance, the 2004-05 series shows industrial output in the April-October 2016 period to have declined by 0.3 per cent. In the post-demonetisation period of November-March 2016-17, it picked up marginally to record growth of a little over two per cent.

The new series continues to include both fresh and frozen buffalo meat in the index, reflecting the statisticians’ belief that this sector would continue to be relevant for data collection and for computing the country’s industrial output.

Frozen buffalo meat was included in the manufacturing sector, for the first time in April 2011 when the base year for the IIP was revised to be 2004-05.

What could the revised IIP numbers mean for GDP? It is widely acknowledged that the IIP numbers are an important input while estimating the GDP.

Given the fact that now the IIP numbers have been revised, it is possible that the GDP numbers too could be revised upwards.

Whether that happens or not is a question mark. But if any revision of GDP data for past years takes place, on the basis of the new IIP series, remember that the benefit of higher growth would be reaped not just by the NDA, but most likely by the UPA as well. 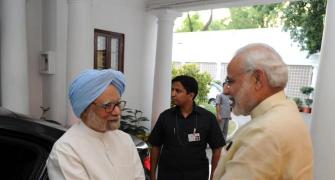 Labour reforms in India may get going, finally 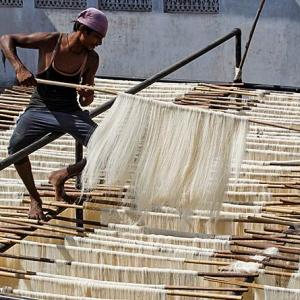