'Through the use of technology, the GSTN will tip the balance in favour of compliance rather than tax evasion, lowering the barriers for entry into the tax payment system while making it much harder to cheat on payments,' says Nandan Nilekani and Viral Shah. 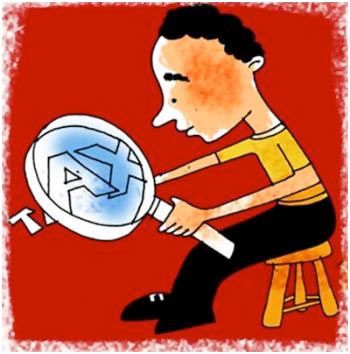 The Goods and Services Tax Network is a new institution created specifically to act as the central technology platform that will implement the GST.

Given that the power to impose and collect taxes is spread across the central and state governments, any attempt to build a centralised technology platform could be seen as a ploy to alter the balance of this power, creating instant opposition.

One way to negate such potential dissent was as simple as choosing the appropriate name for the project. GSTN doesn't exactly make for a catchy acronym, especially for a project that aims to completely transform India's tax landscape.

However, there's more to the name than meets the eye; a neutral term like 'network' doesn't convey a threat, while terms like 'authority', 'India' or 'national' would imply a power shift towards the centre.

'Network' helped us convey our goal of the GSTN being only the plumbing that brought together all the stakeholders in the tax ecosystem, with no participation in any Centre-state power struggles.

From day one, one of the biggest implementation-level concerns with the GST centred around the actual process of revenue collection. It was not clear to the states whether the Centre would collect the revenue and if the Centre would share it with them promptly, or more likely late or never at all.

Fund flows from the Centre to the state have historically been delayed and intermittent, unable to provide much-needed support when state economies are struggling.

It is this history that has led to today's complex taxation system and has left our states deeply suspicious of sharing revenue collection powers with the Centre.

The loss of control over their own revenues was an unattractive proposition and, given that many states have tight finances, any delay in collections could adversely affect their functioning.

To address these concerns, the GSTN has been designed as a non-profit company jointly owned by the central and state governments, with professional management.

By design, the government is not a majority stakeholder, allowing for the company to hire a professional team.

The structure of the GSTN does not disturb the balance of power, and provides much-needed support to both the government and the people; revenue collection departments will find their work simplified through professional technology services and people will avail of a customer-friendly set-up that transforms the adversarial relationship between the taxpayer and the authorities.

It also grants a great deal of flexibility, allowing the organisation to invest in choosing the right people for the task of building a complex, highly scalable technology platform.

The creation of an institution such as the GSTN also solves another thorny issue -- that of the taxation of interstate commerce. A common and neutral body that is jointly controlled by all stakeholders can settle interstate tax claims in a well-defined, timely and taxpayer-friendly manner.

While these decisions gave a sound footing to the fledgling institution, it wouldn't be government without its fair share of petty bureaucratic squabbles.

Nandan strongly recommended that the chairman be drawn from the government, while the CEO be a professional from the private sector; he wryly recalls, 'One of the most heated discussions around implementing such a landmark reform was whether the heads of the organisation ought to be from the Indian Administrative Service or the Indian Revenue Service.' 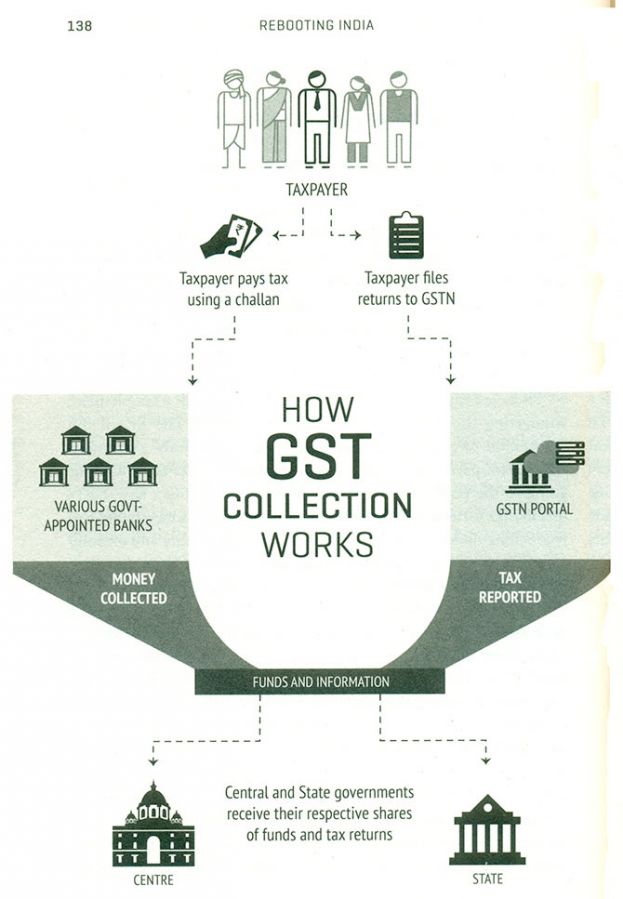 At the heart of the GSTN lies the technology platform that powers the implementation, operation and oversight of the GST.

Coming up with a design for this platform was the mission of a group with another of those catchy government-issued names -- the Empowered Group on IT Infrastructure on GST.

Under Nandan's chairmanship, this group presented a report to the government in September 2010 which outlined the proposed system’s design philosophy, key features and operational goals. It would need a professional, highly experienced team to build a platform capable of processing hundreds of millions of transactions for millions of taxpayers.

One of the main aims of the GSTN is to make life simpler for both the taxpayer and the tax administrative authorities.

As far as the taxpayer is concerned, the filing of tax returns and the payment of taxes should be a simple, uniform process, irrespective of location and the size of the taxpayer's business.

Hence, the GSTN's technology platform should make it easy for the taxpayer to comply with the law without necessitating extra effort on their part.

By implementing a uniform set of policies to be administered across the Centre and individual states, the GSTN will also significantly reduce the costs and administrative machinery required to implement and enforce tax laws.

The transparency conferred by the use of technology will help to plug leaks, eliminate tax fraud and enable easy auditing. Data from this system can be mined and analysed to improve tax collection.

Ultimately, however, the GSTN architecture must recognise and respect the Constitutional autonomy granted to the states and should not blur the constitutionally drawn boundaries between state and Centre.

Building the GSTN requires us to address the needs and concerns of all those who will be stakeholders in the system.

Small taxpayers cannot be expected to immediately adopt an entirely electronic tax payment and processing system and there should be extensive education and training to make the process as smooth as possible.

Corporate taxpayers tend to operate across the country and have to grapple with different tax regimes in different states. They usually have sophisticated in-house software systems to handle the complexity of tax processing and payment.

These systems must be made compatible with the GSTN by issuing a uniform set of standards to corporate tax software providers. These standards should also be implemented across all states, making it easier for state authorities to collect tax and implement policies.

Tax collection, after all, is about actually collecting money, and hence the Reserve Bank of India and other banks should be able to freely work with the GSTN to get taxpayer information and process payments. 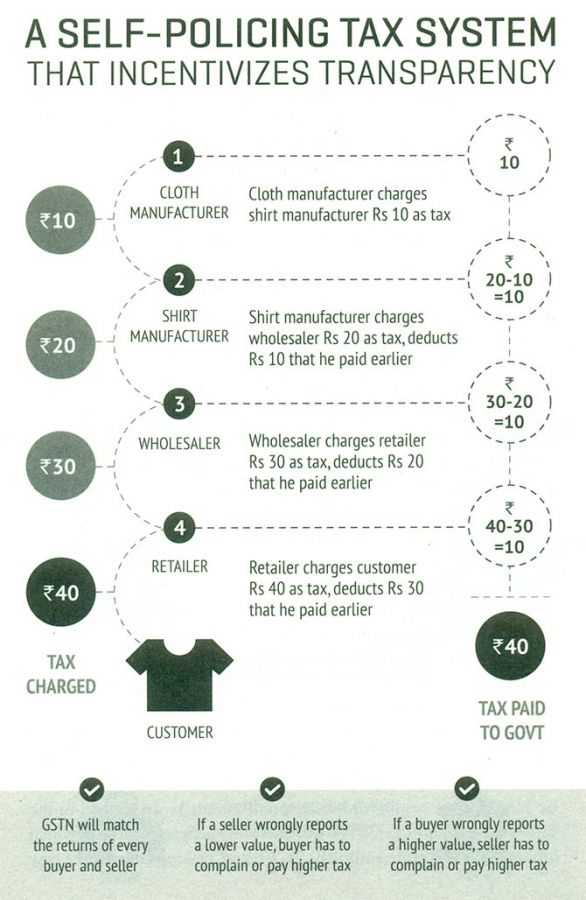 There are four key processes that the GSTN needs to implement, connecting the stakeholders we described above.

The first is the registration of taxpayers. Since the PAN card is already a common ID used for paying income tax, it can be reused for the GST, without going to the pointless trouble and expense of creating a new, GST-specific ID format.

Using the PAN number has the added benefit of reconciling direct and indirect taxes paid by every entity and creating a comprehensive record of every taxpayer's payment history, making it easier to audit payments and catch any instances of fraud.

The second important process in tax collection is the processing of challans. A challan is a payment instrument used to pay taxes to the government. Both the monetary payment and the associated challan are deposited at collecting banks, which then forward them to the respective tax administrations.

Finally, all taxpayers are required to file their returns so that the Centre and states can both assess whether taxpayers have computed, collected and deposited their taxes correctly.

These three processes -- taxpayer registration, challan submission and the filing of tax returns -- can be completely automated and integrated with various tax-preparation software packages.

Beyond these, there are various other processes such as processing of refunds, taxpayer audits and appeals, which also need automation and integration with the revenue collection systems of the centre and states.

The fourth key process, and perhaps one of the most important and interesting ones, is the administration of the interstate GST settlement.

Keeping in line with the destination-based taxation design of GST, in the case of interstate commerce, the GSTN computes how much tax each state owes each other, and settles the accounts of states.

While the GSTN can build this complex system that connects with all the stakeholders, defines all the interfaces and provides a multitude of services to each stakeholder, the business rules -- tax rates, negative lists, special categories and other such issues -- can be decided independently by the government and simply uploaded into the system and even changed as necessary.

Just as in the case of the state-level VAT, all buyers and sellers in the GSTN system will also be linked, raising the barriers to fraud and providing a significant revenue boost for the government.

The GSTN can easily use data mining techniques to detect tax fraud -- for example, the wrongful usage of tax rules or the creation of non-existent dealers to claim illegal benefits -- and plug the leaks that exist in the current system.

Through the use of technology, the GSTN will tip the balance in favour of compliance rather than tax evasion, lowering the barriers for entry into the tax payment system while making it much harder to cheat on payments.

This is the exact opposite of the approaches taken so far, where the emphasis is on vetting users before allowing them to pay tax, while fraud detection systems remain largely inefficient and vulnerable to cheating.

Honest taxpayers will find the new system more transparent, cheaper and far easier to use, whereas evaders will be caught more readily and suffer punishment.

The GSTN works as a self-policing system in which attempts at evasion are automatically flagged, making compliance easy and our tax payment systems transparent.

Implementing the GSTN can lead to an estimated 20 per cent increase in tax collections, which could work out to the tune of Rs 300 billion in additional revenue for the government, enough to pay the annual bill of the nation's Rural Employment Guarantee Scheme. 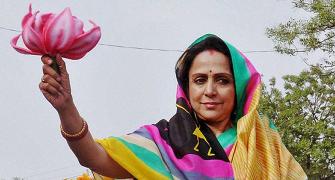 GST hit by controversies but its IT network ready for action