'Sometimes it's better to ask for forgiveness rather than permission,' Zubin Karkaria, CEO of the Kuoni Group and the first Asian to head a listed Swiss company, tells Niraj Bhatt. 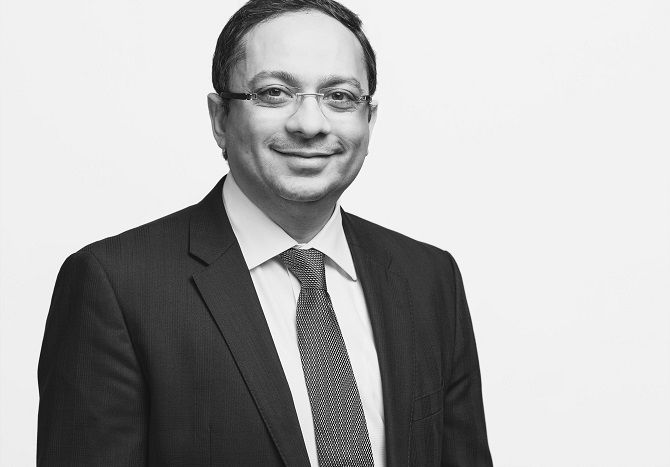 In the past decade, Zubin Karkaria has built a global business of visa processing for embassies spanning 123 countries and can write a book on ease of doing business across the world.

In 2015, he opened visa centres in Suriname and Uzbekistan, got the governments of Brazil and Latvia as clients and formed a partnership to develop the outbound travel business in China. He says both Russia and China are difficult markets to work in, but have high growth potential.

Last November, Karkaria was elevated to the position of chief executive officer of the Kuoni Group, and became the first Asian to head a listed Swiss company.

Karkaria is visiting his hometown Mumbai and we meet at the Cricket Club of India for lunch. He divides his time between the Kuoni headquarters in Zurich and Dubai, where VFS Global and his family are based.

At the Polly Umrigar's Sportsman's Bar, which is empty on this Friday afternoon, we order fresh lime soda and a tandoori paneer.

Kuoni's travel business hasn't been doing well financially for a few years, and the group has been on a cost-cutting drive -- it sold some businesses and even its head office building in Zurich. Intense competition from online players ate into its tour operating business, which it sold last year.

When Karkaria took over as CEO, he realised the company needed two things -- capital and industry experience. "To double our top line to 6 billion Swiss francs, we needed investments in technology, people and growth markets," he says. That's why Sweden's private equity player, EQT, was roped in as the new owner.

"EQT agrees with my strategy and wants me to deliver it," he adds. The private equity fund, which has ties with Sweden's largest business house -- the Wallenberg family -- gave Kuoni shareholders a 30 per cent premium to the market price, and the shares will be delisted.

"Now my task is much easier," Karkaria says. He only has to coordinate with EQT and the Hugentobler Foundation, which was set up by Kuoni's founders.

While VFS Global is already functioning as a separate entity, Karkaria will cut costs and make the other two businesses independent too. This way, each business can have its own growth plan, will be funded separately and get advice from domain experts that EQT will bring.

"My role as CEO of the Kuoni Group is for about 18 months. Once these three businesses are independent, I will go back to VFS Global and build it to the next level."

VFS Global and the hotel booking business could be listed separately in future, while the loss-making group travel business would be restructured but other strategic options would be evaluated.

EQT has a policy of key employees having skin in the game by way of equity, which works for Karkaria and his team. He says he shared his plan with his colleagues and they supported him.

Over grilled chicken, Karkaria tells me he doesn't eat meat on Tuesdays, wherever he is in the world. "For the last 20 years, I have been a regular visitor to the Siddhi Vinayak temple."

Karkaria is also a Zoroastrian priest, and used to earn pocket money in his free time by reciting prayers at a local Parsi fire temple while in school and college.

Karkaria started working part-time in a travel agency his classmate owned, when he was studying management. He then joined the travel agency SOTC, which was taken over by Kuoni in 1996, where he worked across its businesses such as trade fair tours, MICE (meetings, incentives, conferences and events), inbound and outbound tours, and rose within the organisation to deputy CEO.

In 2001, he says, the biggest stress was getting visas for outbound tours. On the other side, the embassies were getting negative press, with photographs of people queuing up at night or standing in the rain.

He floated the idea of taking care of the documentation at the US embassy, and it agreed to a pilot. Washington sent State Department staff to verify the security checks and the process and extended the pilot to a year.

New Delhi and Chennai too were added, and VFS was born.

"My objective was to take VFS to other missions," he says.

He got on the road and started making presentations to other embassies in India. Two years after the US pilot, small contracts started coming in and by 2005, Kuoni India was processing visas for 11 client governments in India including the UK, Canada and Australia, and Karkaria became CEO and managing director of the company.

In 2007, the UK government outsourced visa processing across 33 countries to Karkaria's operations, and that's how the global foray began.

I ask how difficult it was to convince Switzerland about getting into this business. "When I was handling the India part, it was under Kuoni India, and when we got the US contract, they started believing in us," he says.

As CEO, he didn't have to tell headquarters that he was bidding for the UK contract. He had a good relationship with the board and Kuoni India was doing well under his watch, he says.

After bagging the contract, he did have to go to the board for approval, and says, "Sometimes it's better to ask for forgiveness rather than permission."

After that the business took off, and he headed the visa business globally. VFS Global also planned an initial public offering in London in 2011, but it had to be pulled off at the last minute.

People saw the profits VFS was making in the IPO documents and Karkaria says that's when competition started coming in the business.

Karkaria visited about 100 countries and shares his travel experiences over coffee. He went to Libya last year to close the visa centre. In Erbil (approximately 350 kilometres north of Baghdad), he was walking on the road and was surprised to bump into a fellow Zoroastrian.

On July 14, 2016, he had dinner with the owner of Noori's, an Indian restaurant in Nice, France, who he knows from his tour operator days. The Kuoni chairman, who was with him, and Karkaria saw the Bastille Day celebrations and fireworks and walked back to the Hyatt where they were staying.

Within a few minutes of entering their rooms, a truck driver ran over the crowd on Nice's beachfront Promenade des Anglais and was shot by the police just outside the Hyatt. "It was the saddest sight of my life," he says. "I tell my children how fortunate they are to be in the better part of the world."