In mourning Jaitley, we also mourn for ourselves 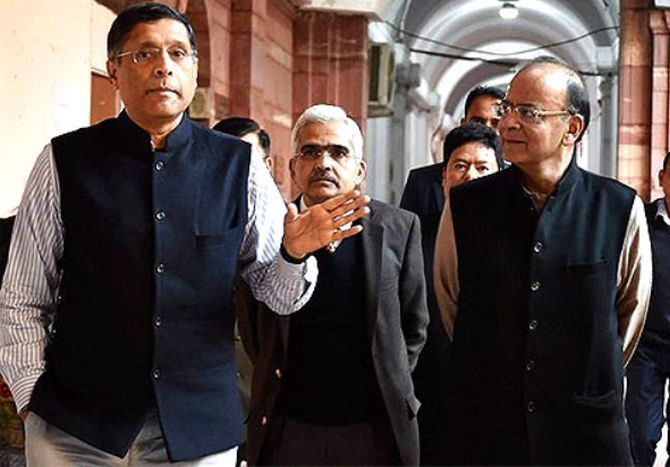 IMAGE: Dr Arvind Subramanian, then chief economic advisor to the finance ministry, left, with then finance minister Arun Jaitley. In the middle is Shaktikanta Das, then the economic affairs secretary and now the Reserve Bank of India governor. Photograph: PTI Photo

Arun Jaitley, the former finance minister and politician of considerable consequence, is no more.

It is an immeasurable loss for the country, marking the end of an era, the age of moderation in civic life, when it was still possible to doubt the Nietzsche dictum that power is never held in innocence.

Jaitley was amongst the more enigmatic of recent politicians.

I tried to shed some light on his stint as finance minister a few months ago; here, I want to share something even more personal.

Politicians don’t “do intimacy” very well. As a matter of fact, they shun it very consciously. And for good reason.

Politicians want to exude confidence and infallibility. But intimacy leads to vulnerability, since confidences can be fatal if they are betrayed.

So, one of the privileges of my association with him was to get just a glimpse of the personality behind that guard, of the man manning the politician.

Still, I can’t say with any confidence that I cracked the enigma that was Arun Jaitley.

When Jaitley was first treated in New York for his illness, he exuded the quiet confidence of a man who believed that he would overcome this disease as he had several others in his life -- diabetes, bariatric surgery, renal transplant.

But sadly, that confidence was missing once the most recent medical complications emerged.

He left the government and retreated to his home in Kailash Colony, honourably -- and uncharacteristically for modern-day politicians -- giving up his large official house and many of the perks that came with it.

And when visitors came, he wanted to reflect on the larger issues that concerned him.

In June, his eyes were glued to the World Cup cricket match playing on the TV screen. But he was nonetheless in an expansively reflective mood, talking about his health, the challenging state of the economy, and his core life values.

Three values, drawn from different religions, appealed to him, he said: Karma, the linking of action and consequence; compassion for others; and the spirit of social service.

In July, he was visibly more frail and the conversation dwelt more on his health.

What memories will I carry of Arun Jaitley? Obviously, his political skills.

His brilliant intervention in Cabinet that persuaded the doubters that the somewhat radical recommendations of the 14th Finance Commission should be adopted, to preserve Constitutional propriety.

The deft manoeuvring with opposition politicians in the Centre and politicians of all stripes in the states, enabling the GST to be passed into law.

The patient presiding over long and tedious GST meetings that helped build the tradition of decision-making by consensus in the GST Council.

I'll also remember his generous spirit and concern for others, which would lead him to intervene time and time again for worthy causes.

For example, on behalf of my colleagues for medical help or to get land allotted so that junior Indian Economic Service (IES) officers could live in decent housing.

There was also a phone call to help restore the Ramkinkar Baij statues at Santiniketan.

Nothing illustrates that core decency and thoughtfulness of Arun Jaitley as the planning for his daughter's wedding.

The main reception was a roll call of India's Who's Who, from politicians, sportsmen and titans of industry to Bollywood stars, lawyers, and media moghuls.

But Mr Jaitley made sure that the nearly 2,000 drivers, who had ferried these rich and famous to the event and who were braving the cold Delhi December night in dispersed parking spots were not forgotten: All of them received hot meals and were kept warm with cups of hot tea.

On a personal level, I will never forget my first meeting with him, characterised by a quick sense of our mutual liking, followed by a midnight call asking me to come immediately to take over the job of Chief Economic Advisor.

The lunches in his office after he became ill, when he, the legendary foodie, could only peck at plain paneer and boiled egg while he offered me multiple, sumptuous dishes.

The affectionate way he would greet me every time I entered, even barged into, his room; and his gentle ribbing about my “liberal friends”.

Perhaps most important, I will remember the engagement with my ideas -- even when he publicly disagreed with them, such as on the bad bank, universal basic income, and a simplified GST rate structure.

The support he gave when I had to straddle the conflicting tugs of loyalty versus objectivity.

The long conversations we had in his living room at 2 Krishna Menon Marg, in his stately office in North Block, and especially in the small, dark adjoining chamber to which he would retire for his afternoon siesta.

I knew something insightful or intimate (or juicy) was coming when he began “Arvind, main tumhe ek cheez bathaoon…”

Arun Jaitley will be badly missed.

He was articulate, master of the brief, the shepherd of many a successful legislative effort, the man who midwifed the GST, and the indispensable Rajya Sabha politician-parliamentarian who had more influence than perhaps he himself realised, while wielding it less than he perhaps ought to have.

Above all, he was humane, helping, and helpful.

We consequently mourn for him deeply.

But we also mourn for ourselves, conscious that his sharp mind, sober head, and restraining hand will forever be unavailable as India navigates its uncertain economic and political future.