The oil crisis could not have come at a worse time for the Modi government as its tax collection has fallen short of its 2020-2021 target by Rs 5.2 lakh crore. 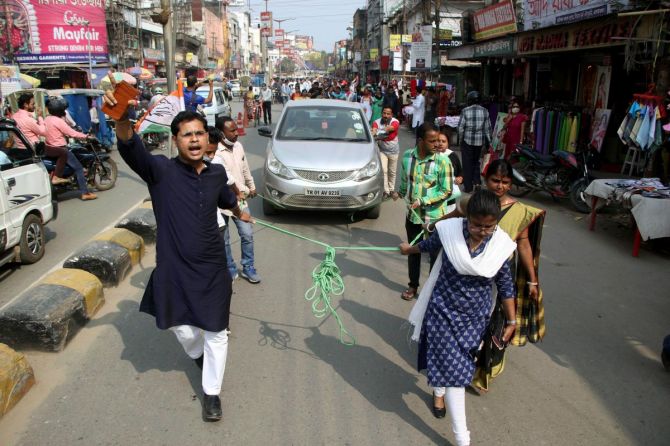 On February 16, India's leading oil marketing company -- Indian Oil -- posted a table on its Web site stating the basic price of petrol and the taxes levied on them.

Taken with the taxes and other charges, retail users in Delhi were paying Rs 89.29 for petrol and Rs 95.75 in Mumbai.

In Sri Ganganagar, Rajasthan, the price of petrol was Rs 99.87; thus, an end user there was shelling out Rs 67.77 more than the base price listed by IOC on its Web site.

As the price of petrol touches Rs 100 and diesel Rs 90 across the country, the question uppermost on everyone's mind is: Why is the government not intervening and reducing the tax on fuel prices to benefit the middle class?

"The rates of excise duty and cess on petroleum products, imposed by the central government, are abnormally high. Prevailing international crude prices do not justify such high retail prices of petrol and diesel. The reason why retail prices are touching Rs 100 per litre today is because of indirect taxes. It is up to the central government to cut down excise duty and cess to reduce oil prices," says economist Prasenjit Bose.

However, Prime Minister Narendra Damodardas Modi on February 17 put the blame on previous governments (read: United Progressive Alliance) for the rise in fuel prices, stating that they did not have the vision to reduce India's dependence on energy imports.

This week the crude oil barrel price is ranging at around $63 plus.

It means an increase of 50 per cent in price per barrel in just four months -- clearly adding to the Modi government's revenue collection worries.

The situation worsens as Saudi Arabia has decided to cut its oil output while a snowstorm in the United States has halted production there, putting oil prices in the region of uncertainty.

'I am appealing for easing of production cuts by the key oil exporting countries,' Pradhan told the symposium.

The oil crisis could not have come at a worse time for the Modi government as its tax collection has fallen short of its 2020-2021 target by Rs 5.2 lakh crore.

Budget 2020-2021 had estimated Rs 24.2 lakh crore in gross tax collection, while the actual realisation is expected to be around Rs 19 lakh crore.

Asked whether the shortfall in revenue was forcing the government to mop up huge taxes on petrol and diesel, economist Prasenjit Bose asks, "It is a soft option. Why can't they increase the corporate tax rate and introduce wealth tax?"

"Financial markets are doing well and wealth inequality is increasing. So why not introduce wealth tax, rather than squeeze taxes out of the petroleum sector in a disproportionate and unfair manner," Bose argues.

As the government looks helpless, Ppposition parties are hell-bent on cornering the Modi government on the issue by stating protests and rallies across the country.

Prices of essential commodities is skyrocketing. This bankrupt Govt is managing only by taking huge loans & taxing fuel exorbitantly!'

"Tax policy should not be tinkered based on whether the prices of petroleum products are going up or down," says Professor N R Bhanumurthy, National Institute of Public Finance and Policy. "The tax policy needs to be stable, otherwise the tax authorities will be working day in and day out tinkering at tax rates and margins."

"Right now, we know that domestic price rise moves in tandem with international oil price. That is the expectation that has been formed and I don't think one should disturb that. Having said that, one definitely understands that this falls under household budget but we cannot (&reduce tax) in a haphazard way," Professor Bhanumurthy adds.

"One has to wait and watch how international oil prices move and accordingly take a call."

Pointed out that during UPA rule oil prices had reached $140 a barrel but the domestic price did not go beyond Rs 70 a litre, unlike now, Professor Bhanumurthy says, "That is very unfair logic. It means we have to go back to the old kind of mechanism where we know subsidies create negative incentives for consumers."

"Moreover, diesel and petrol are not part of the common man's consumption basket. I don't think subsidies should be continued and given to consumers who operate cars. Why should you and me get subsidy on petrol? the professor asks.

"The Budget presented this month was growth-centric. And one of the best parts of the Budget was that there is a significant reduction in subsidies. That money has been spent on capital expenditure. Petroleum prices for obvious reasons should not become a part of the political discourse," he says.

Asked how the end users were paying less for petrol and diesel back then, Purohit explains, "What the UPA government did was they purchased oil from Iran and Iraq and in return we made payment in Indian bonds that were due for payment 10 years and 20 years later."

"In 2016 we had to redeem the bonds and so made the payment in dollars. And that is the reason when Brent crude prices decreased we are unable to cut down the taxes on fuel and pass on the benefit to consumers."

"Look at the level of corporate taxes that were collected during the UPA's time as a proportion of GDP and compare with what is happening today," says Bose.

"A steep cut in corporate taxes was announced in September 2019. Cutting taxes for the rich while increasing duties on an essential fuel such as diesel which is used by farmers to run tractors and pump sets is unfair."