What matters is the culture and the atmosphere of the workplace, and whether employees get treated fairly.
'It is also important for the employee to feel s/he is part of a winning team,' Credit Suisse's Mickey Doshi tells Niraj Bhatt.
Illustration: Dominic Xavier/Rediff.com 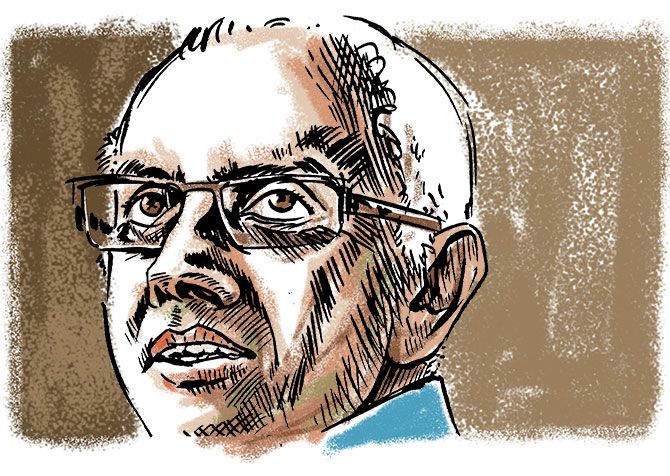 The first question I ask Mihir 'Mickey' Doshi at our lunch meeting at By the Mekong, a Chinese restaurant in The St Regis, Mumbai, is what his clients are thinking as the stock markets have been falling in the past few weeks.

Foreign investors, he says, are optimistic about India and believe that the government is doing the right things.

There are some concerns about the general elections and some possible slowdown because of that.

"Otherwise, their perception of emerging markets and equity markets in general remains positive," says he.

India's consumption story has always existed, but much-needed investments will only come from infrastructure spending by government in the form of roads, metros, airports and railways.

"The investment cycle has to turn," he adds.

Moreover, capital raising on the debt side is happening, and the equity capital market calendar is robust on both the initial public offerings and qualified institutional placement fronts.

"My outlook for the capital markets for the next 12 to 24 months is very positive," he adds.

We place our order for starters -- wild mushroom and edamame truffle dumplings -- when Doshi explains what's on his mind. He talks about his coming trip to Japan where he worked for seven years.

"It is cherry blossom season and my wife and I are taking four friends, and we will show them around," says Doshi, who is heading there after a decade.

After finishing Class 10 at the Cathedral and John Connon School in Mumbai, Doshi moved to the US. His father, who had studied in the US, wanted his two sons too to go there for education.

"My father was at the top of his game as CEO of the western region in M N Dastur." When his father told his boss about moving to the US, the engineering consulting firm opened a branch in New York for him.

Doshi skipped Class 11 and 12 and joined college. He accelerated through his degree from New York University and completed it in three years instead of four.

In 1981, he joined Deloitte and became a CPA (certified public accountant). Three years later, he joined Morgan Stanley in accounting with the sole purpose of moving to the front office or going for an MBA.

"I never intended to practise as an accountant, it was a stopgap before going to business school," Doshi says.

The head of Morgan Stanley's foreign exchange trading gave Doshi recommendation letters to two schools -- Harvard and Stanford -- and told him that if he got in either school it was great; else he would give Doshi a job as a forex trader.

He didn't get admissions, and a few months later in 1985 he was trading forex in Morgan Stanley's Tokyo office.

After a three year stint, he moved to New York for two years and returned to Japan in 1991.

Four years later, Vikram Pandit, who was heading Morgan Stanley's global institutional securities business, asked him to join the firm's India business, which was being set up, and he returned to India where he headed the broking business.

Doshi stresses the role of relationships in the business, and being there for the client in his time of need.

And that's what helped him build Credit Suisse, which he joined as CEO in 2006, into a leading investment bank in the country.

"I may not understand the nuances of the product, but my team does. I understand clients," Doshi says.

He knows many top industrialists and CEOs on the corporate side and global investors as well, and spends many an evening attending dinner parties for networking.

Our lunch of edamame fried rice, hakka noodles, and braised eggplant in hot garlic sauce arrives as Doshi delves upon investment banking and how it is a people's business.

"I believe in hiring the right people who are young and ambitious, which has worked both at Morgan Stanley and Credit Suisse," Doshi says.

However, people also underestimate the importance of the institution -- a young, hungry person with the backing of an institution is the best combination.

How does he keep them motivated?

"You know money is always important in our industry, but employees should enjoy coming to work every day," he says.

What matters is the culture and the atmosphere of the workplace, and whether employees get treated fairly.

"It is also important for the employee to feel he or she is part of a winning team. In all our businesses we try to make sure that we are a top decile house or in the top three," he adds.

When Doshi came to Credit Suisse, the broking industry was highly competitive, and he quickly built a team of young research analysts.

"In equities from day one, our research was a differentiator. You'll see us ranked in the top three over the past decade," he says.

Investment banking took a lot longer to build though.

"The first six-seven years were tough as markets went for a toss after the Lehman Brothers crisis," he says.

In the last three years markets have picked up.

"We have also got more established, there are more products, and a great team of bankers."

Investment banking and broking are cyclical businesses and layoffs are a routine affair during bad times. Doshi is conscious of this, and runs a tight ship.

"We have always been fairly lean, and that has held us in good stead," he says.

He believes that employees should see the business as their own and be prudent on expenses, without being penny wise and pound foolish.

Credit Suisse offices are nice and functional, but not extravagant like some of its competitors.

"If you can get to an investment banking client via the entrepreneur, it is ideal. We have that benefit."

At the time of hiring Doshi, Paul Calello, chairman and CEO of Credit Suisse Group's investment banking division, had told him that in five years, he would be able to say that he built an institution from scratch.

"He was spot on. It had its frustration in 2007, and then 2008 happened. India went through tough times in 2012 and 2013. But as I look back I can say I enjoyed it for sure. I have no regrets and it continues to be a great and enjoyable ride," Doshi says.

However, he wishes that he had gone on to do the MBA, though he says, he has reached the corner office without the degree.

Doshi says his elder brother Viral, an education consultant specialising in admissions to Ivy League colleges in the US, has been his mentor.

Viral nudged Mickey into losing 10 kilos in 1981 and gave him advice on joining Deloitte, Morgan Stanley and wearing Brooks Brothers.

I ask him what he likes about Japan and its culture.

"As a nation, they believe that what is good for the country is good for everyone, and they have worked towards a common goal over the past few decades to become a powerful global force," he says.

According to him, the Japanese work ethic and discipline are worth emulating despite the criticism.

"I can't wait to go," he says excitedly as our lunch comes to an end.