Despite populist rhetoric and promises, the Budget was a mild disappointment. Yet, the bull run continues, says Devangshu Datta. Somebody once compared the Budget to the monsoon. Like the rains, the Budget is preceded by all-round expectations, everybody plans for it and it has an enormous impact, for good or ill. This Budget proved to be a mild disappointment.

It contained lots of populist rhetoric, and promises of jam tomorrow, and jam day after. But there was no jam today. Service taxes were raised, and a surcharge imposed on corporate tax. Fertiliser and food subsidies increased by small amounts, while the petro subsidy was halved.

The Plan Expenditure 2014-15 was cut by over Rs 1,07, 000 crore (Rs 1,070 billion) to hold the fiscal deficit to near 4.1 per cent of gross domestic product (GDP). Tax collection targets were missed by miles. It is possible that 2015-16 collection targets will also be missed since these look rather optimistic at a nominal growth rate of 16 per cent.

Fiscal consolidation measures were postponed. The deficit will be held at 3.9 per cent of GDP. That delayed consolidation has a concrete impact: sovereign credit ratings do not improve. In turn, that means some impediment to foreign direct investment inflows and it means Indian remains outside the orbit of overseas funds with conservative mandates.

There will be reliance on several factors remaining favourable. Telecom spectrum auctions will need to pull in high bids. Divestment will also have to hit targets. Public sector undertaking stake sales will have to be well-timed and well-managed with a large number of companies due to be put on the anvil. This presupposes that the stock market continues to be bullish. Another variable, crude prices (and by association, gas and coal prices) must stay near current levels, or ideally, fall further. 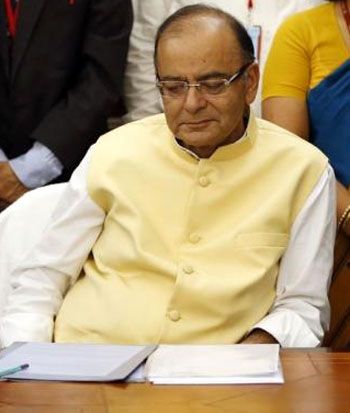 However, inflation is falling, the current account deficit is below 2 per cent, the rupee is stable and the economy is definitely accelerating, despite disbelief about the new GDP estimates. Global investors don't have too many attractive emerging market destinations and India looks the best place to park at this instant. Inflows continued to be positive post-Budget.

There is confirmation that the focus on infrastructure will remain. Unfortunately, it doesn't look as though the ordinance amending land acquisition is going through the Rajya Sabha. The Bharatiya Janata Party's approach to this may need to be tweaked again.

There are interesting proposals on the monetary front. First, the Budget sets an explicit inflation target of 6 per cent (consumer price index). This will supposedly be managed by a joint monetary policy committee, including finance ministry and Reserve Bank of India (RBI) nominees. There are fears that such measures could reduce RBI's autonomy. The devil will lie in the details of the committee's formation and brief, and also in the specific amendments of the RBI Act.

The central bank liked the Budget. The RBI made an unscheduled cut of 0.25 per cent basis points on the repo rate following Arun Jaitley's speech. This was the second unscheduled cut in calendar 2015 and it pulls repo down to 7.5 per cent, a level last seen in September 2013, when Raghuram Rajan took charge. The market responded to the cut by zooming up to new record highs and then coming down again with broad profit-booking.

In its policy statement along with the cut, the RBI did mention its fear of "spillover of excessive volatility from international financial markets". This will continue to be significant. The European Central Bank (ECB) starts its bond-buying euro 1 trillion Quantitative Easing today. Europe may be past the worst since business growth hit a seven-month high and the ECB has upgraded forecasts.

Russia's central bank meets on Friday to take a call on the beleaguered rouble and the Ukraine is hoping that an International Monetary Fund rescue package goes through. There is potential for turmoil here due to Russia's influence on crude markets. Meanwhile, US payroll data indicated that employment continued to grow setting up fears that the Fed will raise rates sooner than hoped-for. And, China cut its GDP estimates to 7 per cent - the lowest since 1990. 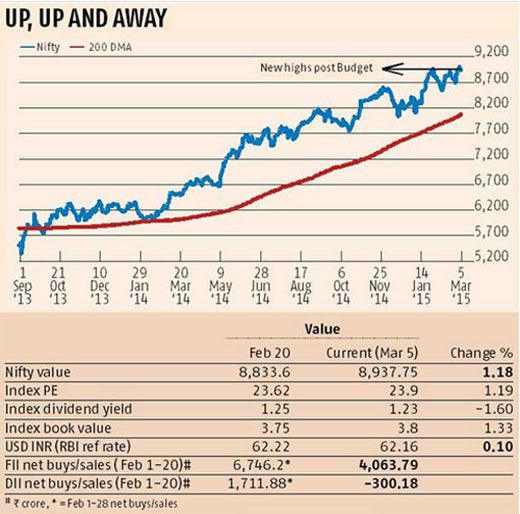 Taken together, the RBI strategy of building large reserves and managing volatility looks common sense. So long as inflows continue, it will be more about ensuring the rupee doesn't appreciate to non-competitive levels.

Technically speaking, India's stock market indices - the Sensex, the Nifty and the CNX Midcaps - have all hit new highs since the Budget. That means that the bull run continues, by definition. Earnings growth was low through Q3 (October-December 2014) and Q4 is not expected to be much better. All the optimism is based on hopes of corporate activity and consumption picking up in 2015-16.