Aditi Phadnis brings us a ringside view of the reactions Jaitley's speech generated in Parliament. 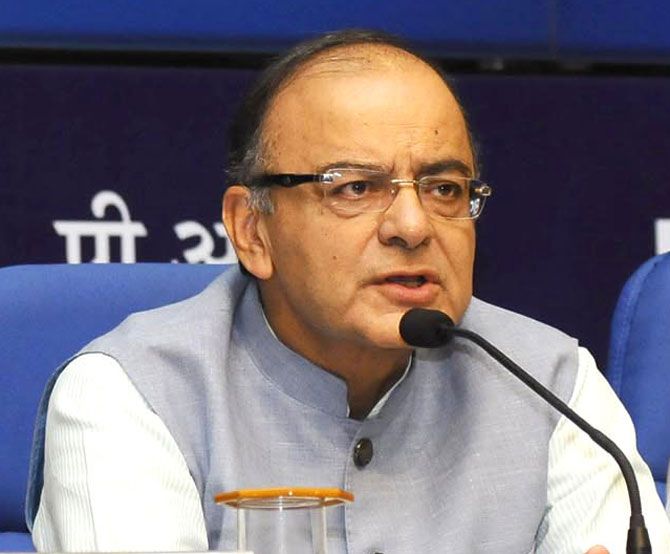 Loosely translated, the couplet that Finance Minister Arun Jaitley used to illustrate the big idea in Budget 2016-17 said: ‘Tired and defeated, they handed the oars to us. We found ourselves in the midst of tempest and a raging tide but we did and we will any time show that we too know how to conquer choppy waters’.  When he read it out, a small smile played on the face of his son Rohan, in the visitor’s gallery.

The finance minister’s family – his wife, daughter and son in law and son, settled themselves in the Lok Sabha gallery, among the first to be seated. They saw, somewhat wide-eyed, the attempts of the Congress to raise the issue of sedition cases registered against Rahul Gandhi and others in Hyderabad, Rahul Gandhi’s grimace when the rebellion failed and Jaitley’s firm push ahead with the budget speech.

The loudest applause was reserved for Jaitley’s announcements concerning the farm sector. Minister for Food Processing, Harsimrat Kaur Badal essayed a small salute to him when Jaitley said that 100 per cent Foreign Direct Investment (FDI) through the FIPB route would now be allowed in the marketing of food products produced and manufactured in India.

But the biggest applause was reserved for announcements relating to the creation of rural infrastructure, especially from the MPs from Karnataka and Maharashtra, the two states that have seen a third year of drought: the Pradhan Mantri Gram Sadak Yojana that seeks to connect all the villages in the country with all-weather roads in the next two or three years; budgetary support to MGNREGA amounting to Rs 38,500 crore (Rs 385 billion), the highest in the last few years; and the Pradhan Mantri Fasal Bima Yojana (PMFBY) the crop insurance scheme.

Another announcement that was popular was the electrification of all villages in India. Power Minister Piyush Goel went pink as the finance minister spoke approvingly and fondly about his work and the fact that he had achieved targets well ahead of their deadline.

The visitor’s gallery was almost full but the Distinguished Visitors Gallery – to which invitations are issued by the Speaker – was packed to capacity. Those present were clearly supporters of the finance minister, for his wife greeted all of them with a clasp of the hand.

The Foreign Visitors gallery was inhabited by representatives of two countries – Sweden, which was India’s partner in the Make in India campaign in Mumbai; and unaccountably, Zambia.

Introducing himself to Business Standard, the representative of that country told his Swedish colleagues sotto voce: "I wanted to see the reaction when I named the country I come from". Zambian nationals suffered racial abuse both in Delhi and Bengaluru.

The Budget got the special notice of those among MPs who are professional chartered accountants: while Bharatiya Janata Party MP Kirit Somaiyya took furious notes, Railway Minister Suresh Prabhu nodded several times when Jaitley read from the second part of his speech while Power Minister Piyush Goel thumped the table emphatically.

The finance minister delivered a large part of his speech on his feet, but had to sit down wearily for a part of it – however the congratulations that poured in after the speech obviously revived him.