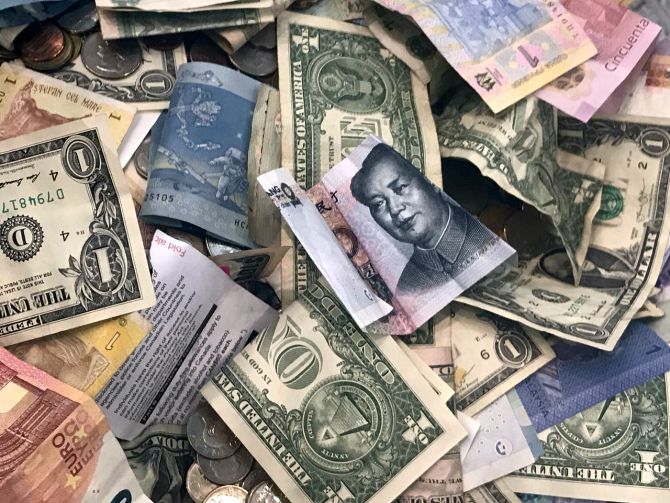 “My grandfather left this world peacefully aged 91. I will not live anywhere as long at the rate I am wining and dining bankers for business. If I get a good deal, I will sell out,”  says Gautam Ashra, managing partner at Kanji Pitamber & Co, set up in 1933.

The finance ministry’s big-bang merger of four sets of state-run banks is set to squeeze the blood out of dozens of time-worn forex brokerage firms; and many will have to wind up.

Business is expected to fall after the mergers - of Punjab National Bank, Oriental Bank of Commerce, and United Bank of India; Canara Bank and Syndicate Bank; Union Bank of India, Andhra Bank, and Corporation Bank; and Indian Bank with Allahabad Bank.

Forex brokerages - close cousins of the outcry artistes on the bourses from a bygone era - have survived largely due to an archaic Reserve Bank of India (RBI) regulation.

In the aftermath of the Harshad Mehta scandal, the central bank stipulated that no bank can put more than five per cent of its business through a money and securities dealing firm.

It was never meant to cover forex brokerages, but the lack of regulatory clarity saw it come into play - not five per cent but, say, not more than 10 per cent through a single entity.

And the brokerage itself is nothing to crow about.

The mood is so low that only a dozen firms of the many tens in the business attended the last meeting of the Foreign Exchange Brokers’ Association (Feba), the lobby group of voice-brokers.

Says Parag Mehta, managing partner of F R Ratnakar & Co and chairman of Feba: “The sense I got is why should one bother to attend the meeting when nothing much is to be gained by showing up.

"So, let us continue doing with what we are doing.”

Adds Ashra: “People think we are rolling in money given the glamour of forex. A firm may put through a $100 million in trades a day and still not pocket anything significant.”

The fear is banks can arm-twist going ahead to get even better pricing.

Some of the bigger banks anyway seek and wrangle discounts of nearly 50 per cent even if this means losing out on the fine rates offered by brokerages as this helps them trim the expense account.

Of the daily turnover of $ 40-odd billion (spot plus forwards) -- only about seven per cent is put through these firms.

The matter was taken up with officials of the Foreign Exchange Dealers’ Association of India, but brokerages were told bank mergers were policy decisions taken way higher than their (officials) paygrade.

“Let me be honest. Other than for reasons of nostalgia, why should anyone bother about us?

"In any case of the merging banks, only PNB, Syndicate Bank and Canara Bank gave any meaningful business to us,” rationalises Mehta.

It’s unlikely Ashra will be as cold; for nostalgia matters a lot for him.

Says he: “My grandfather used to run from bank to bank in Mumbai’s Fort area as a young man taking orders for dollars and pounds.

"There were no hotlines back then, and this may surprise you, nor were bicycles very common those days.”

The plot ahead is expected to mirror the global markets where a clutch of firms now operate - Tullet Prebon, Icap or an Exco.

Ashra and Mehta point out that the local market will see a spate of mergers like what happened globally.

Tullett & Riley merged with Liberty Brokerage to create Tullett Liberty in 1999. Four years later, it was in the belly of Collins Stewarts - Collins Stewart Tullett Plc.

In 2004, it bought Prebone Yamane, which was itself the result of the 1990 three-way merger of the London-based money brokers - Babcock & Brown, Kirkland-Whittaker and Fulton Prebon.

They now hire hundreds of dealers, and have added money markets, bonds and gilts broking to their bouquet.

As for local consolidation, deals have been far and few.

The last big transaction was the Nasdaq-listed Ebix’s purchase of the Centrum Group’s forex business - Centrum Direct - for about Rs 1,300 crore.

But then, Centrum Direct was also into overseas remittances, prepaid travel cards and traveller’s cheques.

No forex brokerage has such a business footprint, and the last deal among voice-brokers was in May 2018 when Crest Ventures purchased the 48 per cent stake held by Prebon Holdings BV in Tullett Prebon (India) for Rs 4.52 crore - in  cash!

Such poor valuations will be the norm as the business itself has undergone a huge change.

A good part of the trade is on the e-platforms of Reuters, Bloomberg, J P Morgan, Barclays or Deutsche Bank.

Old-world forex brokerages may soon be out of money.